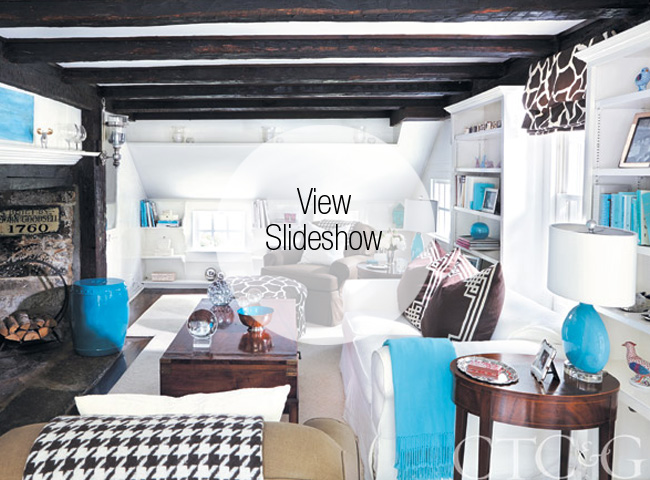 Before renovating her Westport antique home (which was showcased in last year’s Near & Far Aid house tour), designer Jennifer O’Reilly followed a time-tested piece of advice: She lived in it for a year.

“So many people renovate right away or even before they move in, and then they have different ideas,” she says. “I spent a full year trying to figure out what was best.” The upshot? “If I had to do it all over again, I wouldn’t change a thing,” she says. Built in 1760 by the sons of the Rev. John Goodsell, the first minister of the Greenfield Hills Church, the former tollhouse is a registered historic landmark; it was here, on the Aspetuck River, that farmers would stop and pay the fare to bring their goods to the port in Saugatuck. Though the original saltbox structure remains intact, the property underwent several additions beginning in the 1930s. By the time O’Reilly came on the scene, it had fallen into disrepair—there was mold on the beams, and the gardens were overgrown. “It was not in great shape,” she says. “But I could see through it all; the bones were beautifully maintained.”

For O’Reilly, a Westport native, the goal was to restore and update the interiors without losing any of the home’s antique charm, including the original chestnut wood floors and wrought-iron hardware. But first she had to go through a painstaking approval process with the town’s historic district commission. “They had a lot of boxes to check,” she recalls. Many of the fixes were cosmetic—she replaced the asphalt roof with cedar and painted the exterior white. The biggest challenge was the kitchen and bathroom, a poorly designed 1940s add-on with a pitched shed roof that tapered down to about five feet, and no foundation. “When it rained, the mud came up through the bathroom floorboards,” she says.

O’Reilly hired Westport-based contractor Ryan Burke to spearhead the renovation, which involved digging a proper foundation, raising the roofline and taking down most of an antique barn-wood wall that separated the kitchen from the den. The reconfigured space, which now comprises kitchen, mudroom and powder room, has a bright, contemporary feel. And it’s practical. “I can be cooking dinner and watching the Giants, which is very important to me,” she says with a laugh. Additionally, a “horrible little laundry room” was transformed into a snug home office and bar, with Phillip Jeffries grasscloth walls and a turquoise sunburst mirror, which is “happy and different in a very tan room.”

The relaxed yet sophisticated vibe carries through to the rest of the house, including the rooms that date back to the 18th century. A massive stone fireplace—big enough for five people to stand in comfortably and the home’s original kitchen—commands center stage in the beamed living room (formerly the parlor). “I remember walking in and telling the broker if that thing doesn’t work, it’s a deal breaker for me,” she says. The tavern-style dining room has its original chestnut wood paneling and stone hearth. “Nothing in there is level,” she says. “You could not play pool in that room.” To brighten it up, she painted the fireplace surround and insides of the corner cupboards white and hung oil paintings of local beach scenes on the walls.

Furnishings throughout are modern and comfortable: a pair of club chairs covered in Scalamandré fabric and a Calypso sofa in the living room; a vintage daybed in the master bedroom; teak and bamboo in the three-season sunroom. “I wanted to bring the house into the 21st century,” O’Reilly says. “I didn’t want dainty, uncomfortable furniture.” She also incorporated mirrors and reflective surfaces in nearly every room to create the illusion of space, painted walls and ceilings a high-gloss white to “cheer things up,” and added pops of turquoise.

“My old house was hot pink and orange with lots of patterns everywhere, and I really wanted something calm,” she notes. Case in point: the serene master bedroom with its vaulted ceilings, linen white walls and muted color palette of stone and sky. “At the end of the day, I just wanted to be able to go in there and melt,” says the designer.

A version of this article appeared in the March 2015 issue of Connecticut Cottages & Gardens with the headline: Tollhouse Transformation.

Hagar was the lead singer for the hard rock band for over a decade, but his California home is far more tranquil than his past concerts.