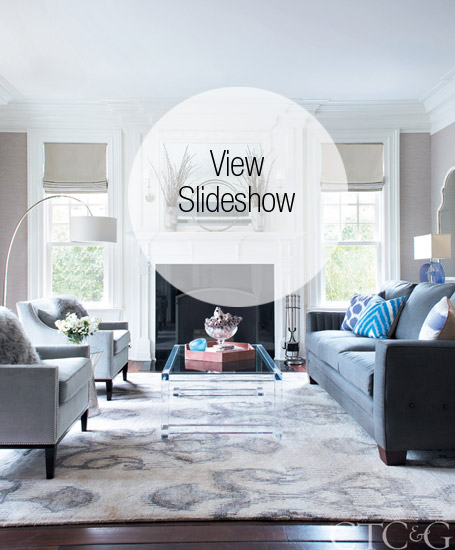 IT’s a common conundrum that most modern-day parents can easily relate to: that moment when a couple realizes that their lives are more about getting their kids to eat their vegetables than getting a table at Per Se. For a couple in Greenwich, the solution on how to merge their sophisticated taste with a kid-friendly environment was found in a surprising place, the hair salon. One of designer Julie Nightingale’s projects was featured in a magazine that her would-be client happened to be flipping through. “I loved the house—every single page. I called her, and we hit it off immediately,” the homeowner says.

The clients, a couple with three young kids (one born while the project was in progress), lived in the house for a couple of years with furniture from a previous home while they figured out what they wanted to do. It was Nightingale’s fresh approach and easy elegance that caught her eye. “The previous owners were very traditional and had a dark color scheme,” says the client. “I wanted it to be cleaner, fresher and brighter, but I didn’t want to be scared for my kids to go into certain rooms.” Once Nightingale was on board, they quickly agreed on a color scheme and the direction the decor would take. “The architecture and scale of her house are quite formal,” Nightingale says. “I didn’t want to remove all of the sophistication and formality, so we kept the decor elegant but still easy and kid-friendly.”

Design boards done, but not a single piece of furniture ordered, Nightingale—in a rather unconventional approach to her usual process—took her clients on an art-buying mission. “We had an idea of where we were going, but nothing had been ordered yet when we went on an art buying spree, which is what I usually do at the very end,” says the designer. “They have high ceilings and lots of walls, and I knew there was an opportunity there.”

Designer and clients set out for the Hamptons, where Nightingale’s sister-in-law, Sara, has a gallery—the Sara Nightingale Gallery in Water Mill. “The clients were [relatively new] collectors, but they were amazingly receptive to the conceptual aspect of the art they purchased. They ‘got it’ immediately once we explained the artists’ processes and intent. Their primary goal was to furnish their house with strong, interesting artwork,” notes Sara. “I’m not particularly keen on the name-dropping that so often drives the art market. I want them to react viscerally to the work, rather than being told by their consultant that they need to invest in this or that ‘hot’ artist. I want to teach them how to look at art in general, so they can go out in the world and collect some more!”

The homeowners ended up with more than 30 pieces by artists such as Ross Watts, Barbara Erdmann and Perry Burns. “It’s fun to push the envelope with more contemporary art in a traditional setting,” notes Julie Nightingale. “A big part of my approach is not to be ‘matchy-matchy.’ If you have amazing artwork, you don’t have to decorate around it, you can decorate to complement it.”

The designer used pale, cool colors throughout. Layers of subtle grays and creams with pops of muted jewel tones keep the interior elegant without looking stuffy. And like most successful interiors, it’s the mix that makes them shine. The living room, for instance, is a study in textures: grasscloth with subtle shine on the walls, cut glass stools, a bamboo silk ikat rug. Sofas are covered in a spill-resistant coated linen. “They have three young children. It had to have an element of practicality to it,” Nightingale says. It’s just that durability married with an easy sophistication that makes this house a home. “It’s elegant but lively and liveable,” says the client. “I finally feel like it’s my house.”

A version of this article appeared in the November 2014 issue of Connecticut & Gardens with the headline: Cool, Calm & Collected.