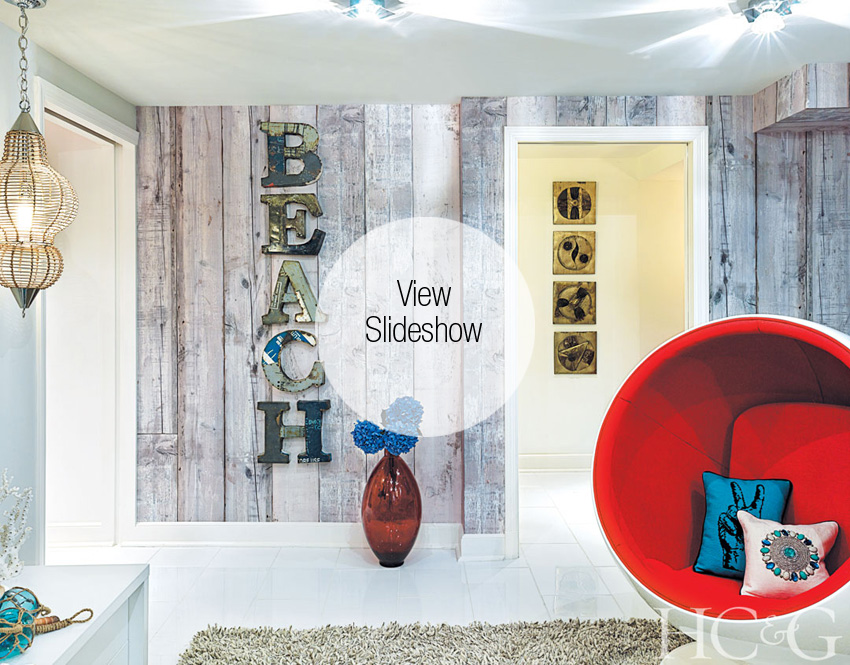 As any home renovation buff or HGTV fan can tell you, working with a contractor is often rife with drama: The hidden fees! The broken promises! The outright lies! But fortunately for designer Kathy Prounis, her contractor’s slights were relatively harmless. He just never called her back.

After 15-plus years of weekending in the Hamptons, Prounis had decided it was time to settle in a permanent home with her family, so she and her husband purchased a traditional Cape Cod in Bridgehampton with the intention of tearing it down. But while waiting for the phone to ring and the sound of her contractor’s voice on the other end of the line, summer was fast approaching. So Prounis did what could be done with the house as it was, at least to get through the season. Much to her surprise, “the place really grew on us,” she recalls. “It’s classic and cute, and I chose to take it back to its 1950s and 1960s roots, while incorporating more modern elements.”

A New York City–based residential decorator with a background in commercial design from Skidmore, Owings & Merrill, Prounis tackled the whole house, replacing the windows, roof, siding, and shutters to refresh the façade without detracting from its charm. The Cape’s exterior is done in black and white, a seemingly straightforward approach, were it not for the attention-getting red front door and its oversize knob. Sculpted spruces dot the perimeter of the house, set in planters painted in the same cheery rouge. The look is so all-American, one almost expects June and Ward Cleaver to appear at the front door, bearing a neighborly smile and a pitcher of lemonade.

The Cleavers’ choice of furnishings, however, would differ markedly. For starters, their patio set might comprise a wrought-iron settee and chairs with comfy floral cushions. But in a sitting area in a corner of her yard, Prounis has opted instead for a Lip sofa by Marilyn Bocca and a pair of Fabio Novembre Nemo chairs in the shape of hollowed–out masks. Not quite the Rockwell-ian look of eras past.

The property is actually made up of several different seating areas, cool spots to “hang with friends,” Prounis says. (For the designer and her family, entertaining is top of mind during the summer months.) Just steps away, a true outdoor living room—replete with gray sofa, chairs, and fire pit—is punctuated with a curvy black-and-white Tord Boontje armchair that’s straight out of Dr. Seuss. “Every corner is fun,” Prounis says of the yard, unusually deep compared with most Hamptons properties, especially for one as close to town as this one. “I wanted people to walk in and have an experience.”

Prounis even gave the garage a new role as an open-air dining room. (Formerly the circa-1930 Bridgehampton Sinclair gas station, it had been relocated here by the house’s former owner.) “Who wants to eat indoors at the beach?” she says. The interior, painted to look like the original structure and sporting a collection of vintage metal gas station signs, houses a long wooden table and chairs in the midst of its exposed beams and woodwork. On the back wall is a round mirror fashioned to look like a gear and hung to reflect a space where the fun happens all summer long.

The good times continue inside the main residence, which pulses with a Brady Bunch–meets–Hollywood Regency vibe. “It’s what a beach house should be,” Prounis says of the exuberant parade of rooms, each brimming with color, whether on a traditional wingback chair or a razzle-dazzle piece of art. In the living room, for example, a bright pink rug anchors a pair of vintage 1950s sofas, a black velvet porter’s chair, a black leather mirror, and a fluffy white pouf. The designer’s intent: to create something completely different from her family’s primary residence in the city, which is astutely tailored to the more sophisticated ways of urban living. “Here, I wanted everything to be easy, and not have the stress of anyone ruining a particular finish. When you’re at the beach, you should feel relaxed and sexy.”

Consider the original dining room—reincarnated in Prounis’s fantasy fun house as a den. It’s covered in a graphic black-and-white wallpaper (“I wanted the plasma TV to blend in,” she says), contrasted with a super-bright yellow shag rug and an equally bright tufted turquoise sofa against a wall. “I started out thinking of white for the sofa, but saw the turquoise at the last minute and just went for it,” she recalls. “Decorating the house ultimately took on a life of its own. It’s happy, and just puts a smile on your face!”

A version of this article appeared in the June 2014 issue of Hamptons Cottages & Gardens with the headline: What Lies Within.