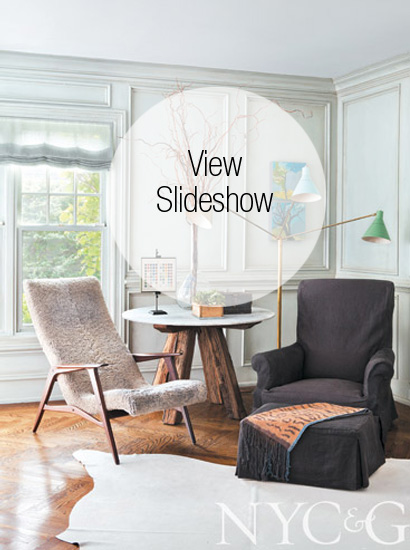 When he was in the fourth grade, Mark Epstein won a drawing and painting competition. The prize: Saturday art classes at Brooklyn’s famed Pratt Institute. The experience was so positive that he returned to Pratt for college as well. “I always knew I wanted to be in the arts,” Epstein recalls, “but as an adult, I realized that I also wanted to pursue a discipline that would give me a strong relationship with people and allow me to share my knowledge and continually explore, learn, and grow.”

So while he ultimately veered away from the visual arts, it wasn’t very far: For nearly four decades, Epstein has quietly built a formidable reputation as a decorator, employing his artistic acuity and deep knowledge of design to his chosen field. (At Pratt he was fortunate enough to study environmental design with the legendary minimalist Joe D’Urso.) His client roster ranges far and wide, though the majority of his customers are based in New York City and in nearby counties. Many of them are repeats, who might have lived in as many as three different Epstein-designed apartments over the years or perhaps had the decorator create design schemes for them in both the city and the country. Epstein has occasionally even inherited the grandchildren of his clients as new clients, once they became adults and put down roots of their own.

The owners of the Sands Point house featured on these pages crossed paths with Epstein through referral, having been dazzled by the decorator’s work on a friend’s home in Southampton. In addition to collaborating with him on this project—a main house and a pool house—over a seven-year period, they also recently retained Epstein to decorate an office in Manhattan.

Located on Long Island’s North Shore, just a 30-minute drive from New York City, Sands Point is a small, quiet community overlooking Long Island Sound. But the clients weren’t necessarily looking for a sleepy little snazz-up. International travelers with a growing, eclectic art collection, they charged Epstein with creating a worldly environment that was also family-friendly (the couple have three children ranging in age from seven to 15) and party-hearty (they frequently power-entertain groups of 20 to 40 people). “They also wanted to incorporate unique, one-of-a-kind pieces,” adds Epstein, so that their home would become the furthest thing from a run-of-the-mill affair. Epstein is a master of combining practical with chic, in this case creating a compelling mix of high and low pieces and even repurposing some furnishings the clients already possessed.

Keeping in mind the couple’s directive to make a space that was amenable to entertaining, he convinced them to purchase an 18th-century Belgian dining table he came across in Los Angeles (he quickly e-mailed a photo of it to the clients, who bought it on the spot), and was also instrumental in having the kitchen island enlarged to facilitate big gatherings. To show off the clients’ art collection, he kept the color palette neutral. “The spectrum goes from pale aqua and seafoam green to linen, grays, and beiges,” he says, “which I punctuated with stronger accent colors and metallics. I didn’t want to compete with the soothing light and the views of the water, which actually become part of the interior design. And besides, I’d never do an all-white house for a young family anyway!”

A version of this article appeared in the April 2015 issue of New York Cottages & Gardens with the headline: Restful Retreat.