An elegant aerie off Park Avenue calls for a familiar touch 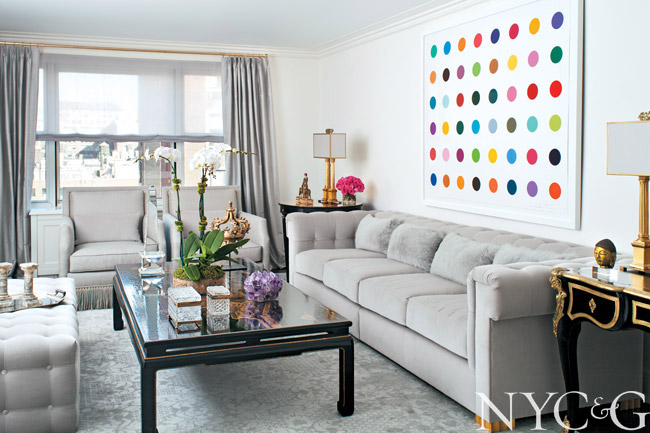 With its expansive avenues and proximity to Central Park, the Upper East Side has a cachet that few other Manhattan neighborhoods can rival—especially for New Yorkers looking for a quiet retreat from the more congested parts of the city.

It’s also a great place to settle down and start a family. Decorator Mark Epstein’s clients did just that—in a duplex off Park Avenue—and stayed for 29 years. But after raising their two daughters and finding themselves newly empty-nested, the couple decided to upgrade to a space with a good deal more panache. Their former apartment, with its mahogany paneling and abundant plaids and needlepoint, had “young family” written all over it; moreover, it lacked the cross-ventilation and light the couple craved. While they considered a move to a sun-filled loft downtown, after realizing it meant leaving the neighborhood they had grown to love, the couple decided to stay on familiar turf. Fortuitously, the opportunity arose to buy a light-filled, 2,100-square-foot co-op within their very own building. The deal was done. 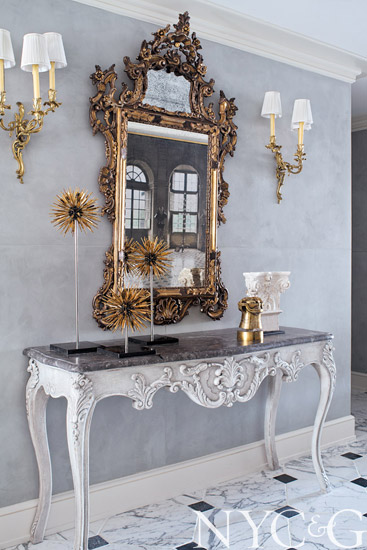 The first order of business: a call to designer Mark Epstein, of Mark Epstein Designs, Inc., who has collaborated on all eight of their city and country residences during the last 37 years. The second: Gut the entire space. Epstein dove right in, creating a striking entry gallery flanked by the living and dining rooms. He wanted taller-than-standard entryways and installed elaborate crown moldings that give the 1960s-era architecture the perception of height. “The critical challenge was to raise the ceilings visually,” recounts Epstein. “It was important to open up the residence, yet create dramatic flourishes while respecting the building’s boxy architecture. The trick is, you can’t make a space something it is not.”

A master of serene, tailored interiors and richly muted palettes, Epstein employed soft grays accented with black, along with pops of metallic golds and silvers for the lighting and accessories. Venetian plaster walls, stone floors with hand-chiseled edges, custom-designed rugs, and vintage wooden herringbone floors lend the not-so-old apartment a timeless European elegance. In the gallery, French gessoed consoles, Italian gilt mirrors, and gilded French sconces add a note of drama, while giving new meaning to the idea of making a grand entrance.

The decorating scheme is a study in contrasts, made more impactful by the addition of contemporary works by such artists as Damien Hirst and Jean-Michel Basquiat. Somehow, Hirst’s trademark colored dots seem just right among the living room’s fur accent pillows and an ebonized Louis XV bronze-doré desk. “I also used couture touches, like embroidering small pearls on the roman shades in the master bedroom as well as adding pencil pleating to the hems,” Epstein remarks. 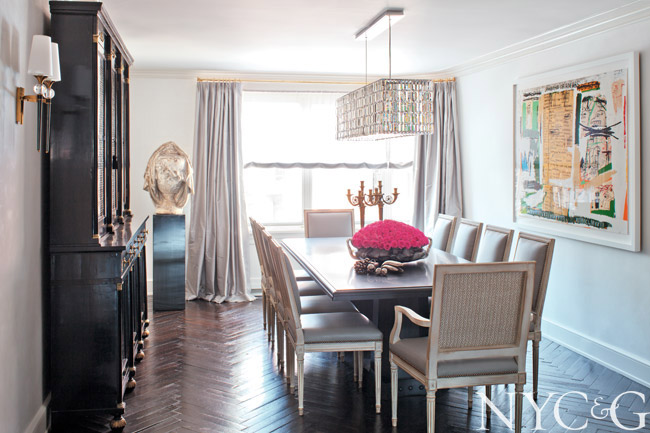 Perhaps the most dazzling space is the dining room, where a handsome French bibliothèque (also ebonized and outfitted with bronze-doré ornamentation) sits aside a Regency-inspired dining table surrounded by Louis XVI–style chairs, a graceful (and daring) choice for a much-used room. “The owners are very glamorous, and so a certain amount of sophistication was required in the design, such as the dining room’s Swarovski chandelier, which complements the living room’s sconces,” says Epstein. But despite all the gloss and polish of their brand-new digs, the designer’s clients haven’t forgotten their plaid and needlepoint roots: Witness the kitchen’s patterned floor, a funky Missoni–meets–Oscar Niemeyer hybrid. Like any fruitful long-term collaboration, their experiments with Epstein over the past four decades prove that change is always good, and there’s always a lot to learn.

A version of this article appeared in the May/June 2014 issue of New York Cottages & Gardens with the headline: Elegant Aerie