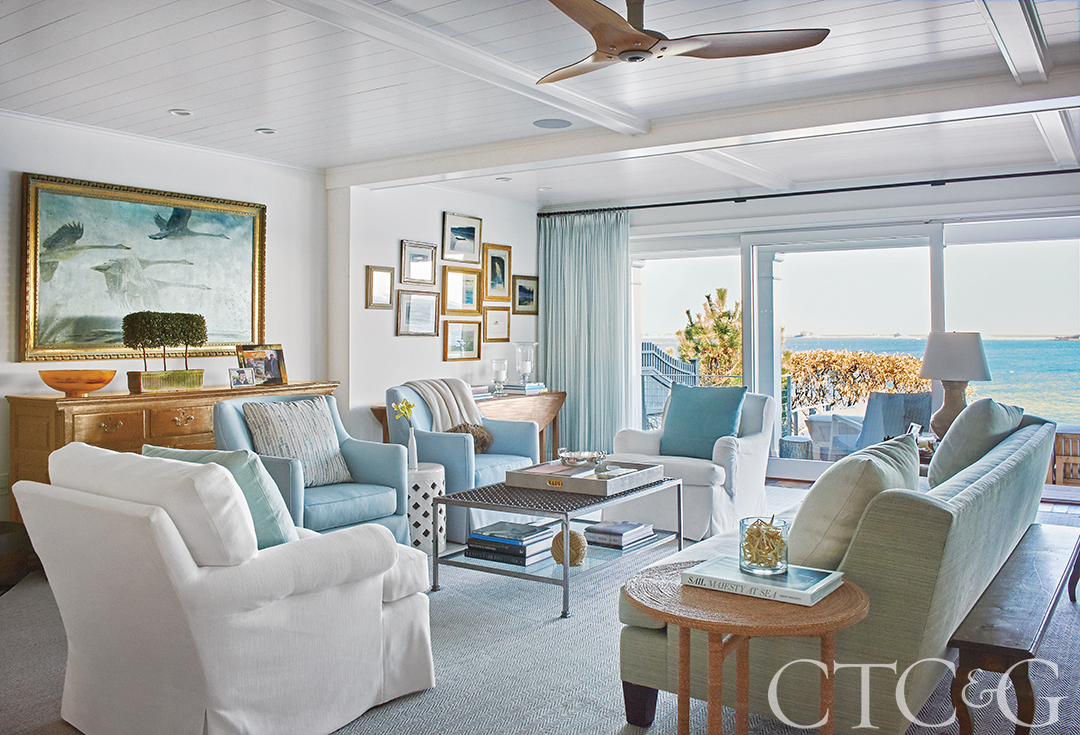 A Jewel box perched above the azure waters of Long Island Sound sounds like the ideal weekend retreat. Now imagine it’s a full-time home. Sunrise to sunset, rain or shine, the house gleams. The client hired her longtime interior designer Michael Cox and architect Richard Swann to transform her beach cottage on quirky, magical Bell Island—connected to Rowayton by a thin isthmus—into a full-time home for her and her three sons. From the outside, the renovated property looks like a traditional cottage. But inside it’s another story. “You approach the house, and it’s humble, snugly set into the environment,” says Cox. “Then you step into the living room, and your breath is taken away by the view.”

“People say that from the outside it looks like a modest house,” echoes Swann. “Yet when you go in, you discover space after space, floor after floor, room after room.” “I come from Ohio, so for me—living on the water—I’m on vacation every day,” says the homeowner. “It’s calming, even when it’s horrible weather. It’s like a constantly changing painting. I have kayaks and paddleboards on the dock so I can get out early.”

Cox had worked with the client previously—on a ski house in Montana and a farmhouse in Ohio—giving him an understanding of her sensibilities and priorities. “Michael knows my style, and he knows what I am looking for,” notes the homeowner. “It’s fun for me to combine family paintings and antiques with glass and metal. He is great at layering. I wanted it clean and uncluttered.” 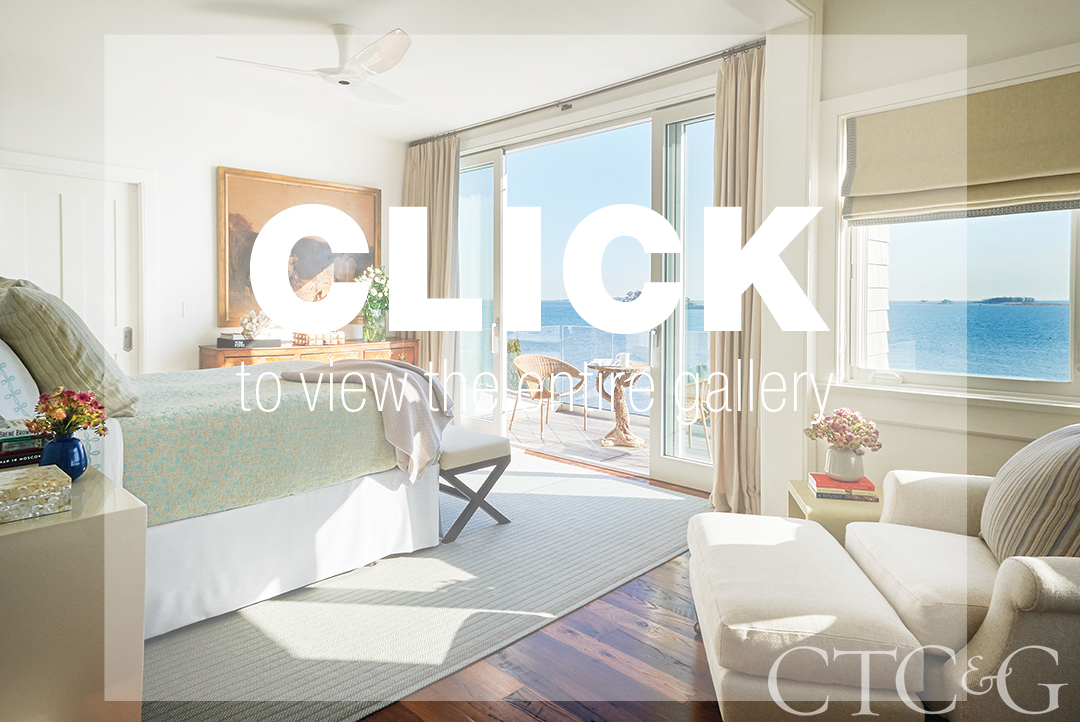 By the time Cox and Swann were done, what began as a renovation was a new house completed in just 14 months. The original footprint filled the maximum zoning allowed, so the only direction to go was up. The roof was raised about five feet, enabling a former crawl-around attic to become a proper third floor with two new bedrooms. The ceiling on the second floor also benefited from elevated ceilings. Almost the entire front of the house was opened with huge glass sliding doors. “We responded to the water views by using those lift and slide glass doors where you can practically open the whole side of the house, giving the client 12 feet of uninterrupted space to wander in and out, creating an inside-outside house,” says Swann.

The enlarged contemporary, open-plan living, dining and kitchen area serves as the focal point of the house. The garage—once a stand-alone wood shack—was woven into the house so you can step from one into the other. A cozy home office/den with built-in bookshelves framing the window was added on top of the garage, linking directly to the house’s second floor.

The design team maximized space wherever they could, using every nook and cranny for built-in storage. The expandable dining table can seat up to 14, while dining room chairs double as desk chairs. A TV pops up out of an antique console in the living room. Coffee tables have two levels, allowing for magazines and books, as well as a place to rest a cup of coffee.

A sea-glass inspired palette fills the great room, while greens and blues delve deeper in the bedrooms. An eclectic mix of family heirlooms, plus vintage and contemporary pieces reflect the client’s sophisticated appreciation of many styles and periods. Soft linens and cottons, natural woven floor coverings, luxurious wools and cashmeres all add to the embrace of the interiors. “Whether I’m coming in from the City or I have been traveling, it’s so wonderful to look forward to going home,” says the homeowner.

A version of this article appeared in the June 2019 issue of CTC&G (Connecticut Cottages & Gardens) with the headline Bell Island Beauty.