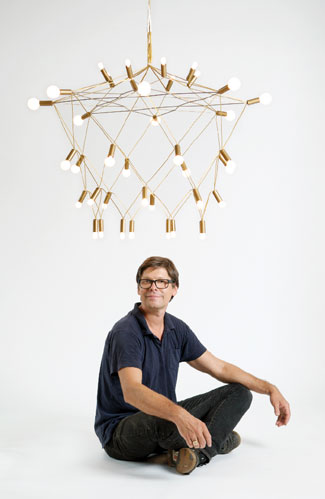 On a sleepy residential street in Long Island City, tucked between tiny row houses and old factories that have been converted into towering glass-faced luxury condos, lies a cavernous workshop where Patrick Townsend makes intricate light fixtures. Ironically enough, the century-old headquarters of Townsend Design was originally a light bulb factory. “I learned this fact several years after I’d set up the studio,” Townsend says. “I like to think it was fate that brought me here.”

Born in Manhattan and raised by his artist parents in the hills of Vermont, Townsend received his degree in industrial design at Pratt Institute. After graduating he worked at a busy design firm that specialized in custom furniture and restaurant interiors, but he soon realized that his true love was making things with his hands. “I grew up in a creative environment,” he says, “and I like to see a project through, from the original sketch to the final result.” 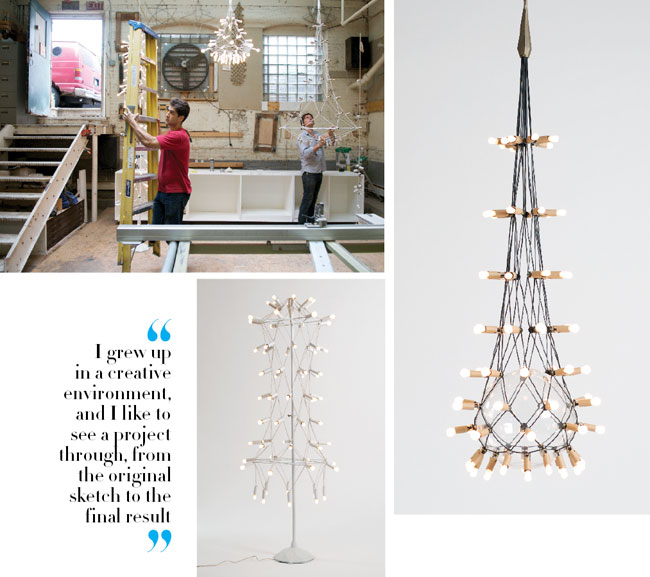 Townsend’s chandeliers and floor lamps are all simple tension and compression structures loosely based on the design of suspension bridges (like that of the Brooklyn or Golden Gate variety). “The tensile element is always the lamp cord with the light fixtures attached,” he says. “The compression part is either the laser-cut metal frame or, in some cases, a hand-blown glass sphere.” On any given day, one can find Townsend and his small team of four sipping iced coffees while painstakingly wiring, weaving, and assembling the powder-coated aluminum confections one bulb at a time.

The first piece in Townsend’s “Superstring” light series, the String Light, was created as a housewarming gift for his then girlfriend, Anna, who is now his wife. “It’s the simplest design in the series,” says Townsend, “almost like the seed.” Now, a decade later, the collection has grown to 11 pieces (his Orbit chandelier is carried in more than 100 stores nationwide, including the Future Perfect and ABC Carpet & Home; the Droplet chandelier is included in the Corning Museum of Glass’s permanent collection). Townsend constantly draws and sketches out new designs in his black Moleskines, but he insists that the creative process is a collaborative effort: “Everyone in the office comes to the table with a wide range of talents and perspectives. We are always sharing ideas and inspirations with each other. It’s absolutely essential.”