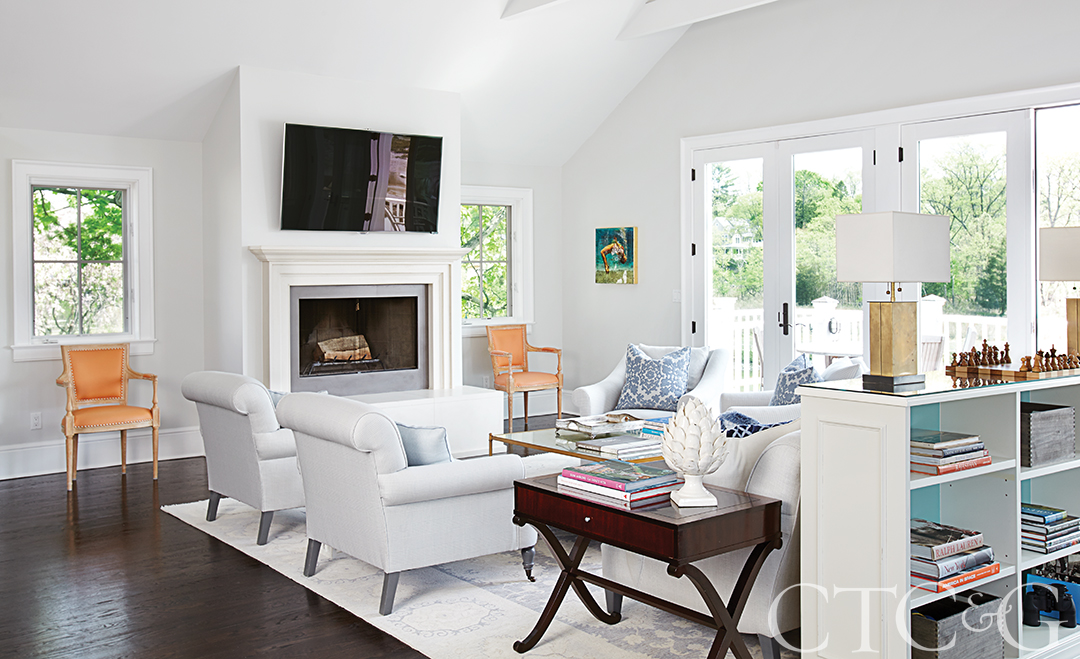 Growing up in the south, Jennifer Croswell always dreamt she’d live at the end of a long, oak-lined drive in a center-hall Colonial with 18-inch crown moldings. Instead, she and her husband, Bobby, bought an upside-down house in Rowayton when it came time to decamp from New York City and start a family. “It is clearly the opposite of a center hall Colonial,” she says. “But we love the casual elegance. We entertain a lot, and the house is on the way to and from the beach, so friends stop in with their kids all the time.” In fact, the party lights in the backyard stay up 24/7. “If we took them down in the morning, we’d have to put them right back up,” she adds.

The shingle-style house was previously owned by friends, who “share the same life values that we do,” explains Croswell. “My goal was to marry some coastal calm with the craziness of having three kids under the age of three.” Set on the edge of Farm Creek, its four bedrooms are on the ground floor; a living room, kitchen, dining room, den and playroom are upstairs. To make it their own, the couple turned to New York City–based designer Peyton Cochran, who had done previous work for them.

The designer took down two small walls upstairs, swapped out the driftwood mantel with one made of poured concrete, added a new countertop to the kitchen island, gutted three bathrooms including the master, replaced several exterior doors, and gave every room—and even the floors downstairs—a coat of bright white paint. “They wanted everything to be clean and bright,” says Cochran. “It took several tries to get the right white. The house is right next to the water and gets a lot of direct sunlight. The natural light changes the tone of the white quickly, and it starts to look yellow.” 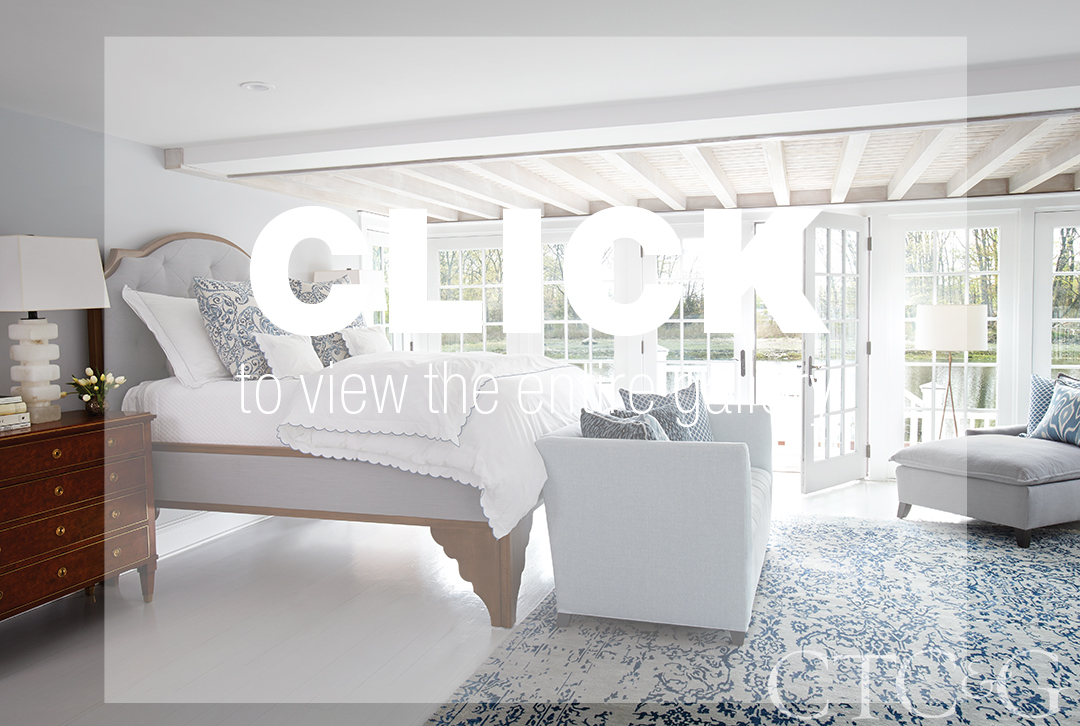 When it came time for furnishings, Cochran used a coastal palette of blues, grays and whites, with grounding influences, such as the dark-stained wooden floors upstairs, and a mix of patterns and textures throughout. “Nothing too crazy,” she notes. The living room has a formal quality to it, but all the furniture is covered with kid-proof fabrics—even the Holland & Sherry fabric on the custom swivel club chairs is treated to be child-friendly. The new mantel in the living room looks like limestone and its raised hearth calls to mind a ’70s-style fireplace with a mesh pull-across screen. “It’s a bit quirky,” says Cochran. “But rather than taking the firebox down to the floor, we wanted a casual element where people could perch.” A pair of faux leather-covered armchairs adds an unexpected pop of orange.

White and blue modular shelving in the dining room was originally built for the couple’s New York City apartment. A work of art Croswell commissioned for her husband after the birth of their first daughter holds pride of place on one wall. “The artist created a collage that incorporates things that are unique to Bobby and me,” she says. “We were married for 10 years before we had children. I like to think it’s ‘Forever Us’ as much as Forever Young.”

It’s a fitting sentiment for a home that has a 16-foot shuffleboard table (a gift from the previous owners) against one wall, a playroom over the garage with a set of monkey bars, and even ride-on toys and bicycles in the living room for rainy days. “Kids need to learn how to play,” says Croswell. “Adults should play more, too. I hope this house encourages that.”

The mood shifts gears slightly in the master bedroom. “She wanted clean, serene and not too feminine,” says Cochran. Alongside a custom walnut and upholstered bed, French doors open onto a terrace that leads down to the dock. “Peyton thought we were crazy when we took out the window treatments, but we love the sunrise and wake up with the sun every day,” says Croswell.

A version of this article appeared in the July/August issue of CTC&G (Connecticut Cottages & Gardens) with the headline: Life in the Upside Down.