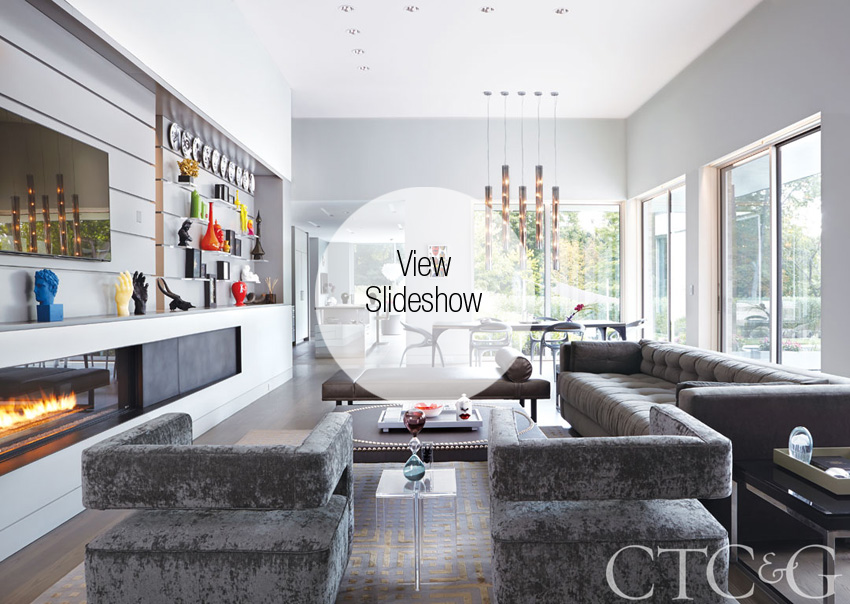 To say that the competition for beautiful homes in Fairfield County is fierce is quite an understatement. Houses run the gamut, from traditional to contemporary and everything in between. The residential eye candy is endless. As an owner of two homes here, designer Rina Pertusi has made a stellar contribution to the visual smorgasbord. Pertusi ran a design firm for 18 years but took a hiatus over the past two to work on her own renovation. She and her husband, Bill, had lived in a center-hall Colonial in Westport for 18 years, but when their kids went to college, they wanted to find a new place to call home. A five-year search for a modernist house took them through every surrounding town.

Just as they were about to give up, Pertusi spied an ad in the paper for a late-1970s contemporary. “We got in the car and drove right over,” she says. “I wasn’t even through the front door when I decided that this was it. I had a list of things that mattered to us: one-floor living, an enormous amount of glass and soaring ceilings. And I wanted to gut it—I didn’t want to come into a house that was so nice that I couldn’t rip it apart.” Often mistaken for midcentury modern, the three-bedroom, three-and-a-half-bathroom, 5,000-square-foot house, dating from 1979, is done in the International Style.

Being an admitted perfectionist, Pertusi started from scratch. She kept the open floor plan of the main living spaces intact and transformed the lower level into a gym and art studio. Pertusi turned to architects Mark Rolfs and Rudi Elert of the Port Chester–based Rolfs Elert to work on transforming the patio into a breezeway/mudroom. And the project kept growing. “Before long, we were gutting it,” says Elert. Although the spaces were well-delineated, he describes what they set to work on as goofy, and the décor as almost bizarre. “The previous owner used this aged Colonial style. It was suffering an identity crisis,” he says. “The front door was green, and it had a bad roof.”

Pertusi wanted to reinstall the very clean lines that dominated most of the architecture. “Almost every decision made was in that regard,” says the self-taught designer. The challenges included some oddities, like the absence of normal windows. “We had to replace every one,” she says. Each was nine feet high, which motivated Pertusi to keep the visual line the same throughout each room. The stone fireplace was revamped into a six-foot-long, steel and glass focal point, one of Pertusi’s “dream objects.” The band of gray wall surrounding it bears slats holding Lucite shelves, used to display her many collections—such as original Fornasetti collected over 25 years.

Pertusi collaborated with Bilotta Kitchens on the kitchen and the bathrooms. “Rina had so many great ideas,” says senior designer Randy O’Kane. “One was adding a 12-foot-long kitchen island.” For a seamless look, O’Kane utilized Neolith in a wood-grain pattern. And when the two women visited the marble yard to hunt for the right material for the back wall of the powder room, Pertusi leapt at a Calacatta Cielo marble, deciding to apply it in one piece from floor to ceiling.

Despite the house being what Pertusi jokes is “truly 50 shades of gray,” the palette has colorful interjections, as in the vestibule, covered in a multi-hued triangle-patterned wallcovering from Cole & Sons, matched only by the nine images of water that grace the main gallery, work by a Spanish photographer Pertusi found on Flickr. “Rina is incredibly resourceful and has a real curatorial sensibility,” says Elert. “She likes to experiment, something you don’t often come across. It’s rare to have a client as involved as she is.”

A version of this article appeared in the March 2016 issue of CTC&G (Connecticut Cottages & Gardens) with the headline: Singular Sensation.