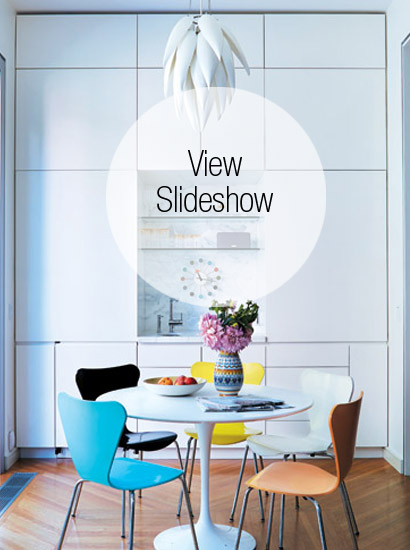 It’s said that word of mouth is the best advertising for any business—whether you’re looking for an attorney or a designer. But for decorator Robert Couturier and his lawyer, David Berger, referrals weren’t even necessary when it came to doing business together. Berger had been looking to upgrade the decor in his four-story Cobble Hill townhouse, so he knew exactly the man to call. “David has been my attorney for a long time, and we are quite close,” says Couturier. “The entire design process was a wonderful experience."

Like many of Brooklyn’s neighborhoods, Cobble Hill has evolved over the past several decades from charming to a little tattered to charming again, bustling with the energy of residents both new and well established, including Berger and his wife, who moved here long before the recent wave of hipsters did and have raised their two children in the home. So when the two men decided to work together on the project, it was easy to come to terms on the desired end result. "When David explained what he wanted, he didn’t have to make me understand,” says the designer. "There’s no pretense with him. He didn’t impose anything on me, and I didn’t try to convince him or his wife to like anything I put forth. My biggest mission was to translate their desires.”It was virtually impossible for Couturier not to fulfill his end of the deal.

The native Parisian with the utterly fashionable last name got his start studying the decorative arts at the City of Light’s legendary École Camondo. “It was an incredibly good education,” says the designer, who landed in New York in the late 1970s and worked for Adam Tihany before launching his own company in 1986. During the past 35 years he has built a formidable, multifaceted portfolio of design projects, including a country home in Hampshire, a penthouse apartment in Atlanta, a flat in Gstaad, and a winter house in Vero Beach—each one different from the next, but all embodying his trademark luxurious, yet unpretentious, aesthetic. Couturier’s career really took off when he was just 32, after the British billionaire Sir James Goldsmith asked him to design La Loma, the tycoon’s estate on 25,000 acres in Cuixmala, Mexico. “I was a very young man,” recalls the decorator, describing the palatial home that took 2,000 workers to complete over several years. “I had no idea of the magnitude of the job.”

While the Bergers’ townhouse is far less grand, Couturier approached the project with the same care and attention to detail that he applies to any commission. Though decorating is always top of mind, the designer says he’s “more interested in the architecture of a place than anything else.” The Cobble Hill house dates from the 1860s and features a bevy of “beautiful old spaces,” but in order to meet his clients’ directive of creating airier rooms and letting in more light, he took many of the walls down to the studs, including those in the kitchen, where he installed bright white lacquer cabinetry from floor to ceiling. An inset marble server featuring a George Nelson clock, a Jeremy Cole Aloe Bud light fixture, and Arne Jacobsen Ant chairs make the space look like anything but a period piece.

In virtually every corner of the home, Couturier has created tantalizing juxtapositions, such as pairs of Vladimir Kagan lounge chairs and Arne Jacobsen Egg chairs framed by silk curtains in the living room—all in varying shades of orange, offsetting a traditional tapestry rug underneath. Berger had inherited several pieces of furniture from his father, an Austrian immigrant, which Couturier retained, along with the home’s glamorous fireplace mantels. “I’m all about equal opportunity!” the designer jokes.

Overall, the project took eight months to finish—a relatively short time for the amount of renovations that were made. But Couturier insists that the challenges were few. “When you like people, you tend to differ less with them and accept their tastes a little more easily. We kept things as clean and simple as possible.”

A version of this article appeared in the December 2014 issue of New York & Gardens with the headline: The Client.