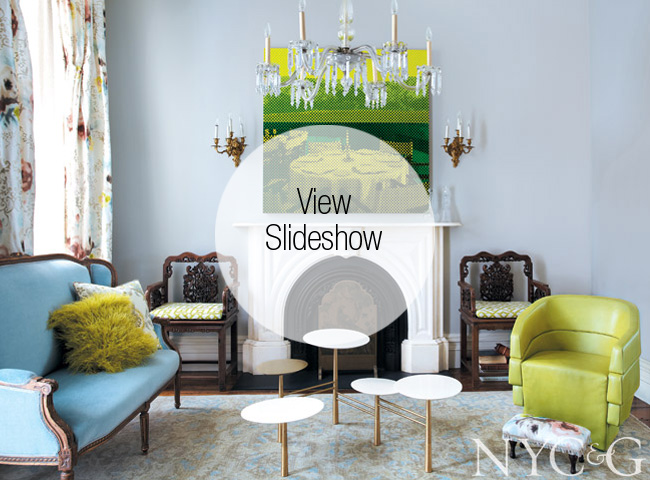 The frenzied pace of development in New York City’s hottest borough has made untouched Brooklyn brownstones scarce. In 2010, Benjamin and Jennifer Whitfield, émigrés from Manhattan, found just such a house in Carroll Gardens, a neighborhood of deep front yards, fresh mozzarella, and over-the-top Christmas lights.

The five-story building, owned by the same family for a century, was “in the worst condition possible,” says Ben, an energy-industry executive. With Brooklyn-based CWB Architects, a go-to firm for high-end townhouse renovations, the couple embarked on a two-year project to convert the structure, which had been carved into apartments, back to a single-family dwelling for themselves and their two young sons. “It was a complete gut job,” Ben adds. “We took it down to the studs, and then we had to replace the studs. All that remains of the original building are the façade and the two party walls.”

By removing the rear half of the parlor floor and replacing much of the back wall with windows, they gained a light-flooded garden-level living space with a 24-foot ceiling. A playroom, family dining area, and kitchen with walnut cabinetry and thick Calacatta gold marble countertops share the lower level. Above, on the original parlor floor, there’s a small formal living room and an open dining room on the newly created mezzanine. Bedrooms and a home office occupy the third and fourth floors, including a glamorous dressing room and sitting area within the master suite, while at the very top of the house, there’s a media room under the eaves, featuring a wet bar, a walk-in steam shower, and a roof deck with an expansive harbor view.

While the walls were coming down, Tamara Eaton, a Manhattan-based interior designer, entered the picture. The Whitfields wanted the decor to be “sophisticated and refined, but still young and fun and casual,” Eaton recalls. “They are not a silk sofa family, and I am not a silk sofa decorator.”

“We didn’t want it to be too staid,” confirms Ben. No worries there. The creative tone is set as soon as one walks up the stoop and encounters a playful spin on the Victorian front parlor. Billowy floor-length drapes, a vintage settee upholstered in a pale blue mohair/silk blend, antique Chinese chairs, and a crystal chandelier original to the house share space with a modern yellow leather club chair from Moroso that looks, in Ben’s words, “like a funky spaceship landed here.” Above the marble mantel hangs a boldly hued painting by contemporary artist Wayne Gonzales, instantly identifiable as an artifact of the digital age.

“We played the game of old and new, giving older forms a modern twist,” Eaton says, citing a classic claw-foot tub painted an unexpected pink. “People who buy brownstones want history acknowledged.” Fortuitously, some original interior elements were salvageable, including a pair of arched mahogany doors, elaborate hall and pier mirrors, turned stair balusters, and coveted but battered wide-plank pine flooring, which was remilled and relaid on the two lower floors. All other woodwork is new, including deep crown moldings and new oak risers and treads on the sinuous staircase, unconventionally carpeted in purple sisal.

The fabled Brimfield, Massachusetts, flea market proved a boon to the homeowners and their designer, who went shopping together at the annual May extravaganza, waking at five o’clock three days in a row. “I brought floor plans and a vague list,” Eaton says. “We had fun finding quirky things, but we were careful not to buy just for the thrill of it. It’s easy to spend $100 here, $100 there, and end up with a lot of stuff you don’t have a place for.”

Among the unique items they came away with: a spooled Portuguese Gothic headboard for the master bedroom and a 19th-century octagonal cabinet, originally used for holding carriage bolts, that serves as a storage piece in the informal dining area. “There’s more than one approach to decorating,” Eaton says. “If you’re focused on hunting for that perfect item, opportunity might pass you by.”

A version of this article appeared in the April 2015 issue of New York Cottages & Gardens with the headline: Pioneering Spirit.