Barbara Wells of Prudential CT Greenwich was looking to transform a space into a yoga studio large enough to have classes with her friends, but little did she know a one room redesign would evolve into a serene and successful renovation. 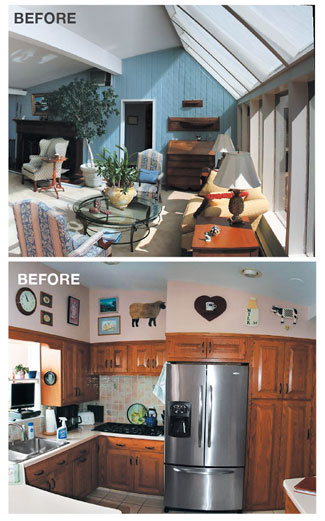 It all started with a yoga studio.
“The homeowner was interested in freshening her home through new furnishings,” says Tracy Schneider of Tracy Schneider Design. “And she wanted to convert a space that her late husband had used to house a train collection into a yoga studio large enough to have classes with her yoga teacher and her friends.” Referred to Schneider by Barbara Wells of Prudential CT Greenwich, the homeowner got that and a lot more.

Natural light and existing wood detailing brought serenity to the yoga studio, where carpeting was removed and wood flooring installed. “But the walls were painted a forest green,” says Schneider. “After my client showed me a pastel drawing she uses to keep her focus while doing yoga, I knew I needed to match the undertone of the trees, which is a springtime sage. We added a glaze on one wall for wall-specific exercises, which can leave marks on a standard painted wall.”

While working on the studio, “whenever I went to the home, I noticed that the layout needed work,” says Schneider. “The living room had too many sitting areas, and the kitchen felt closed in.” Plus, just inside the front door, an L-shaped wall and sliders made the foyer seem dark and dated. “I showed her some sketches that would help improve the spirit and value of the house, creating a nice visual as soon as one entered.” By replacing the sliders with windows, adding prefinished wood floors over the existing terracotta tile, the foyer instantly became lighter, brighter and more welcoming.

Faced with a narrow span of space in the kitchen, Schneider moved the walls back and added a steel support column. A wall with a reach-through was replaced with a breakfast bar, which opened the views from the kitchen out to the yard.

Another challenge involved relocating the dining room from the other side of the house. By using a millwork half-wall to divide the living room, the designer created a centrally located dining room, while simultaneously resolving those confusing sitting areas. “I designed the millwork to divide the two spaces, but also to allow the natural light to flow through from the dining room windows and skylights to the living room,” says Schneider. “We also removed large cherry cabinets from the living room—they were fighting for attention with the fireplace—to other locations in the home.” Built-ins compensate for the lost storage space.

What started as a one-room redesign and decorating project evolved into a successful renovation. “I loved opening up the space and making it more light and airy. Now it all makes architectural sense,” notes Schneider. “By focusing on the details, we really made it sing.”