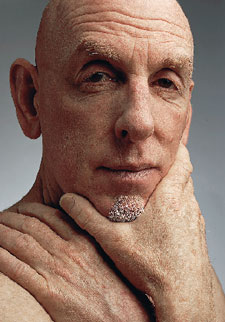 You’re a lighting sculptor, yet you studied film and photography and started out as a performance artist. How do you explain that evolution? After college, I was making a film about Berlin dance company Group Motion, and I joined them. One of the other dancers was a ceramic artist, and I started working in his studio making ceramic objects—and combining light with the objects to illuminate them from within. That was the beginning of my experimentation with light. I was able to take my experience with performance and dance and integrate it into the world of objects. When you were selling pieces out of SoHo craft galleries and your own workshop/gallery on the Lower East Side, how did a walk through Chinatown transform your work? I saw a window filled with teapots. At that time, I was also working in teapots. So I went into the store and bought about two dozen and had them sent to my studio. That was the transition point when I started collecting rather than fabricating things. I realized that I appreciated assembling more than making the objects themselves. Where do you get the pieces? A big part of my process is collecting. Even though it looks random, I’m very selective, very particular. Some days I just go out and collect. In the winter, when the flea markets are closed, I go to a junkyard—my friend has a demolition company with all kinds of crushed metal things. I recently found musical instruments that were discarded from the Philadelphia school system, hundreds of them. What are your criteria for picking objects? There has to be something about them that speaks to me. I trust my instincts. They are all found materials. How do you go about starting a piece? If it’s a commission, people will bring me things. On my own, I will start making a pile of objects and then start assembling a structure, attaching things to one another. There is one object strong enough to be the central point, to hold everything together—it’s like the core. Why restrict yourself to light fixtures? I’m interested in light; it creates space. And a sculpture is sort of self-illuminated. In a way it describes what I do: I bring ordinary objects into an assemblage and then incorporate light so that it breathes new life into old things—infusing light into the ordinary. With light, I rediscover and revive things that have been forgotten or thrown away, and that is a metaphor for life. Why name your company bahdeebahdu? I chose the name because of the rhythm. It’s fun to say—a nonsense word that sounds good. Who would be your dream client? The kinetic artist Jean Tinguely. I like his work, his ability to deal with chaos.