Designers Give Their Insight on Decorating Kids’ Rooms

How to style a youthful yet sophisticated space. 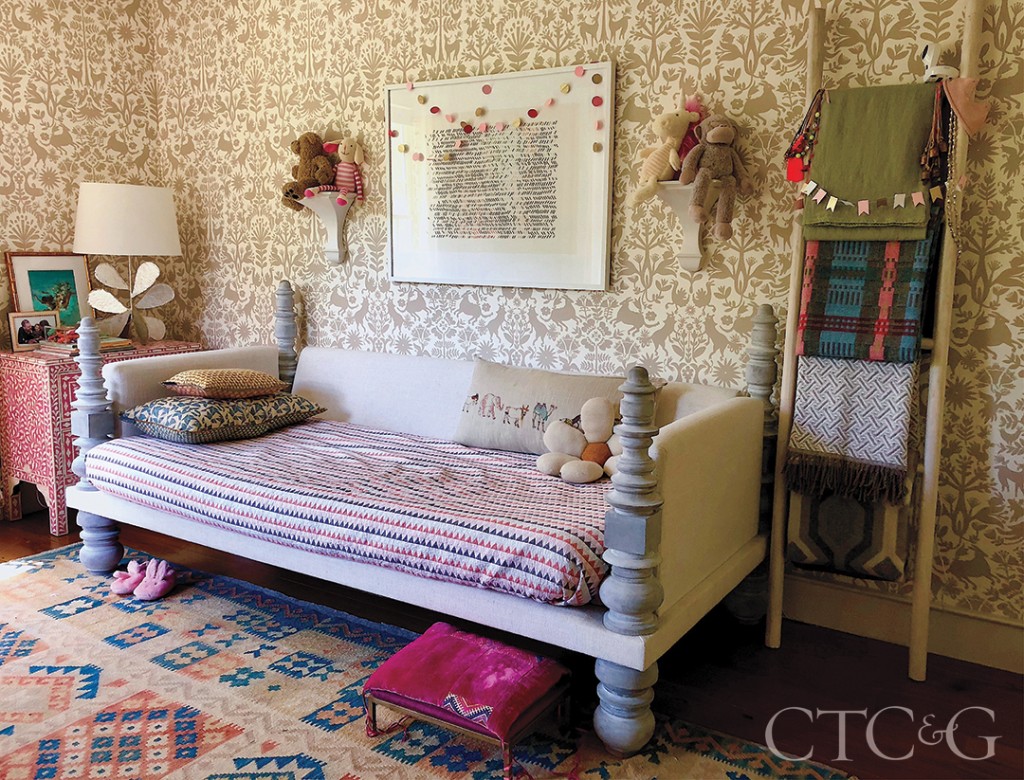 A daybed serves as invaluable seating in a nursery, with the intention that a young child can grow into it and use it as a bed with a soft back to lean against once the crib has been outgrown. The ladder with blankets is a functional way to add more dimension and texture to the room. – Debbie Propst, Herman Miller Retail 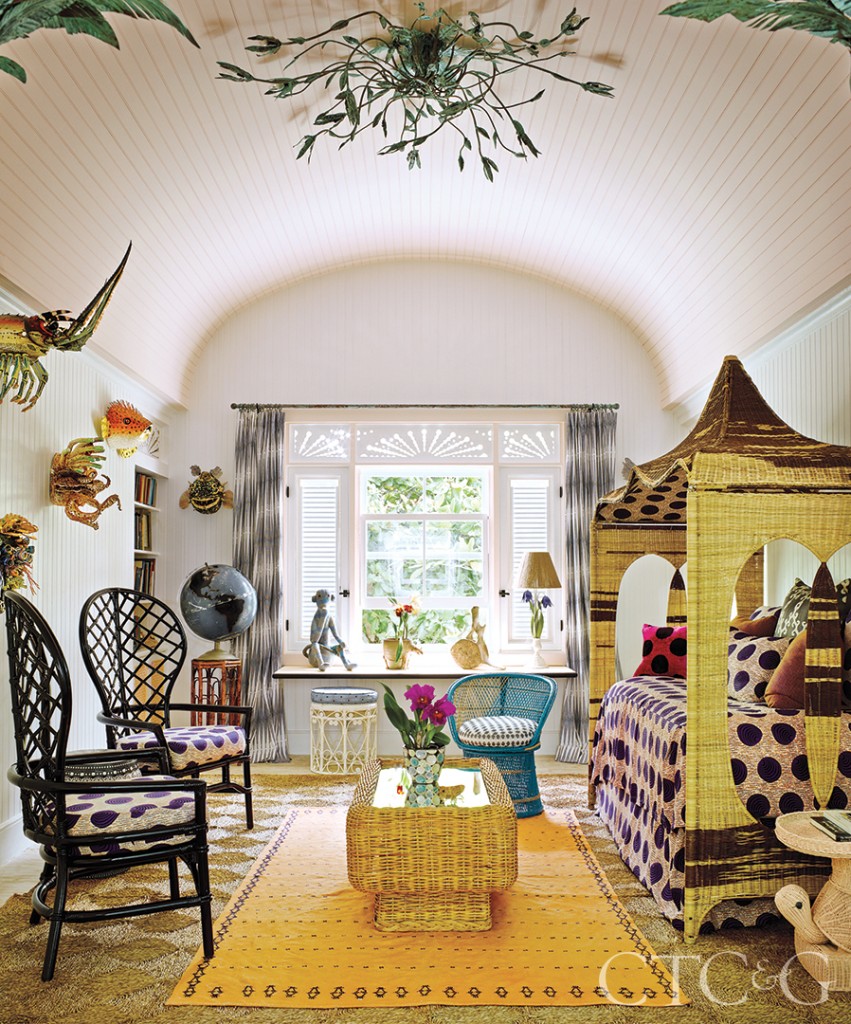 In her Dominican Republic retreat, designer Celerie Kemble conjures up a family playroom (complete with extra bedding) that feels equal parts fantasy and familial. The papier-mâché masks on the walls are by local teenagers, many of whom were winners in the annual Carnival mask contest held in Río San Juan. “They set the tone,” says Kemble. “I wanted fanciful without feeling babyish.” The wicker bed, chairs, coffee table, and turtle table were found though various flea markets and vintage vendors and then shipped to the island. Kemble designed the ceiling light. “Wacky never dates itself,” she says. – Celerie Kemble, Kemble Interiors, Inc 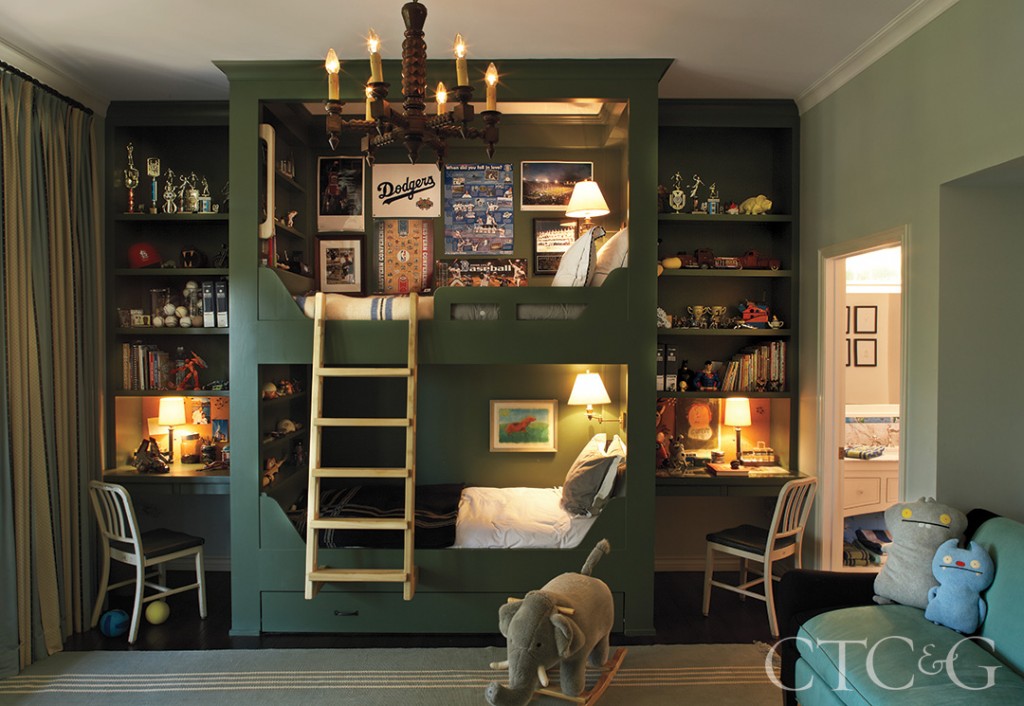 Providing separate work and sleep spaces for two children, ages six and ten, was as important as maximizing a play space that could last beyond their early childhood years. Case in point: The sofa now occupies the space that held the former changing table. “We prioritize adaptability— especially in family homes,” says its architect, Tim Barber, who created the space with designer Kristen Panitch. – Tim Barber, Principal Architect, Tim Barber, LTD and Kristen Panitch Interiors 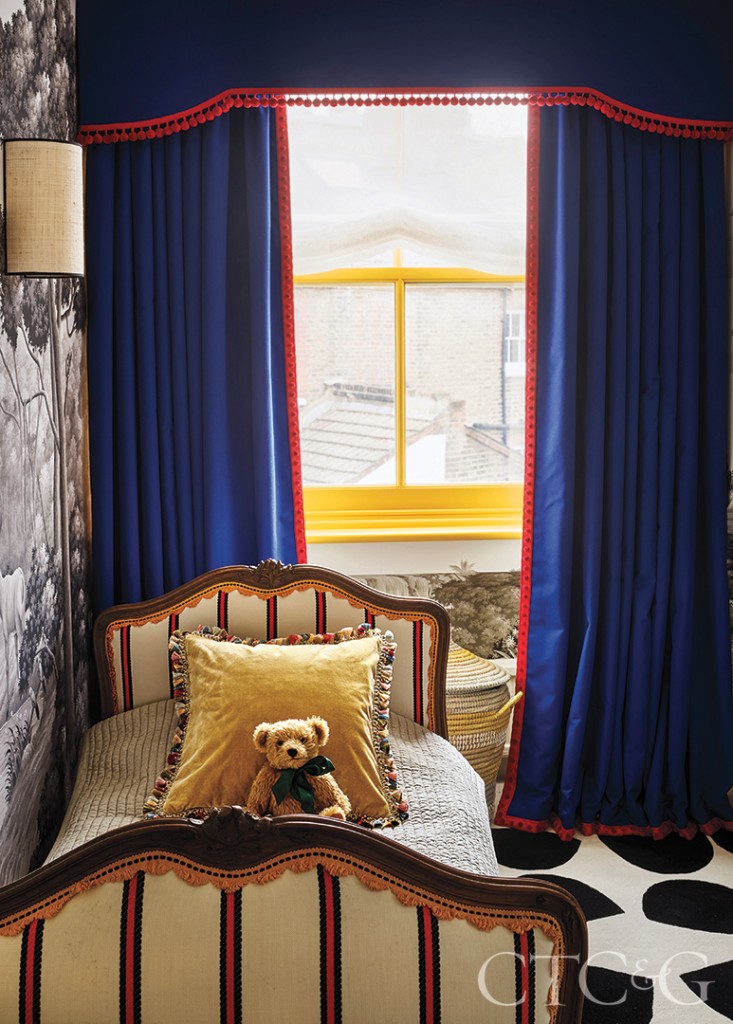 “My priority for this room was to engage the imagination and to inspire—much as I was as a child by the wallpapers with which my father filled our home,” says Hannah Cecil Gurney of her three-year-old’s London bedroom with its play area. “The hand-painted de Gournay wallpaper depicts the sprawling grasslands of the African savannah, filled with animals rendered in a striking monochrome palette, which I love for its non gender-specific theme, so the room can be shared or reinhabited easily.” 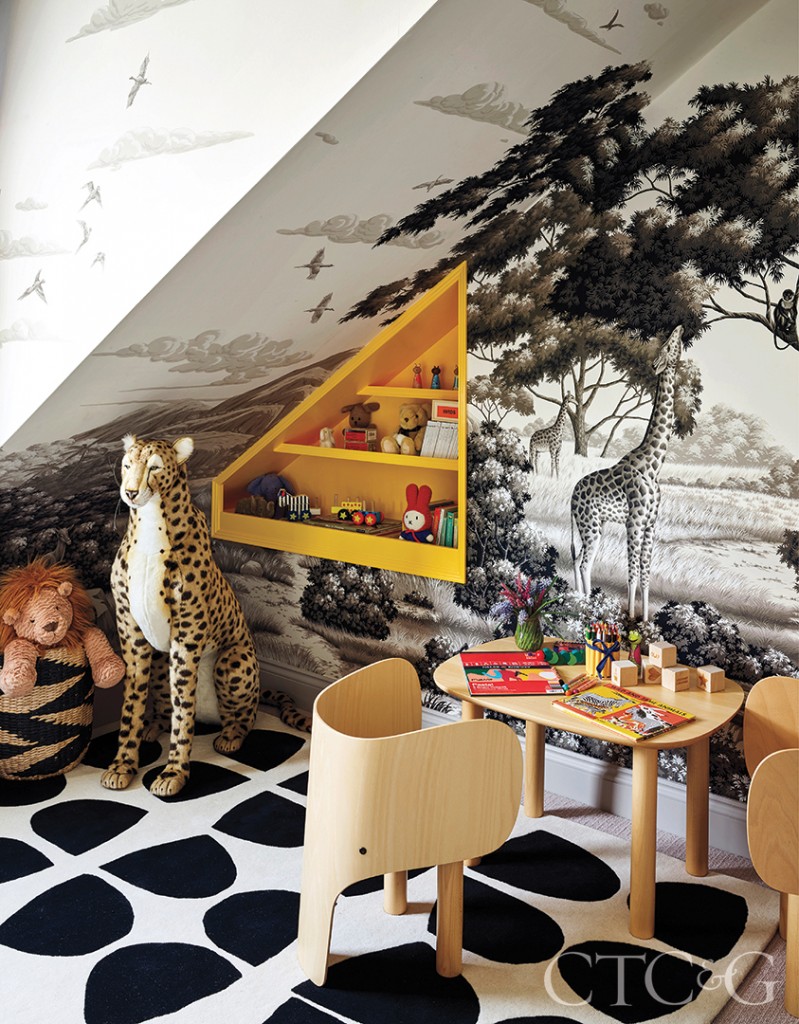 Cecil Gurney offset this palette with very specific accents of bold primary colors, from the vibrant yellow for the custom-built shelving to the deep blue of the curtains trimmed in a rich red. The eighteenth-century bed frame was resized to a child’s proportions by Cecil Gurney and upholstered in Dedar’s Young and Lovely in Rouge Marinière. – Hannah Cecil Gurney 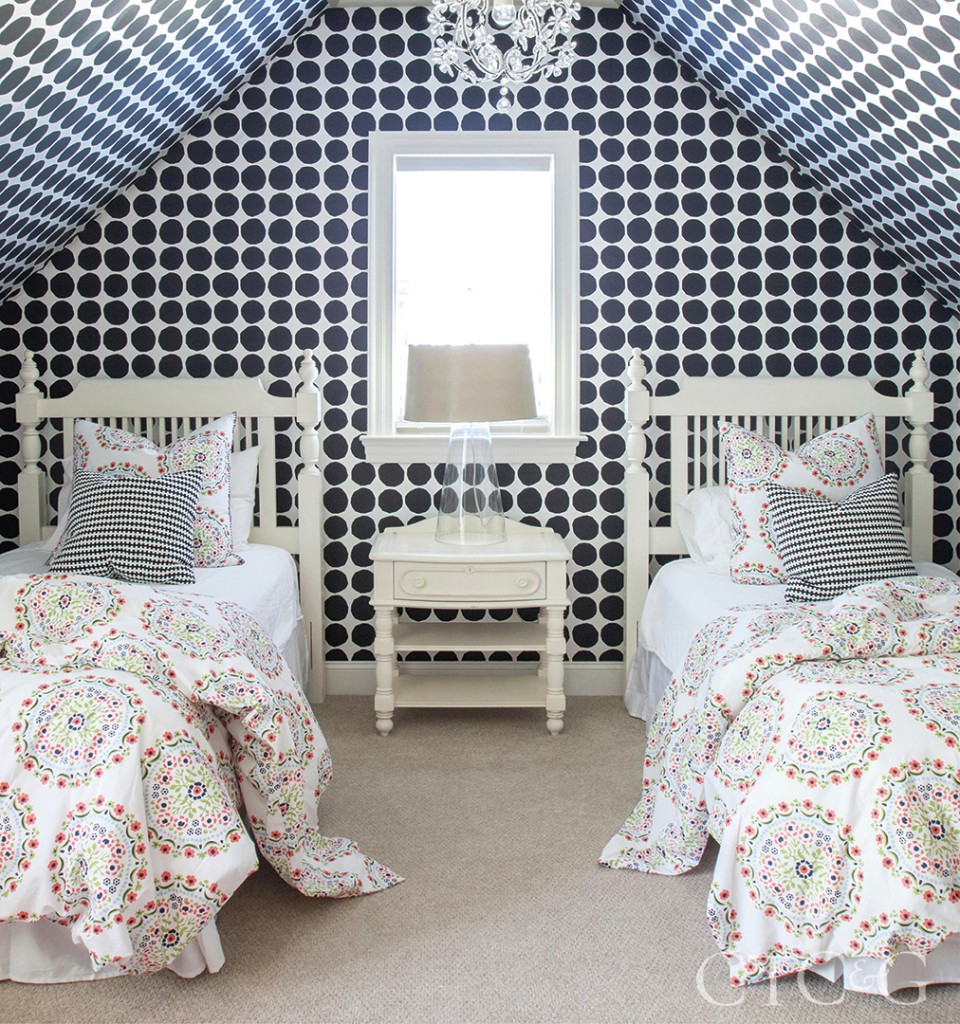 This is the room of a seven-year-old girl who loves to host sleepovers. “I wanted her BFF to have a matching twin for when she came over,” says designer Lisa Sherry, “and the rest of the room is sleeping bag ready!” Wallcovering and top of bed from John Robshaw. – Lisa Sherry of Lisa Sherry Interieurs 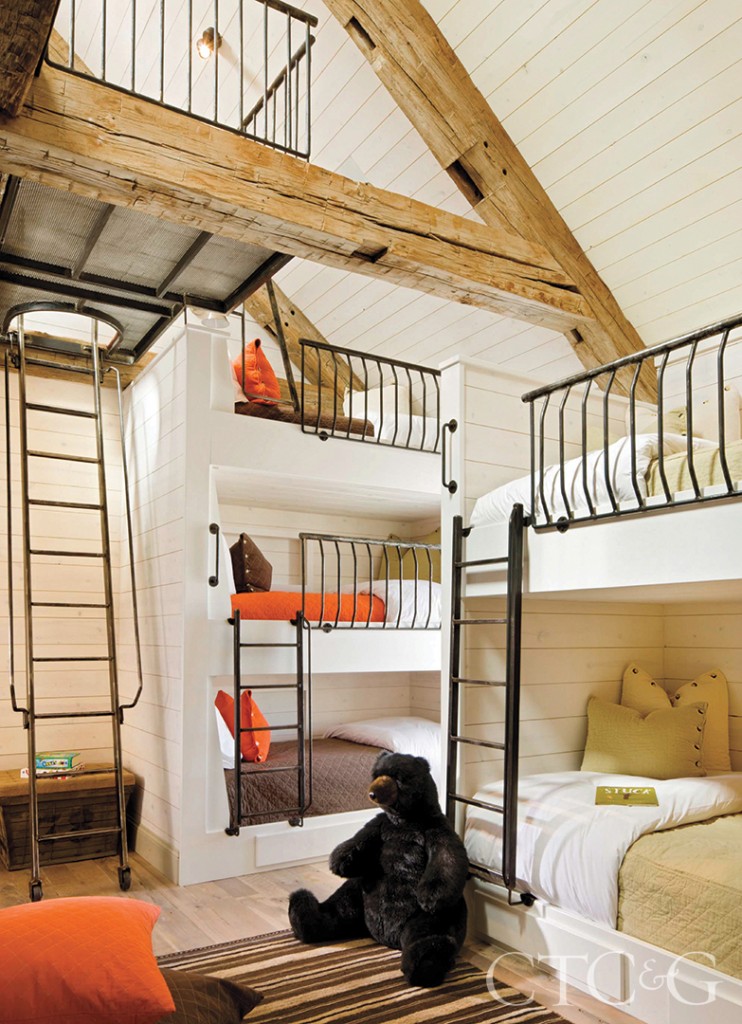 BUNK BEDS FOR EVERYONE

“This room in Crested Butte, Colorado, was created to accommodate kids of all ages, so we used queen, full, and twin beds to maximize sleeping areas in the space of a historic building,” says Florida-based designer Jett Thompson, who made sure to install charging stations and reading lights into each nook. “For those brave enough to scale the ladder, the top is like a secret fort with a Lego playroom and beanbag chairs.” – Jett Thompson Home

The print version of this article appears with the headline: Dream Rooms for Children.
Subscribe to C&G