Discover peaceful Enders Island off of the coast of Mystic

This little-known gem boasts serene waterfront gardens alongside heavenly views of the Sound. All are welcome to visit this 11-acre island, which is home to the Society of St. Edmund, an order of Catholic priests and brothers.

Thomas B. Enders, a physician and scientist, became disillusioned with life in Hartford. He divorced, remarried and bought an island in Fisher’s Island Sound, at the mouth of the Mystic River. Known at the time as Barker’s Island, it was a simple place. But Tom’s new wife, Alys VanGilder Enders, wanted something fancier than a farmhouse, and so the building began. 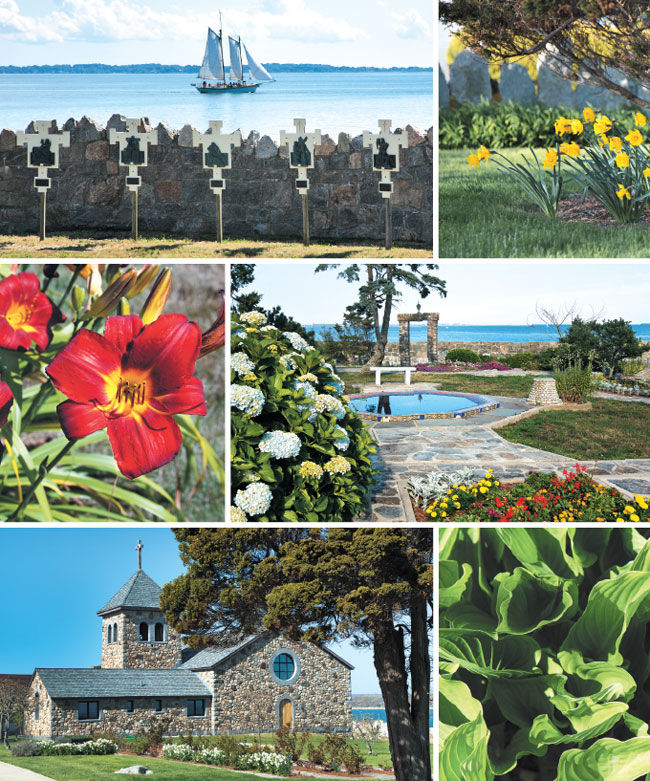 As one grandniece put it, “Uncle Tom was enamored with tile, and Alys liked concrete.” Inside the impressive Arts and Crafts-style house at the center of the island, the ceiling, walls and floors are covered in tile, most of it, the niece remembers, specially ordered and shipped from Italy. Tile can be found on the outside, too, on balconies, tables and lining a reflecting pool.

It’s a straight shot from the causeway down the center of Enders Island. At every edge of this potato-shaped plot, Tom had “dinosaur walls” (high seawalls with distinctive stegosaurus-like profiles) built to stand guard against the storms. The vegetable garden, a grape arbor and fruit trees are remnants of those early days; he also kept a cow and a horse. Tom’s scientific laboratory is now repurposed as a wine cellar. 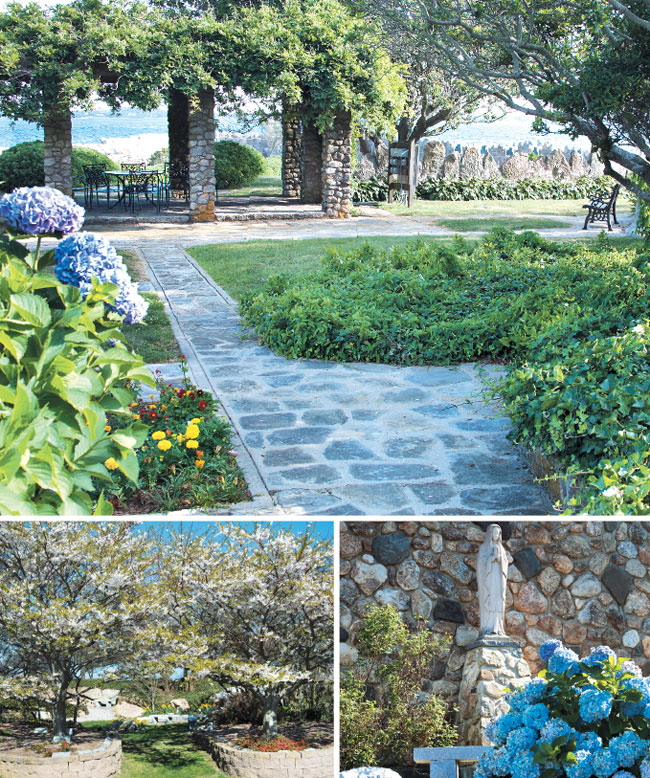 Today, the 11-acre island is home to the Society of St. Edmund, an order of Catholic priests and brothers. The order runs a variety of recovery programs and interfaith retreats for women, families and married couples. The St. Michael Institute of Sacred Art is a school on the grounds, where students come for intensive training in stained glass, Gregorian chant, manuscript illumination, iconography, calligraphy and mosaics.

“Aunt Alys had a passion for the garden,” notes her grandniece. She recalls that Alys built the concrete pathways and “got a quarry to drop boulders all over the lawn.” The transition from the built to the natural is seamless, with concrete creating graceful bridging seams between boulders and steps, and holding small, round stone embellishments in place. There are garden beds shaped like a crescent moon, a horseshoe and two large hearts. Dinosaur walls back flowerbeds and line up to link the lampposts. In their heyday, the walls were painted black.

Tom died in the 1940s. And, not long before her death in 1954, Alys decided to give Enders Island to the church. Alys was not particularly religious, but her relatives were not interested in the property. Gradually her plantings disappeared, but the concrete and boulder “bones” remained. 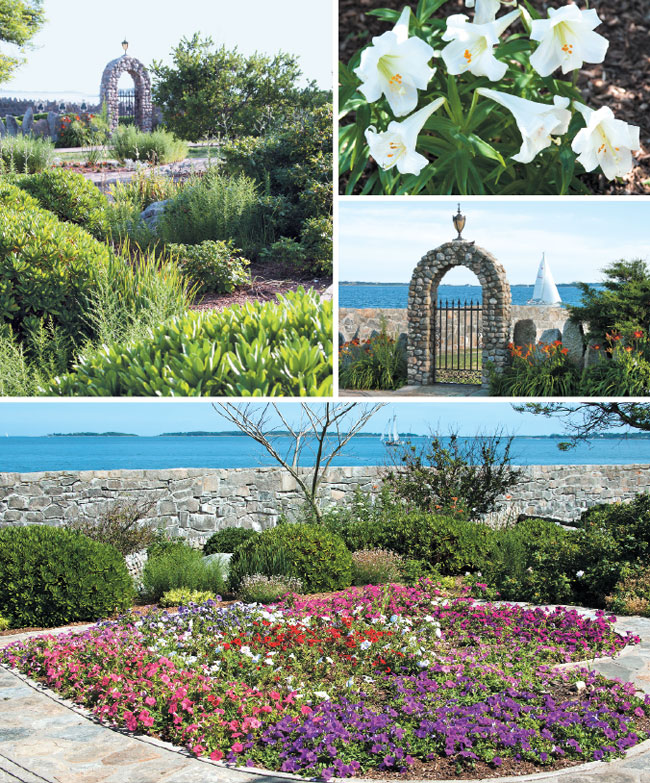 For the past 14 years, St. Edmund’s director of facilities, David Santos, has been coaxing things back to life in the garden. Santos comes up with the patterns, generally favoring themes of red, white and blue, which play well with the many hydrangeas on the property. He does his work with donated plants, two helpers and a crew of volunteers. Each fall, using the center’s kitchen, Santos turns the island’s fruits into preserves, which are all sold in the shop. Among these are Roo-Berry: strawberry and rhubarb preserves; Enders Blue: a blueberry preserve; and Smelly Jelly: a garlic-onion glaze.

There was considerable damage to the causeway and seawalls last winter, and a number of trees and bushes were lost. “It’s always windier on the island,” says Santos, “and always somewhat colder than on the mainland.” But such adversities serve only to remind us of the value of such sanctuaries. As it says on the website (endersisland.com): “God’s love and goodness hangs lightly in the air on this island.” Enders Island is open to the public: All are welcome.