Distilleries are Bubbling Up In and Around New York City

Since Governor Andrew Cuomo's two year reign in office, the number of micro-distilleries in New York has increased more than 200 percent, with 12 of New York's 28 brand-new distilleries based in Brooklyn alone.

According to a recent “alcohol summit” held at Governor Andrew Cuomo’s mansion, alcohol production is now one of New York’s biggest growth industries. Cuomo’s administration has streamlined the process for obtaining a farm distillery license, making it easier for independent distillers to produce and distribute small-batch spirits made from locally grown grains and fruit. During Cuomo’s two years in office the number of micro-distilleries in the state has increased more than 200 percent, with 12 of New York’s 28 brand-new distilleries based in Brooklyn alone (although the numbers are well below the 1,000 or so during the Prohibition era). They join the nearly 400 distilleries nationwide, up from just 30 in 2005. Clearly, there must be something in the water, as these three regional companies demonstrate.

Lay of the land: With 100 acres of heirloom barley and rye, Hillrock bills itself as the Hudson Valley’s first “field-to-glass craft distillery.” Owner Jeffrey Baker recruited master distiller Dave Pickerell from Kentucky (above, from left, with head of operations Tim Welly) to make its whiskey on the premises, which feature a malt house (right), granary, and 250-gallon copper pot still.

What’s brewing: The world’s first “Solera aged” bourbon, made from a process traditionally used to make Sherry, in which a percentage of whiskey is removed from the oldest barrels and added to the newest. Aged in Oloroso Sherry casks, it has notes of molasses, dried fruit, vanilla, and clove. 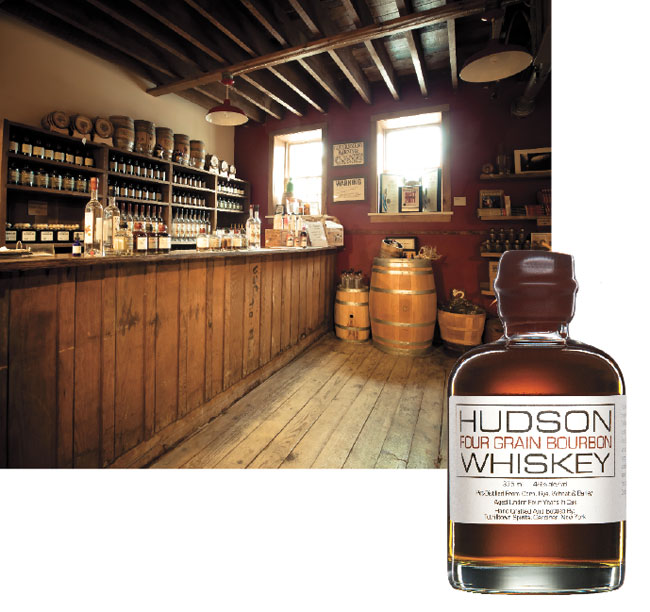 Lay of the land: Partners Ralph Erenzo and Brian Lee converted the 220-year-old Tuthilltown gristmill into a micro-distillery and made their first Baby Bourbon (100 percent corn) in 2006. All their products are sealed in wax, numbered, and dated by hand.

What’s brewing: Hudson Four Grain Bourbon, made from corn and locally grown rye, wheat, and malted barley, is aged for a year in small barrels of new charred American oak. Tuthilltown’s Hudson Manhattan Rye, fermented as full grain mash, is the first rye made in New York since Prohibition.

What’s brewing: Kings County Bourbon, a blend of 70 percent corn and a Scottish strain of barley, is a little sweeter than Kentucky bourbon, with robust spice, black pepper, and caramel notes.