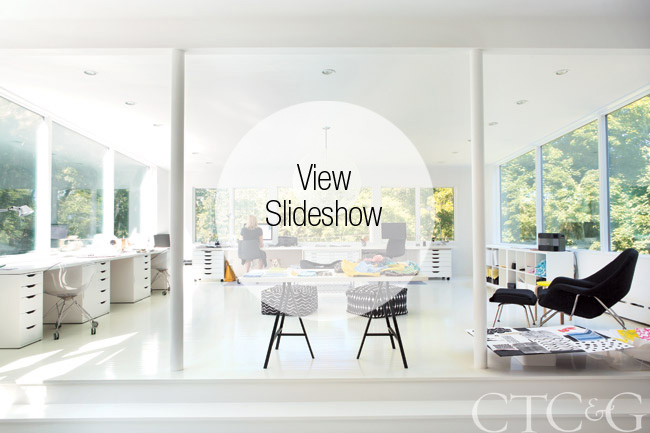 Much has changed since the early ’90s in terms of flextime, the freelance workforce and working from home (Marissa Mayer’s interventions at Yahoo notwithstanding). And Gorman’s work, much of which she did for Finnish textiles company Marimekko and now does under the name See Design, is an incredible mix of playful, thoughtful and deeply resonant.

Gorman studied photojournalism at Boston University and put herself through school by painting designs on t-shirts and kids’ clothes. After graduating, she opened up a small children’s clothing store in New Hampshire, where she sold, in part, her own work. She was 22 years old, running her own business, working for herself, and felt, just a bit, like she was in a tunnel. So she contacted Marimekko out of the blue, and heard back. “I sent them a package of things I had done; I didn’t send them in the proper format, but they called me,” she says. A trip to Connecticut later, and she was working for Marimekko, in Stamford, full-time.

Years later, when the company was sold, they wanted her to keep working with them as a consultant. At first, because it wasn’t cool to work from home, she rented a studio in Norwalk not only to feel like she was going to work but also to have a professional address. Then, a few years later, she realized that her perfect workspace was closer to home, much closer.

Hers wasn’t just any house. Rather, Gorman was living in an old carriage house that had been renovated by Gisue and Mojgan Hariri, sister architects who practice as Hariri & Hariri, and who were just starting a New York practice—they’ve since gone on to do one of the Sagaponack case study houses; multiple high-end residences in New York; and a futuristic Salzburg condominium building. “They proposed something quite radical, relative to what my ideas were,” Gorman says. “But I’m not an architect, and they definitely pushed the envelope.” That envelope is a mix of traditional carriage house with what has become signature Hariri style—a clean line, a strong color, an exterior sense of the internal shape of the occupied space. And it worked, until Gorman needed something else.

A friend of hers, architect John Hix, came to visit, noticed that her patio was causing water damage, and proposed an easy fix: Use space over the garage by breaking out the wall and building over the patio. Gorman liked the idea because it helped structurally, as well as practically and conceptually. The studio now juts out of the dark charcoal building as a gleaming beacon of transparency and openness. It announces itself even as it feels slipped into the building—a move Hix really wanted.

Having the studio has changed how Gorman works at home. “It’s a mindset,” she says. “I’ve managed to be able to separate myself, but still take in the best of both worlds.” She can shut the door to her house, be in the triple-paned glass-walled studio, and work for hours on a textile, just as easily as she can meet a UPS delivery or double check the oven. Very cool.

A version of this article appeared in the September 2015 issue of Connecticut & Gardens with the headline: The Fabric of Life.