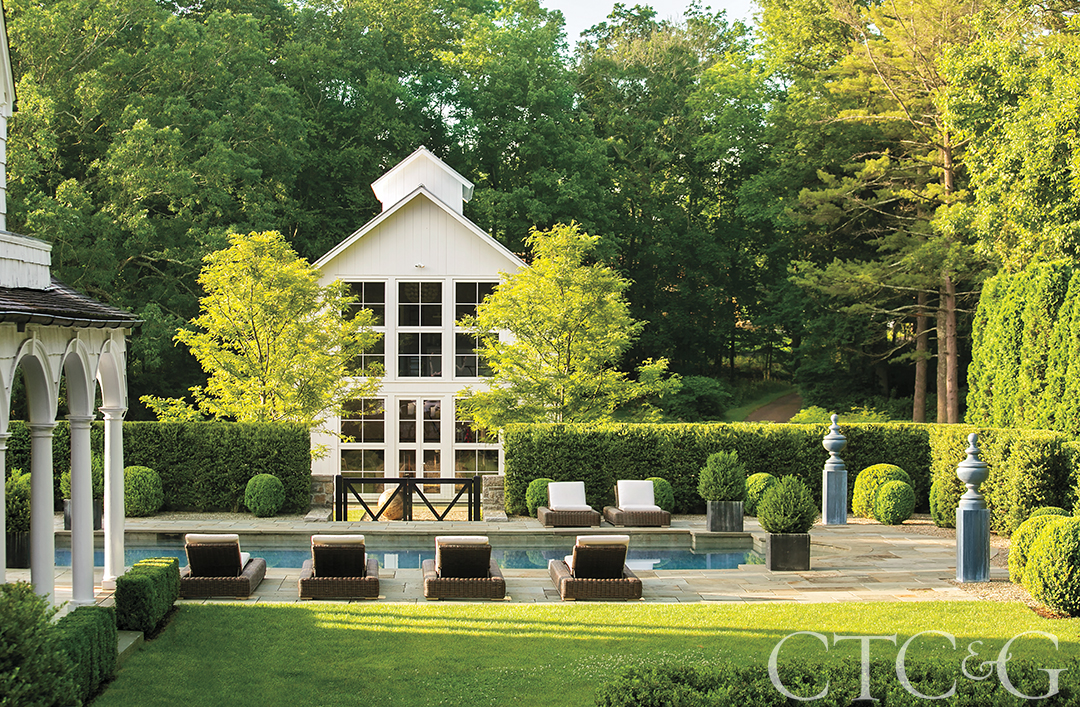 Redone on a grand scale, this Greenwich landscape evokes the timeless noblesse of an Old World estate. With the last shrubs planted just 18 months ago, that is no mean feat. Matthew Willinger, a senior landscape designer at Doyle Herman Design Associates (DHDA), took the lead on this evolving four-year project. The initial request from the client was to simplify and bring privacy to a shared drive leading to the house and to create order at the front entrance. The job grew to become a complete renovation of the landscape, linking the traditional house to a new modern barn/recreation building by Daniel Conlon Architects, reworking the area surrounding an existing pool, and uniting the distinct components of the property into an integrated whole.

The family had been living on the property for several years, including while the house underwent renovation. With the children reaching college age, it seemed a good time to tackle the grounds.

“The client has great style, definite likes and dislikes,” Willinger explains, “and wanted bold shapes and strong contrasts.” It is a style, in fact, not dissimilar to DHDA’s—a firm known for a restrained classicism—an approach that comes honestly to James Doyle, an Irishman who founded the Greenwich firm 26 years ago. Doyle began gardening at a British estate designed by the late, great garden designer Russell Page. In the early 20th century, Page reworked numerous British estates, replacing labor-intensive borders with bold blocks of shrubbery and hedging. It’s an organizational style one can trace back to 17th-century French designer André Le Nôtre. 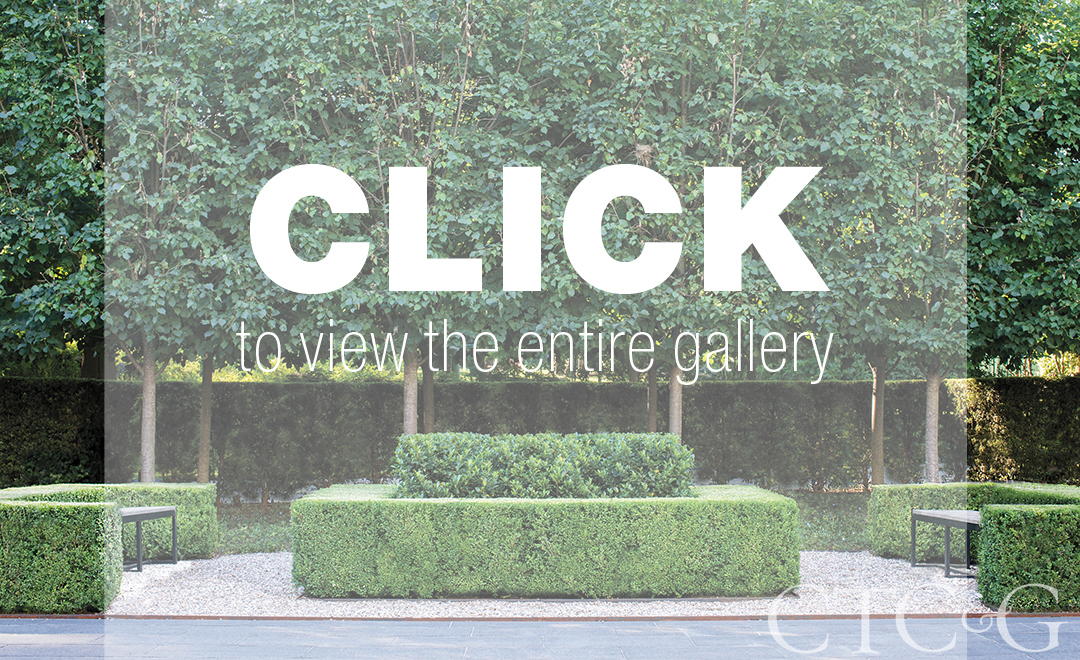 Like Le Nôtre and Page, DHDA has become known for its careful choice of plant material, sculptural use of clipped shrubs, and green-on-green palettes. For this project, Willinger began by taming the main drive with one bold move: He inserted a trimmed five-foot-tall hornbeam hedge. “It looks gorgeous in the winter,” he notes.

An expansive open area at the front of the house was replaced with a landing pad of durable gray granite in a running bond, or brick-like, pattern, flanked with areas of native stone–colored gravel. Opposite the front door and at the far side of the granite panel, Willinger created a box-enclosed seating area on a permeable gravel surface. “Visitors now know where to put their cars,” says Willinger. Low, backless benches tucked in at the sides allow the units to act as a single block. The evergreen box, combined with a pleached aerial hedge of linden trees and blue holly border hedge provide interest in every season.

The addition of a barn/studio retreat with modern details at a distance behind the house created another challenge: how to tie the various pieces together. Here, Willinger created an axis—a new gravel pathway—from the entry court to alongside the house, yard, through the pool, leading right to the barn. A four-foot wooden sphere set in the middle of this nine-foot-wide path was another of the client’s finds. “It’s whimsical and very heavy,” notes Willinger. “I just love it.”

A contrasting black fence and plantings of blue holly define and lend privacy to the pool area and expanded terrace. An allée of elegant honey locusts leads from the barn to the pool, disguising a drop in level from the pool and linking the two spaces together. Willinger incorporated the client’s own pieces throughout—white orange-tree tubs and large zinc planters filled with carpinus, smaller ones planted with boxwood. New to the mix are the zinc finials on pedestals, which add focal points on the pool terrace. With such careful attention to plant choices, scale and proportion, one imagines Le Nôtre would approve.

A version of this article appeared in the May 2019 issue of CTC&G (Connecticut Cottages & Gardens) with the headline: Green, White, & Bold.