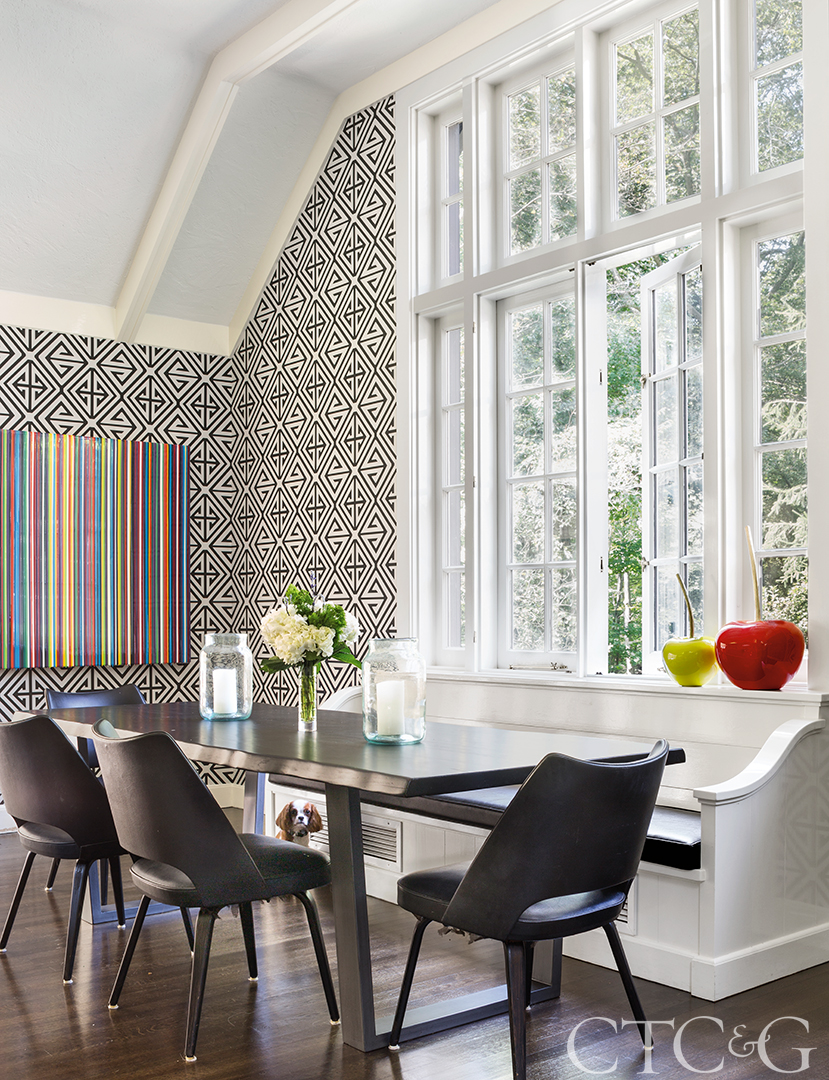 A move from Bedford, NY, to Malibu, CA, led to a new appreciation for modern architecture for interior designer Kimberly Handler and her husband. After a year on the West Coast, they moved back East, where their children were attending school, and Handler put this knowledge into practice. On the outside, the Greenwich home, which sits on just under 10 acres, looks like a traditional Cotswolds cottage—ivy included—on the inside, it’s anything but.

“In the past, we lived in traditional or transitional houses,” says Handler. “I wanted to design this house to be neutral with pops of color and unexpected patterns.” Sweeping changes were made, completely transforming the dated interiors of the 1933 home into a hybrid West Coast–East Coast design.

Since their kitchen is a key spot for entertaining and family time, Handler looked to Mollie Rhodes of Deane for a redesign, along with several other spaces in the house. Handler was still living in California at the time, but she conveyed her ideas to Rhodes and let her take over. “The biggest challenge was working with all the windows,” says Rhodes. With only room for two wall cabinets, most of the storage is in the base cabinets. A peninsula was replaced with a quartzite-topped island, which opened up the room considerably. The ceiling’s beams were painted the same black as the new island, with chic lighting and metal stools delivering an industrial vibe.

But the star of the kitchen is the wine storage. Handler declares it a piece of art—constructed of shower-door glass, stainless steel racks, a cooling unit and lighting. “Why have it in the cellar where no one ever sees it? No one spends any time down there,” says Handler. This was a first for Rhodes, but she’s getting more requests for this type of wine storage, since it can be easily customized for any space.

An informal dining area is steps away with a banquette, boldly patterned wallpaper and equally bold artwork, which is backed by a family room with a fireplace wall of custom built-ins by Deane. This flows into a window-lined sunroom, where backgammon is often played, and the family dogs love to track the local wildlife. “This is the main artery of the home,” says Handler. “We spend all our time between the kitchen, dining area and family room.” 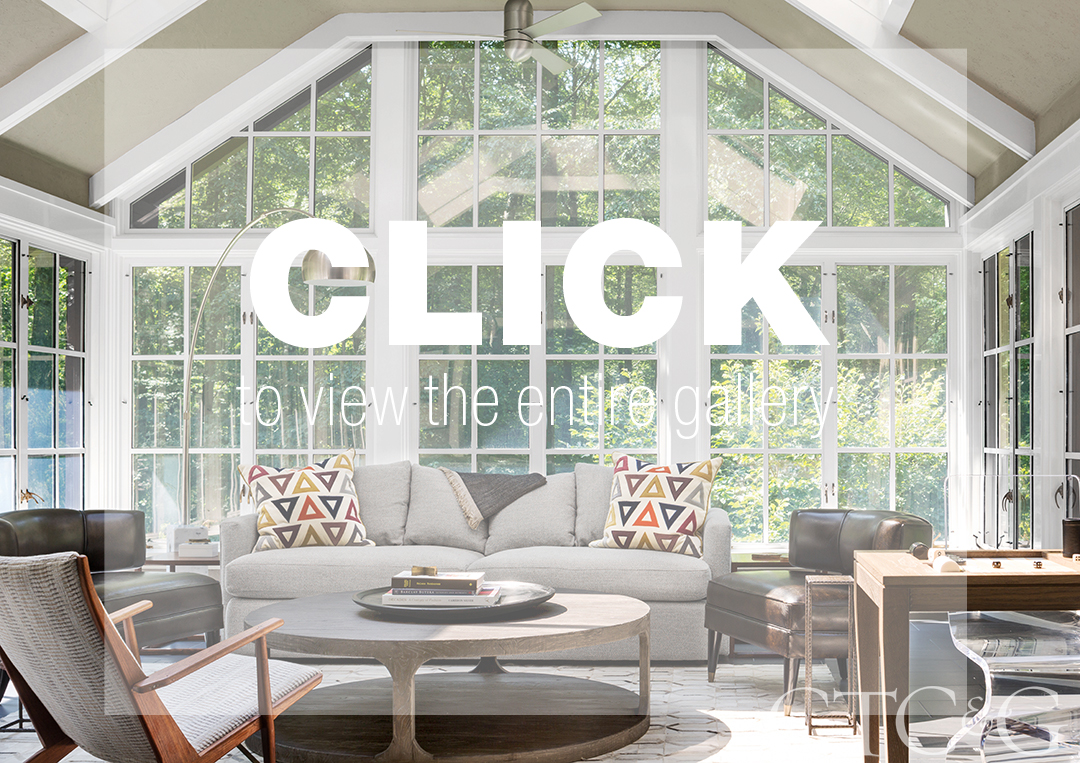 Windows also stretch the length of the long rectangular living room. Here, Handler divided the space with an antique Chinese altar table to create two separate seating areas with back-to-back leather sofas. One faces a gas fireplace topped with large-scale contemporary artwork, the other faces blue high-gloss custom built-in cabinetry by Deane, which houses a large-screen TV that disappears behind a framed mirror when not in use. The adjacent formal dining room also underwent a transformation with an antique Chinese sideboard, emboldened by chairs upholstered in magenta velvet, a chandelier of draped and intertwined chain and a graphic wallpaper.

Handler is adept at using wallpaper in unexpected ways, such as the Kate Spade for Kravet pattern on the master bedroom ceiling, which brings movement and dimension to the otherwise neutral room. In the master bathroom, an old Jacuzzi tub was swapped out for a sleek, ultramodern Waterworks soaking tub, while Jonathan Adler lighting draws the eye upward. Rhodes redesigned his-and-hers master-bedroom closets into one large, more functional unit with layers of creative storage.

At the end of the day, working from separate coasts was never a barrier to success: Rhodes appreciated Handler’s decisiveness, while Handler gave Rhodes plenty of freedom with materials and design. And their shared love of color also united the two designers. “Kim knows when to be neutral and when to bring in the color,” says Rhodes. “She takes chances and jumps in with both feet—knowing that if she doesn’t like something, she can redo it.”

A version of this article appeared in the January 2018 issue of CTC&G (Connecticut Cottages & Gardens) with the headline: Coastal Fusion.