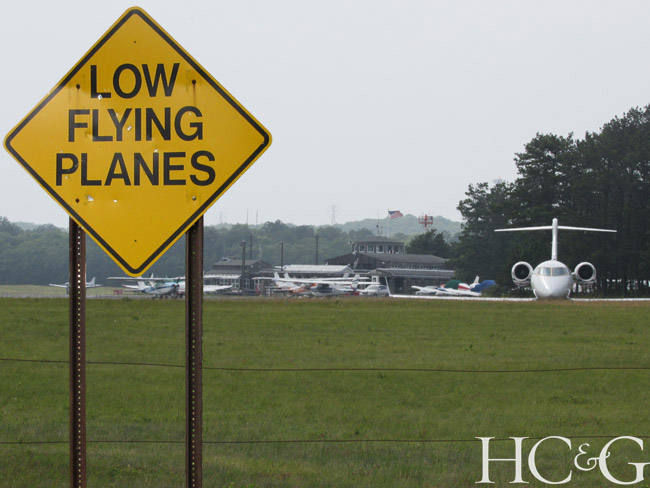 Talk about fight or flight! In April, the Town of East Hampton passed new legislation restricting some of the estimated 130 daily flights (approximately a third of which are conducted by helicopters) to and from its airport during the summer months, though an all-out ban on weekend helicopter travel from Memorial Day through Labor Day was tossed after the town board’s Airport Finance Sub-Committee could not reach a consensus on how reduced airport traffic would affect East Hampton financially. Board members unanimously voted yes to a year-round mandatory curfew on all aircraft from 11 p.m. to 7 a.m., imposing a more stringent curfew, from 8 p.m. to 9 a.m., for “noisy” aircraft (those with decibel ratings of 91 or higher), and limiting them further to once-weekly takeoffs and landings between May 1 and September 30.

In response to the new legislation, a coalition of airport supporters, the Friends of the East Hampton Airport (FOEHA), filed a federal lawsuit against the Town of East Hampton, seeking to overturn the restrictions. “The Friends of East Hampton Airport coalition remains steadfastly committed to preserving East Hampton Airport’s vitality and accessibility to the public,” says FOEHA spokesman Loren Riegelhaupt. “It is deeply unfortunate that we have been forced to sue to stop the town’s actions and convince it to follow its obligations under federal aviation law.” FOEHA has also circulated flyers reading “East Hampton Is Under Attack!” and claimed that lost jobs, local business closures, higher property taxes, and lower property values would result from reduced airport traffic.

On June 26, Federal District Court Judge Joanna Seybert upheld the legislation, allowing the curfews to take effect on July 2 and imposing a preliminary injunction on the once-weekly travel restriction—which means buzzing whirlybirds might still be driving some people batty, though to a lesser degree. “Commercial commuter helicopter operators and owners of private helicopters have absolutely no regard for the populace below,” argues architect Preston T. Phillips, whose home and office lie along the airport’s flight path.