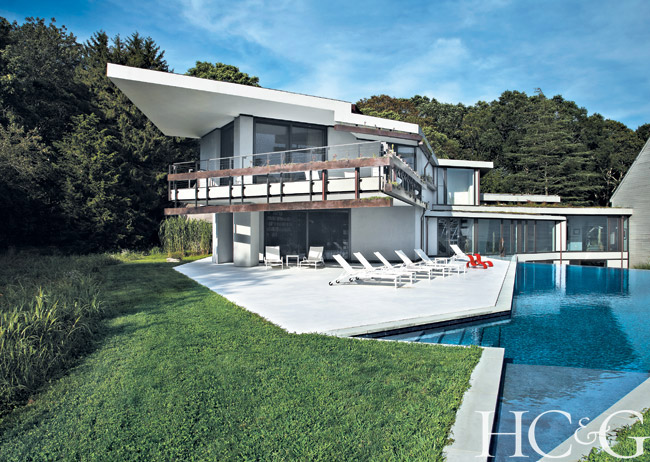 For many people, a primary residence calls for a more ordered existence, but in a weekend house, there are no rules. Marie-Ève and Michel Berty realized this widely accepted truth when they bought a house in the Hamptons. The couple started visiting the East End not long after moving to New York from their native France, and it didn’t take long before they desired a place of their own.

Their prize: a simple, uncomplicated house in the woods of Wainscott, where they spent many weekends over several years, feeling the need to settle in and get the lay of the land before doing any major surgery. When they were ready for something different, they hired architect Alfredo De Vido to build them a new house, and later changed it up once more with the help of East Hampton–based architect Maziar Behrooz of Maziar Behrooz Architecture, who created a striking triangular addition without diminishing the humble lines of the existing structure. 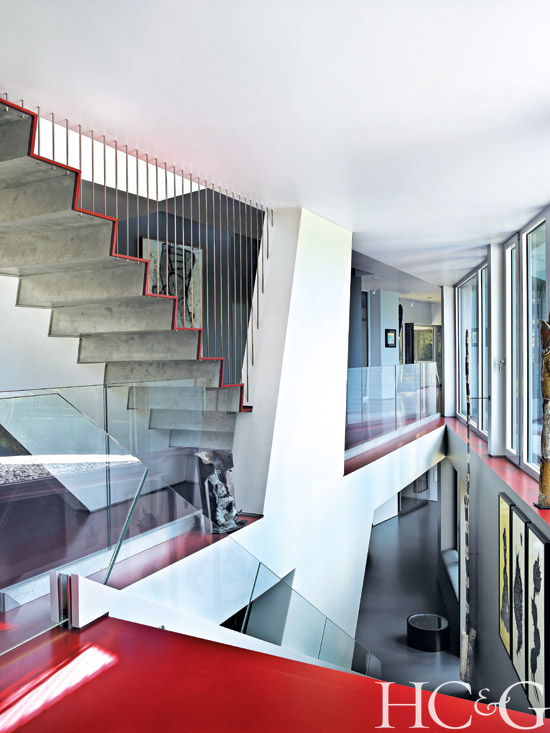 An integral component of Behrooz’s plan was to showcase the couple’s impressive African, Oceanic, and contemporary artworks. Marie-Ève grew up in a home filled with art. Her parents, avid collectors of primitive works, frequently brought their young daughter along on visits to dealers and galleries, and their Paris apartment, filled with 17th- and 18th-century furniture, took on new life with works from more distant lands. As with many Parisian homes, theirs was lived-in, laden with finds from years of collecting. “It was new for us,” Marie-Ève says about the Wainscott home, “to get used to living in something more pared down.”

But by paring down and spreading out, the couple benefited from a tremendously increased living space: The new two-story construction left them with a basement, four bedrooms, a library, a dining area, and covered patios. The artful (and art-filled) addition employs a minimalistic perspective, honed by the spare, interlocking angles and recurring triangular theme. More than just a matter of geometrics, the shape determines the way Marie-Ève and Michel look at their surroundings, inside and out. “It’s like an arrow,” she says. “It always points your eye somewhere.” 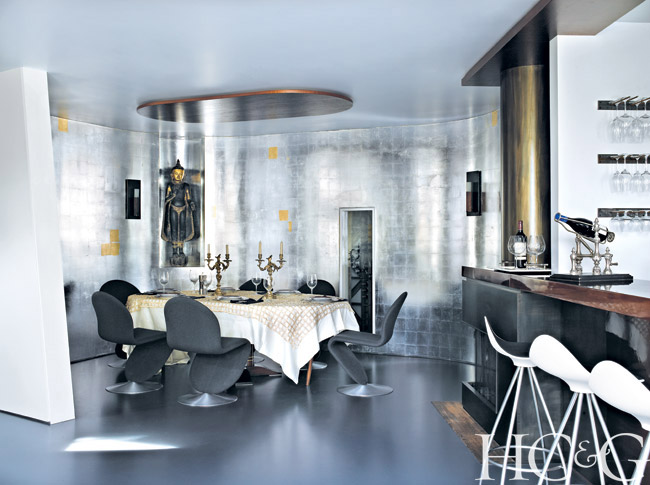 With his design, Behrooz strove to reframe how the Bertys think about their living quarters. He measured the art pieces they planned to bring in and included them in the floor plans. The center of the house—an open area of intersecting planes where most of the couple’s collection is showcased—is dubbed “the gallery space.” Filled with New Guinean masks, shields, statues, and contemporary art pieces, “it’s like having an art gallery as a focal point,” Behrooz says. The shining star of the Bertys’ collection, a totem pole from New Guinea, is planted in the center. “It was used in the longhouses, the initiation houses for young boys about to become men,” says Marie-Ève, who studied art history at Christie’s and has written articles for France-Amérique, among other publications. “Having all this art in our house makes me more interested in the transformative power of it, and makes us see things differently—it’s magical.” 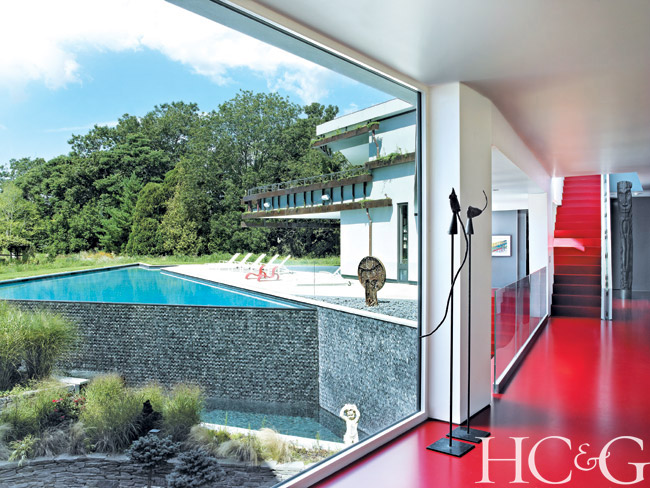 Dramatic artwork necessitated an equally dramatic backdrop. Marie-Ève chose cherry red for the halls, avoiding an art gallery starkness and blanketing the walkways with a sense of warmth. Decorator Tracey Garet, who owns Apsara Interior, helped her with the color palette. “I needed to see how colors worked during different times of the day, as the light changes,” says Marie-Ève. When the house was complete, with each piece of art and decor in place, even Behrooz was moved by the sense of harmony. “An extremely meditative quality took over,” he says.

In addition to the carefully thought-out details inside, both the Bertys and Behrooz reworked the outdoor spaces extensively, planting terraces and adding a saltwater pool and a pond. “It’s always been very important to us to acknowledge the natural beauty of Long Island,” says Marie-Ève, who enjoys the ducks and frogs that visit regularly and the fireflies that glow at night. “I’m still in love with it after all this time, in summer and all year long.”

A version of this article appeared in the August 15 2014 issue of Hamptons Cottages & Gardens with the headline: Soaring Style.