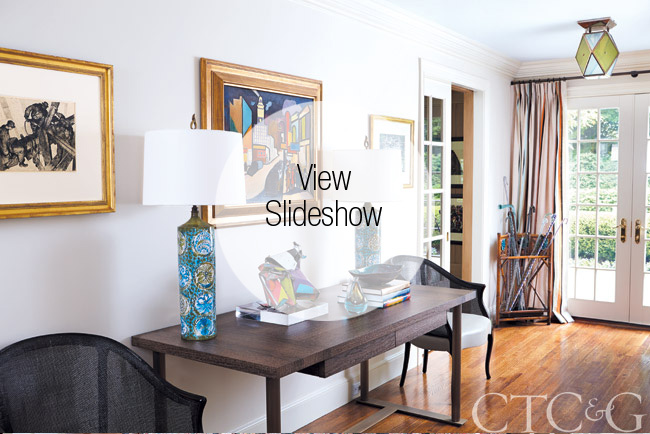 A decade ago when a Cooper-Hewitt, Smithsonian Design Museum board member went shopping for a weekend getaway, adequate display space for her impressive art collection wasn’t uppermost in her mind. She had a New York apartment for that, so small and cozy was just fine. While the 1920s Colonial Revival she settled on may not have been her dream house (“It had no moldings, no charm, and I really didn’t love it,” she says), she purchased it anyway planning to give it some character and enjoy it as a retreat.

The addition of crown moldings and wallpaper proved an effective short-term fix. But when she decided to move to Connecticut full time, the home’s lack of a commodious gathering place, closet space and a proper master bedroom became blatantly evident. Together with interior designer Jennifer Cohler-Mason, she crafted an addition defined by an eclectic blend of design styles and a color scheme that emulates its lush surroundings. They also created an expanded backdrop for the vintage 1920s, ’30s and ’40s prints and paintings (many from the American Precisionist movement), the homeowner started collecting three decades ago. “I didn’t collect the work because it was popular, I bought it because it was affordable and I loved it,” she says.

According to Cohler-Mason, the spectacular grounds drove the decision for a sunroom wrapped in glass. “She wanted to see the rolling yard clear out to the weeping willows,” says the designer, who drew inspiration from the outdoors for the organic blue, green and brown palette. “In most houses, the kitchen is the heart of the home. But any time of year, people gravitate to this room.”

A sprawling green tweed sectional provides the room’s organizing feature. It is joined by a custom banana-silk rug, a vintage ’50s Italian brass light fixture, a pair of club chairs reupholstered in a velvet print, and an ottoman sporting blue calf hair. Wall paneling painted to resemble striated wood infuses the room with a midcentury-modern vibe. “I’m not a matchy-matchy formulaic designer; I think things are more interesting when you mix it up,” says Cohler-Mason, whose philosophy matched her client’s desire not to have any room in the house defined by one time period.

Further tying the house to its surroundings is an existing screened-in porch where the vintage furnishings unearthed by the homeowner at a shop in Palm Beach are topped with bold orange fabric. The vibrant hue inspired plantings of a similar color in the beds along the stacked stone walls designed by landscape architect Dan Sherman.

For the master bedroom, Cohler-Mason was determined to create a soothing space. “Her previous bedroom was brown, gold and camel, and it didn’t feel like a happy place,” says the designer, who swathed the room in a serene blue-gray wool sateen fabric before layering the space with furnishings and accessories all wearing hushed azure tones. “Even though it’s monochromatic, it doesn’t read that way. It’s a place to escape the hectic moments of life.”

The private outdoor living area with its wrought-iron furniture and retractable striped awning is a study in black and white. “I always include an element of black because it’s so grounding and in this case, coming off of the bedroom, so unexpected,” says Cohler-Mason. The weathervane in the bedroom window—“a nod to Connecticut,” she adds—and a Foo Dog sculpture keeping watch in the garden are other intentional elements of surprise.

Along with her paintings, over the years, the homeowner has procured collections of everything from turquoise Blue Mountain pottery to Murano glass. And with the precision of a curator, she has assembled enchanting still lifes throughout the house. “I like having collections and putting them around to make them my own,” she says. “I didn’t want my house to look different, I wanted it to look like my house. And the art and collections are an important part of making that happen.”

A version of this article appeared in the November 2014 issue of Connecticut Cottages & Gardens with the headline: Well Curated.