Colombo started experimenting with fire in fall 2001. "I was sitting on the beach in front of an empty fire pit," she recalls, "and the wood was all wet. I thought, If only I could just hook up the gas from my house and flick on a bonfire..."

A self-described practitioner of “healthy pyromania,” Elena Colombo started experimenting with fire in fall 2001, after 15 years as a producer of television commercials. “I was sitting on the beach in front of an empty fire pit,” she recalls, “and the wood was all wet. I thought, If only I could just hook up the gas from my house and flick on a bonfire . . . ”

Eleven years later, Colombo is hard at work creating large-scale fire features for such clients as André Balazs’s Sunset Beach hotel and the Jonathan Adler–designed Parker Palm Springs hotel, as well as taking on a variety of commissions from a curious and compelling mix of bold-faced names including Anne Rice, Lisa Marie Presley, and Cher.

A classically trained sculptor, Colombo is involved in each project from start to finish. “The idea grows in my head, and then I translate it to paper at my desk in Brooklyn,” she says. “I travel to metal fabrication shops all over the tri-state area to oversee the cutting, bending, rolling, and general assembly of each piece.” Her latest project is a duo of solid silicon bronze nests that boast a three-foot flame in the center. For months, Colombo drove around in her pickup truck and searched for the perfect fallen tree branches to replicate the components of the nests. At a Farmingdale foundry, skilled metalworkers dip the branches in hot molten bronze, which are then cooled and assembled into the fire nests. 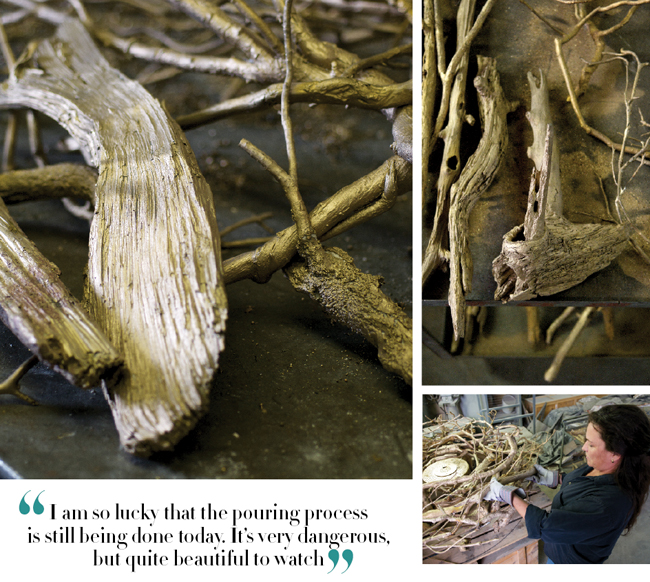 “I am so lucky that the pouring process is still being done today,” says Colombo. “It’s very dangerous, but quite beautiful to watch.” The four-feet-diameter nests, which will be shipped to clients in Miami and Australia upon completion, are controlled by a manual pilot ignition system that makes the branches glimmer with flickering flames.

What’s next for the woman who loves to play with fire? Water, naturally. “I’m creating ten large-scale fire and water features for a residence in Santa Barbara,” Colombo says. “Beneath a still pool of water is a hidden burner, and the flame looks like it comes directly from under the water. But I’m keeping the rest of it a secret.”

This article appears in the December 2012 issue of NYC&G (New York Cottages & Gardens).