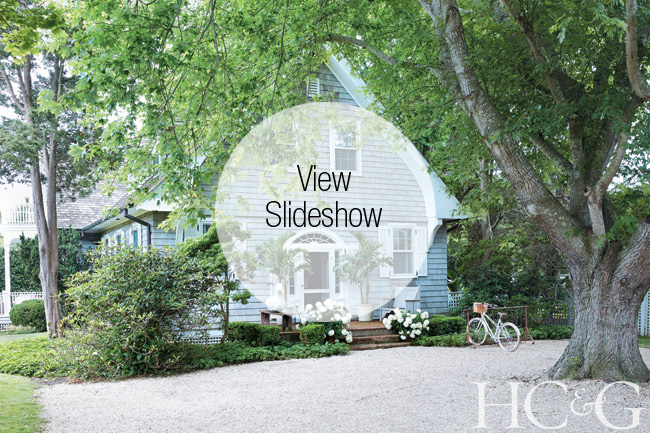 The stress often associated with owning a second or even a third or fourth home doesn’t faze Michael Bruno in the least. He already owns a venerable house in Tuxedo Park and a New York apartment, but when a Grosvenor Atterbury mansion became available last year on Coopers Neck Lane, Bruno and his partner, Alexander Jakowec, couldn’t resist. Years ago, they sold their Lake Agawam estate after a meticulous renovation, but the pull of Southampton proved to be too great: They wanted to come back.

The new Atterbury house, which is more than a century old with a smattering of recent additions, requires a little “updating,” to borrow a phrase from real estate parlance. In order to keep a close eye on the renovation, the couple decided to rent a charming carriage house nearby on Gin Lane—a home they almost bid on at the time of their Lake Agawam purchase.

“I loved this place so much when we first saw it,” Bruno says, “but at the time, the Lake Agawam house just made more sense for us.” The deeply gabled, beautifully detailed structure, according to Sally Spanburgh’s The Southampton Cottages of Gin Lane (History Press), “was the stable/carriage house of To Windward, a house across the street at 71 Gin Lane built in 1897 for William Allen Butler, Jr., a lawyer and senior partner in the firm of Butler, Wyckoff & Campbell.” To Windward, no longer extant, was likely destroyed during one of the hurricanes of the 1950s, and now the carriage house is facing a tempest of a different sort: Recently sold, it will be torn down when new owners take possession of the property later this year. “It’s so sad and wrong,” says Spanburgh, who is the chair of the Southampton Town Landmarks & Historic Districts Board.

In the meantime, though, Bruno and Jakowec have been enjoying their summer rental to the fullest. “We just painted everything white and brought in some furniture we had in storage in Tuxedo,” says Bruno. That the founder and former owner of 1stdibs.com had some spare pieces on hand is no surprise. His well-documented residences have always featured eclectic furnishings, including the living room’s chic brown velvet mohair Ralph Lauren Home sofa and club chairs, now-vintage finds that have traveled with him ever since he lived in San Francisco and worked in real estate, before 1stdibs.com was a glimmer in his eye.

The spareness of the rooms in such an airy, characterful abode feels distinctly modern, perhaps due to the structure’s utilitarian past. But what drew Bruno most was its sheer Hamptons-ness. “It’s a page from the East End of years gone by, which is what lured me out to the Hamptons in the first place. And it has an energy that is really sweet—more animal energy than human energy. Perhaps it’s because I like horses, and spending time in a barn is good for me.” His favorite space in the house is the sitting room off the kitchen—an area he had first thought of as unusable, but which has become command central with the addition of a green leather Harvey Probber sofa and a large painting by his L.A.-based sister, artist Sally Bruno.

Bruno’s latest project is Housepad, which he launched this summer as a smartphone app, currently in its beta-testing stage. Designed to help people manage their house (or houses, as in Bruno’s case), it allows users to photograph every room, down to the tiniest detail, and organize and share the pictures with household staff. So if you like a karate chop on your throw pillows, your cleaning lady will have a visual reference point as a guide. Added features like “to do” lists enable users to take a photo of a problem area and assign it to a plumber, painter, decorator, or other service professional. “This app resulted from my need to keep my life organized and manage the people who are working on our houses,” Bruno explains. “Now every time I walk into any of our homes, it is just as we like it. And the people we work with are really into it, too. Our contractor in Tuxedo Park responds to my requests with a simple ‘Put it on the app!’”

A version of this article appeared in the September 2015 issue of Hamptons Cottages & Gardens with the headline: Romantic Rental.