Taste testing some of the area's delicious drinks and best bar bites. Find out who made the list! 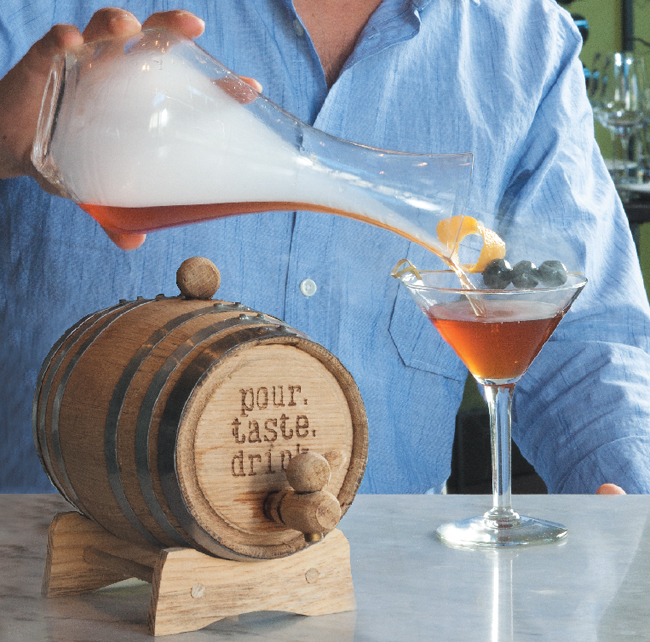 On my first cocktail crawl in Fairfield County—accompanied by my trusty band of revelers—I tested potent cocktails and small-plate delicacies created by some of Connecticut’s most talented mixologists and chefs.

GREENWICH
The crawl kicks off at J House (1114 East Putnam Ave., jhousegreenwich.com), a high-design hotel and restaurant with indoor and heated outdoor bars that opened last May. A Howard Johnson in its last incarnation, “J” was kept in the name but everything else was upgraded. It now boasts a contemporary art collection, a “chocolate lab” and a 3,000-bottle wine room. J House is also Greenwich’s dating mecca; Tuesday at 6 p.m. is prime time.

Then, Brandy creates a Pear Pie (Basil Hayden’s bourbon, burnt honey, organic pear purée, fresh lime juice, cloves). Served in a martini glass, the cocktail is delicious as well as decorative, with its crown of egg-white foam. A tasty snack of house-made smoked duck carpaccio with poached pear chutney appears just before we crawl on.

STAMFORD
We burst into Napa & Co. (75 Broad St., napaandcompany.com) with its floor-to-ceiling windows to witness mixologist Eric Ribeiro smoking our drink with a long tube attached to a smoker machine. The BFF cocktail had been in the works for 45 days. Eric has been aging Woodford Reserve bourbon—along with Cherry Heering, Cointreau and Grand Marnier—in a wooden cask. Eric first infuses bourbon with smoked bacon for several hours, and then combines the barrel-aged bourbon mixture with the bacon-infusion and garnishes it with Luxardo maraschino cherries. The resulting flavor is breathtaking.

Chef Leonardo Marino—newly at Napa & Co. after Manhattan stints at Bouley and Le Bernardin—brings out crispy smoked Berkshire pork belly with dried cranberries, duck rillettes spiced with Balinese pepper, and a flatbread pizza topped with smoked bacon, shallots and crème fraîche. All pair perfectly with the bourbon, and we giggle that there’s a lot of “smoking” going on at Napa & Co.

For his second act, Eric prepares a hot Gluhwein with ruby Port, another labor-intensive cocktail that requires roasting oranges and cloves in the oven, making a reduction of port and sugar, and boiling cinnamon sticks.

SOUTH NORWALK
When we pull up to Match (98 Washington St., matchsono.com), we are ready for dessert. Apparently clairvoyant, barman Jaime Martinez crafts a Pumpkin Martini (Smirnoff Vanilla vodka, Captain Morgan Spiced Rum, Baileys Irish Cream, Hiram Walker Pumpkin Spice Liqueur). He shakes the mixture with ice, strains it into a tall glass and garnishes it with a large cinnamon stick.

When a thick bacon steak with spicy cherry peppers lands on the bar, we aggressively fork it. It’s a good accompaniment to the sweet drink.

The crawlettes reminisce about times at Match, which was designed 13 years ago by architect Bruce Beinfield as a big industrial loft space with exposed pipes and a stainless steel bar. We feast on carpetbaggers (oysters flash fried with truffle brandy) while sitting at one of the famous round booths.

WESTPORT
Rallying for our final stop, we hitch our wagon to The Spotted Horse (26 Church Ln., spottedhorsect.com), a charming white house with orange awnings that opened just months ago. Packed with a good-looking crowd, the beamed-ceiling clubhouse bar, sporting horse portraits, opens into a handsome dining room with a glowing stone fireplace.

Co-owner George O’Connell greets us with a round of Sir Isaacs (Bulleit bourbon, applejack, fresh lemon, orange bitters, garnished with an apple slice), which has a simply brilliant flavor and great balance. We sip it against Szechuan shrimp sprinkled with candied peanuts and steak tips with chipotle mayonnaise.

The nightcap, Spicy Pumpkin Martini (Stoli Vanilla vodka, Molly’s Irish Cream Pumpkin Spice), comes in a glass rimmed with a mixture of chocolate cocoa powder and graham crackers. When George offers a slice of pumpkin cheesecake to match the martini, my stuffed revelers turn a shade of green, and I rush off to catch the late train back to Manhattan.