Updated and infused with charming finds from the area, a vintage Litchfield home comes into its own 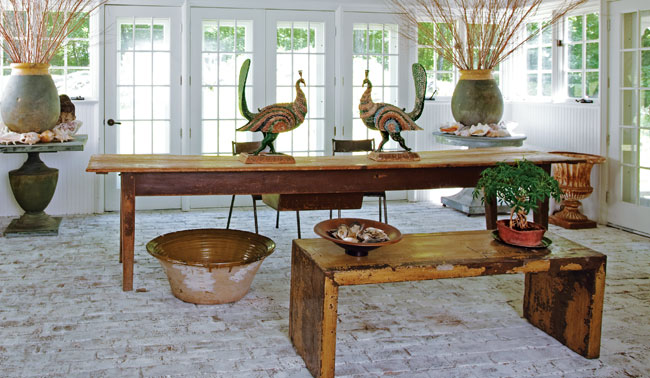 Given its dilapidated state, Betsey and Peter Nestler’s purchase
of their 1845 Victorian farmhouse in Washington could only be considered an act of folly mixed with a huge dash of optimism. They liked its central location as a full-time residence, however, as Peter travels around the country for an international company, and visits New York City a couple  of times a week.

Admittedly that was more than 30 years ago, and Betsey says now that she had no idea the place would need so much work. “It was a mess,” she remembers. “There was a gaping hole in the ceiling, and a lot of the walls were absolutely shot. One day there was a big crash upstairs, and we discovered that the ceiling had fallen down!”

At the time, the Nestlers were too busy working and raising their children to embark on a total renovation. So in the meantime, Betsey busied herself by starting several design stores in the area that sold vintage furniture and found objects. These included Jonathan Peters, and Betsey and Duane (with partners Bruce Glickman and Wilson Henley from New York). Over the years, the couple’s two sons would come home to find furniture they couldn’t sit on: “It’s already sold!” Betsey would sing out. 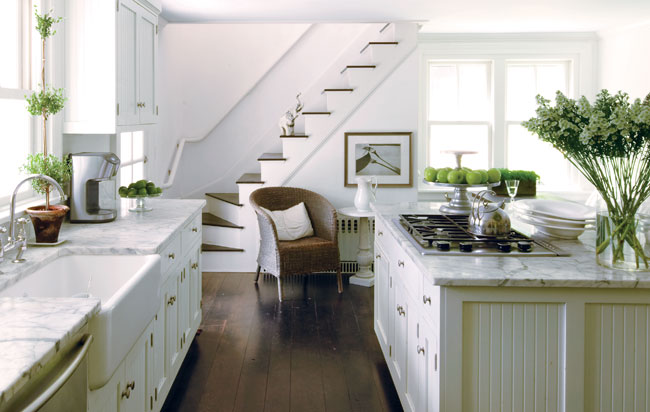 The years went by. Little by little the Nestlers got all of the essential repairs out of the way—and replaced areas of the house where the damage was beyond repair, including the side porch, off the kitchen. They economically replaced a rotted wood floor in the dining room with antique brick—which was an inspired and original choice of materials.

But it wasn’t until 2005 that they decided to finally finish the house, when Betsey flatly refused to use the kitchen until it was renovated. By then her grown son, Pete, was available to pitch in; he took over the project with the help of a fellow carpenter and built his mother a brand-new kitchen. He installed marble countertops, a very functional kitchen island, and created a seating area to one side by opening up the back staircase, which added space to the already good-sized room. Bathroom renovations followed, and the upstairs rooms were cleaned and painted, including the floors.

All told, the renovation took about six months.

Betsey had known all along that the front porch looked “wrong,” so she wasn’t surprised when they discovered a photo of the house from the 1950s, one that revealed the stairs in their original position. Today, the front of the house has been restored to its original symmetry.

The front room that spans the main part of the house is filled with Betsey’s past finds, all sitting on a neutral background of white walls and a wood floor painted black. Deep wall-to-wall shelving was painted dark brown inside to accentuate Betsey’s collection of white coral.

Almost everything in the house was found in surrounding Litchfield County. The metal kitchen furniture came from the late Judy Hornby in Bantam, while antiquarian and landscape designer Michael Trapp was the source for Betsey’s Asian-inspired fabrics and pottery. 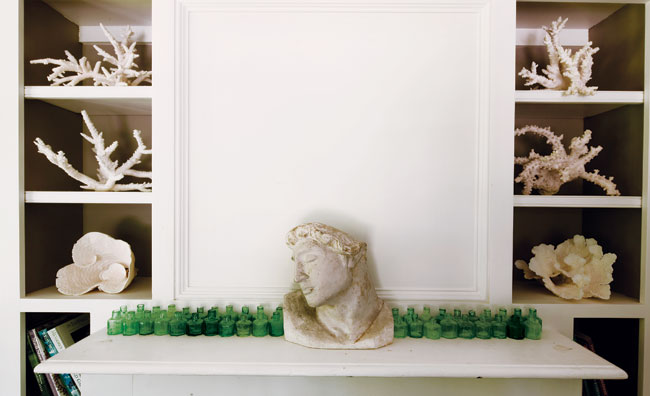 The living room is furnished with comfortable white upholstery. A bold perforated screen in natural wood from her now-closed store, Betsey and Duane, gives definition to the space. Her former partner, Glickman, whose New York City antiques shop, Duane, has a strong midcentury modern flavor, says, “Betsey has amazing taste, she found a way to incorporate midcentury into the styles she always favored.”

Now that the Nestlers’ children have moved out, Betsey and Peter are enjoying the extra space and comfort afforded by their newly renovated house. But Betsey isn’t finished—not with so many wonderful treasures yet to be unearthed.

“I still love Washington,” says Betsey, “and I am really thinking about opening another store!”