Scott and Kathy Formby, co-creators of the new fashion label No.1808, apply their carefully honed aesthetic at home in Amagansett, in a 1982 house designed by Julian and Barbara Neski 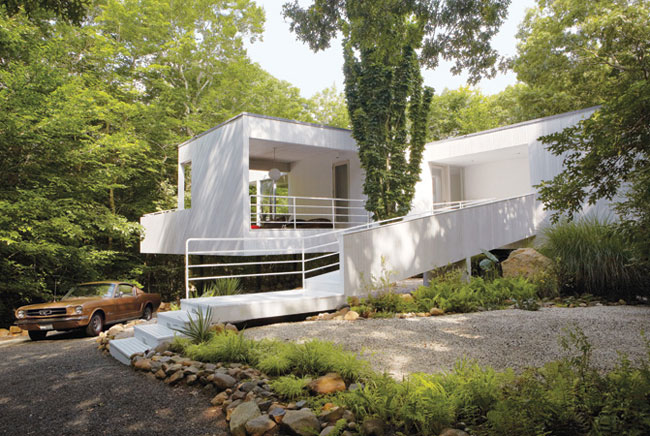 A STRIKINGLY MODERN HOUSE IN THE Amagansett woods was not what Kathy and Scott Formby had in mind when they started searching for a weekend place in the early 1990s. “We soon found that the typical shingled Hamptons farmhouse has small windows and chopped-up rooms, and we thought, maybe we should look at something more modern,” Kathy Formby recalls. Then they saw “this amazing structure, like a tree house in the woods”—and were sold. Theirs isn’t just any modern house. It is one of 35 innovative homes, many on the East End, designed by Julian and Barbara Neski, the distinguished architectural team behind the famous fin-shaped 1964 Chalif house in East Hampton and the white-cube 1968 Cates house in Amagansett. The Formbys’ home is a fine example of, as the New York Times put it in Julian Neski’s 2004 obituary, “functionalist simplicity combined with sculpturally expressive form.” 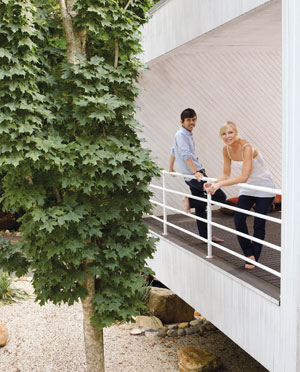 Built in 1982, the three-bedroom, two-bath house is an L-shaped arrangement of cedar-clad boxes, with partly enclosed decks off every room. The whole is cantilevered several feet above the ground. “Because it was in these woods, it had to be a tree house,” recalls Barbara Neski, “and you had to be able to run a car underneath it. That was nothing new—Corbu did that years ago—but we knew it had to perch.”

“We’re living in the trees, at eye level with leaves and branches,” says Scott Formby. “One wall of the main room is all glass, so as the trees change with the seasons, the color of the room changes too.” The Formbys are so fond of the two-acre property’s established beeches and oaks that they scrapped the idea of a swimming pool because, as Kathy says, “We just didn’t have the heart to chop down the trees.”

The decor, which has evolved gradually over the years, is an unforced mix of pedigreed mid-20th-century furnishings and colorful Moroccan textiles. Vintage Knoll sofas, low-slung Danish modern pieces and a handsome Jens Risom dining table are the mainstays. A variety of rugs, poufs and cushions on the floors and sea-grass wall coverings add character. “We weren’t going for any style in particular,” Kathy says. “We acquired things over the years and chose what seemed to fit the sensibility of the house.” 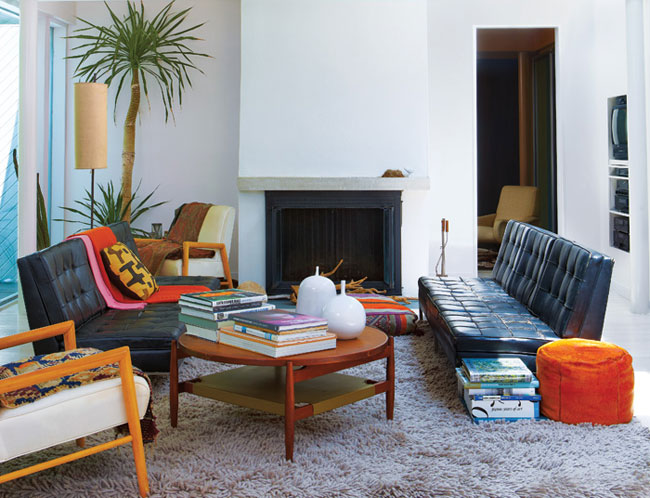 The couple met while both were working for Ralph Lauren. Scott, a Texas native, has also worked at J. Crew and Lucky Jeans, and Kathy, who hails from Ohio, at Calvin Klein, Chanel and Donna Karan. “The same things you bring to fashion—an eye for color and texture and textiles—you apply to decorating a house,” says Scott.

Together the Formbys have just embarked on a new fashion venture of their own, no.1808, a line of women’s clothing and accessories to be sold at specialty stores, including Gail Rothwell in East Hampton. They have an apartment in Greenwich Village and a house in the Hollywood Hills, so life can get hectic. When they do manage to get out to Amagansett, says Scott, “It’s a great outlet to have this house, filled with classic pieces we want to live with for a long time. It’s a relief from working in the fashion business, where everything changes every three or four months.” 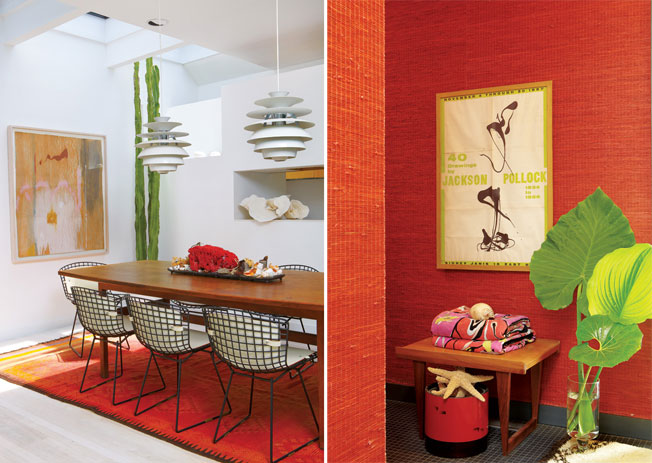 Barbara and Julian Neski, who worked together in the office of Marcel Breuer in the 1950s, were delighted to see how the Formbys, only the house’s second owners, decorated the space—and no doubt were pleased that they made no structural changes. Mindful of the original architecture, the Formbys did little beyond refinishing the floors, bleaching them in the main space and applying an ebony stain in the master bedroom. “Scott and Kathy really understand the house, and they furnished it so beautifully,” Barbara Neski says. “I think the house appreciates it, too.”