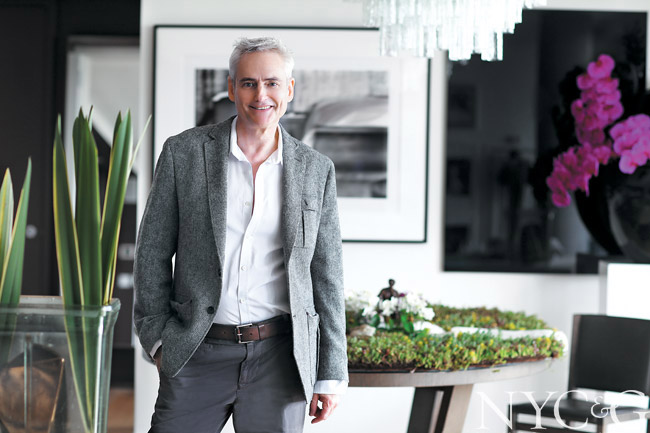 One day about seven years ago, Olivier Giugni and a friend attended a gospel performance in Harlem and decided to take a walk around the neighborhood afterward. Giugni, a floral designer who has been the creative director and owner of L’Olivier Floral Atelier for more than two decades, was impressed with the European scale of the boulevards and the proximity to Central Park. When the native Frenchman spied a glass apartment tower going up at the park’s northern edge, he thought, Why not ask? “The secret is not to be afraid to be adventurous,” he says. “So immediately I put my apartment on 14th Street on the market. It was a fast sell—everything downtown sells like a croissant!”

Today Giugni’s guests enter his 16th-floor Central Park North aerie amid walls sheathed in a deep chocolaty plum. All the better to set off the brilliant view from the open living area, which has vistas across the length of the park down to One World Trade Center at Manhattan’s southern tip. The apartment is an enfilade—a procession of rooms, each with its own balcony overlooking the Harlem Meer. “This way I get an amazing park and greenery, but I don’t have to pay for it—or tend it!” he says with a laugh. From his vantage point, the park strikes a particularly personal note. “The Meer reminds me of the gardens of the Île St. Louis—surrounded by water, with lots of weeping willows, too. Even the lampposts are similar, giving off a mysterious and beautiful light at night. And the Conservatory Garden at Fifth Avenue and 105th Street makes you feel as if you were transported to the Jardins des Tuileries.”

Giugni grew up in Provence, surrounded by flowers. He liked the feel of the soil and found he had a natural affinity for working with plants. After moving to Paris, he landed a job with Pierre Cardin, who installed him first at Les Fleurs du Maxim’s, where he learned to improvise and experiment. Then it was on to a sister store in Tokyo, and finally New York. “As soon as I got here, I knew I’d never go back to Paris,” says Giugni, whose hand is evident in the splendid flower arrangements in restaurants like Daniel and at the Carlyle Hotel. He also has a roster of well-known celebrity clients and is shrewdly discreet about naming them—though a poster in his guest room, inscribed “Pour Olivier, with all my love, Brigitte Bardot,” gives him away. 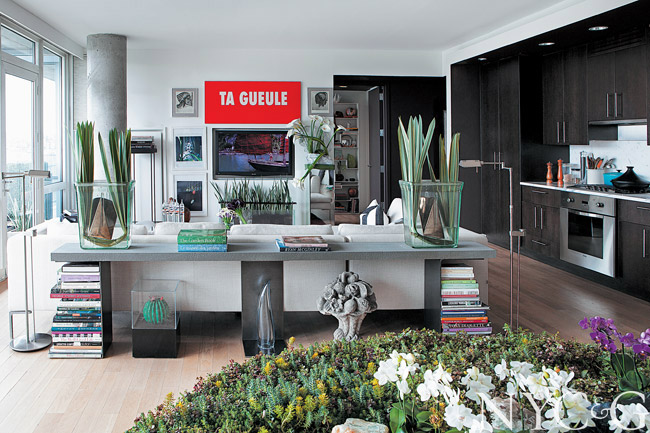 Giugni’s signature is his flair for the unexpected—theatrical knotted stems, curling wild garlic, and antique fragments, shells, and geological specimens all have their place in his creations, in which green always has a special significance. “I use green the most in my floral arrangements because it is clean and simple and lively,” says the designer, who counts leaf-wrapped vases among his innovative trademarks. He is particularly drawn to the fresh astringency of “green” scents, so much so that he has created his own Vert de Vert candle, fragrant with olive leaves and twigs, eucalyptus resin, and African geranium, among other botanicals. “The color green reminds me that we must take care of the planet, and I do the best I can in my own way,” adds Giugni, who regularly makes arrangements at home from unsold or leftover flowers. “I love letting them enjoy a full life. You can change your daily existence with flowers and plants—they bring about energy and joy.” 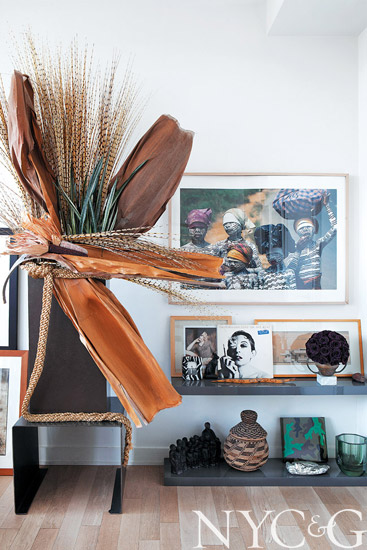 Although Giugni lives in a sleek glass structure, cold modernism is not his style. “I like to move things, edit, even exchange furniture with friends,” he says of the apartment’s ever-evolving landscape, replete with art, finds from his travels, and inventions of his own. He commissioned the handsome console, cut to measure from garden stone and mounted on iron C brackets, while a distressed pedestal castoff from a photo shoot adds to the artful dishabille. “I don’t like anything too perfect—I like to buy things that no one else would buy and then reimagine them. You can train your eye that way.” Seeing potential in the overlooked and discarded seems to be Giugni’s forte: A plate of black glass from an old cabinet now makes a chic counterpoint to an Alexander Vethers photograph above the dining table; in Giugni’s bedroom, inexpensive mirrored sliding doors turned on their side and mounted on the walls ingeniously reflect streamlined slices of the park.

Giugni has come to embrace life in Harlem full-on, even moving his atelier into a former stable on East 123rd Street about a year ago. (He still maintains his original boutique, on East 76th Street.) “I felt out of my comfort zone for about three years,” he admits, “but now this is my territory. It even feels a bit rural. For me, the stress of living in New York stops at 59th Street. Here, I am in the country.”

A version of this article appeared in the May/June 2014 issue of New York Cottages & Gardens with the headline: Oliver's Twist.