For Designer Campion Platt, a Humble Bungalow on the Water Is the Key to Summertime Fun 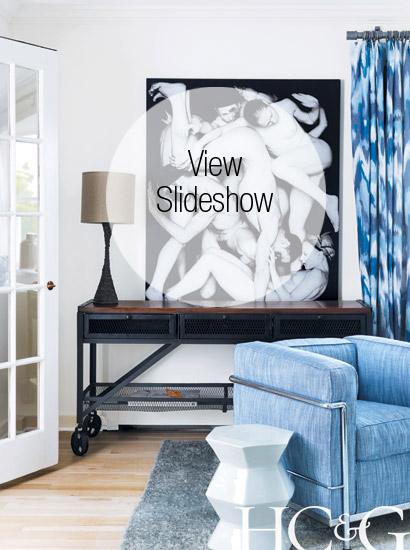 Most people would guess that the home of an architect and interior designer is always the biggest and baddest on the block. Not so when it comes to Campion Platt. Nestled in a neighborhood of iron-gated fortresses in the heart of Water Mill, the waterfront bungalow that he shares with his wife, Tatiana, and their three children is anything but amped up. “We’re the last holdouts,” he says. “We’re like the Clampetts!”

If so, they’re the hippest hillbillies in the Hamptons. Beyond their unapologetically simple wooden front gate is a yard with an organic flower garden, a fire pit, and a couple of wicker tree swings for the kids to play on. The dock, which juts into an inlet of Mecox Bay, is the site of many an alfresco meal, with an evening’s entertainment often including a parade of swans—cygnets in tow—and carp, all floating among the cattails near the shore. “It’s about maximizing our location on the water as much as possible,” says Platt, who opened up the home’s kitchen, living room, and glass-walled dining room in order to take advantage of the heady vista.

The four-bedroom, two-bathroom cottage was 50 years old when Platt bought it, and originally he intended to tear it down. At the time, he and Tatiana—an internet entrepreneur and a former senior executive at AOL—had plans to build a new residence in Palm Beach, so Platt decided on a straightforward remodel. While he is accustomed to designing sizable homes for clients such as Al Pacino, Meg Ryan, and Conan O’Brien (not to mention a modern barn-like residence just down the street), Platt wanted his own house to be durable, fun, low-key, and comfortable, especially since summer is the season when his family uses the place most.

With functionality in mind, Platt fashioned interiors and used materials that are both chic and casual, such as the duck cloth on the living room’s custom-designed sofa, which can be easily removed and cleaned. A GloDea coffee table, made from eco-friendly yellow pine and stainless steel, proved to be a wise choice, says Platt, “because I knew all three children would end up standing on it at some point.” The house’s easy, open flow from room to room accommodates uninterrupted games of tag as well. “It’s liberating for a child, and from an architectural standpoint, it also lets things breathe.”

Platt describes himself as both a modernist and a romantic, and his choice of artwork exemplifies these polarities, from the plainspoken Laugh Piece by Yoko Ono to a pair of sensual James Houston photographs of dancers that hang in the living room. In the hallway and master bedroom, Dagmara Weinberg’s kaleidoscopic photographs (titled Snowy Branches, Leaves, and Tree Bark) take their cue from nature, and the children’s creations, needless to say, are masterworks.

The natural world is more important than ever to Platt, who has designed a new collection of green fabrics for HBF Textiles. “Commercial fabrics must be certified environmentally safe if they are used in public buildings,” he says, adding that a recent “green” experiment at home—planting a crop of pea shoots in the organic garden—has led to the milestone of getting son Fox to eat his vegetables. After Superstorm Sandy, Platt faced a much greater challenge: Two feet of water flooded the lower level and the garage. He decided to redesign the space to incorporate a his-and-hers bedroom for the children—the girls’ side painted lavender and Fox’s side blue—plus a master suite that looks onto the water through a smartly integrated garage door, now a “wall” of windows. “I said to my curtain guy, ‘Bring something interesting that we can use to cover the metal portions on the garage door,’” recounts Platt. A decorative sailor’s rope did the trick, a smart grace note for this unerringly hip abode above the water.

A version of this article appeared in the September/October 2014 issue of Hamptons Cottages & Gardens with the headline: Exactly Platt.