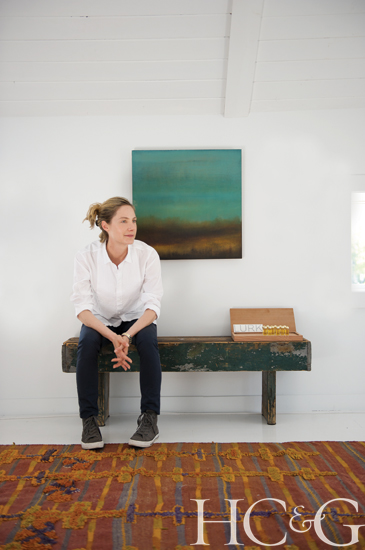 Anne Sanford is a study in contradictions. A self-confessed “beauty product junkie,” she is fresh-faced and winsomely natural. Her hand-crafted, essential oil–based perfumes are mysteriously seductive, yet they’re packaged in simple glass vials coded with a series of letters and numbers instead of lofty titles suggesting romance and allure. Even the name of her product line, Lurk, is subject to murky interpretation. “A fragrance should be ‘lurky,’” Sanford explains. “Not in a negative, creepy way, but so that it’s not screaming, broadcasting, or taking over a space. Long story short, I want clients to start with their own blank canvas, open a bottle, and experience whatever’s going to happen.”

Hexane- and pesticide-free, each of Lurk’s five scents includes hand-blended essential oils in a base of organic jojoba with no chemical preservatives, stabilizers, or additives. Their lab-experiment names come from Sanford’s formula notes, written while she was creating the fragrances. For instance, BS 003, her signature scent, is shorthand for the final approved solution of batch number 33, a perfume with bergamot and sandalwood notes. (Other scents include RSW 005, which smells of warm sandalwood and earthy rose with a crisp citrus finish, and PRJ V1, which contains layers of jasmine, rose, and fresh petitgrain.) 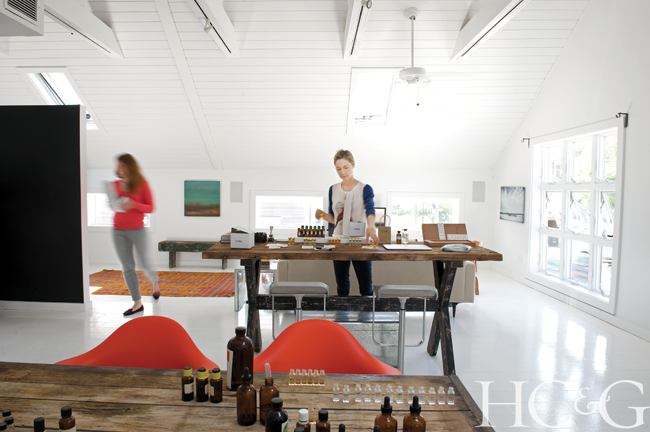 Sanford, who has both a studio space and a storefront in Sag Harbor, starts each fragrance with a jojoba base in a glass beaker, to which she adds essential oils a drop at a time with a small pipette (she carefully notes the number of drops and uses a scale to weigh the infused concentrate). Once complete, a batch will cure anywhere from two to three weeks, sometimes longer, before it is ready to be bottled and worn. Because the components are entirely organic, nature’s vagaries can create slight variations. Sanford’s tuberose oil, for instance, comes from flowers that are grown and picked by hand in Colombia, their scent extracted using the 19th-century French method of enfleurage. Once harvested, the petals are individually pressed into organic vegetable wax and allowed to diffuse over several days, after which the oil is rendered and skimmed by hand. Needless to say, no batch is ever the same. 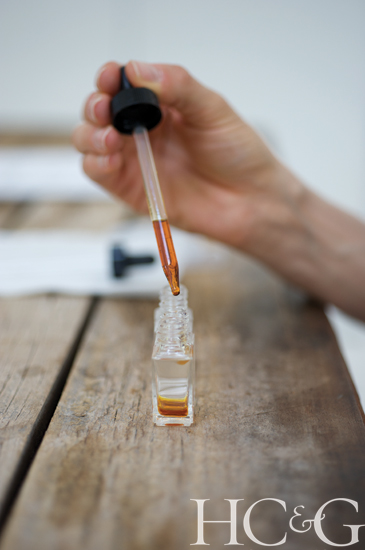 Long fascinated by eco-friendly products, Sanford ventured into the organic beauty business in 2001, opening a green apothecary in her home state of Florida. A few years later, she moved to Manhattan and worked on a number of brands before creating Lurk, which was initially based in SoHo. In June, she and her young son, James, moved to Sag Harbor, where she opened her brick-and-mortar shop on West Water Street. (Lurk’s fragrance line is also carried in more than 30 retail outlets nationwide, including Follain and Anthropologie.)

Despite her dedication to all things organic, though, what matters most for Sanford is how her customers connect with the scent. “I want you to love it because it’s beautiful,” she says. “Not because you’re making a political statement or a lifestyle decision. If you do, that’s cool. If you don’t, that’s awesome too. No judgments."

A version of this article appeared in the July 15, 2014 issue of Hamptons Cottages & Gardens with the headline: Scents and Sensibility.