Paris comes to the city in this New York apartment. Susannah Hunnewell and her decorator Fawn Galli, create the perfect home to start a new chapter for Hunnewell. 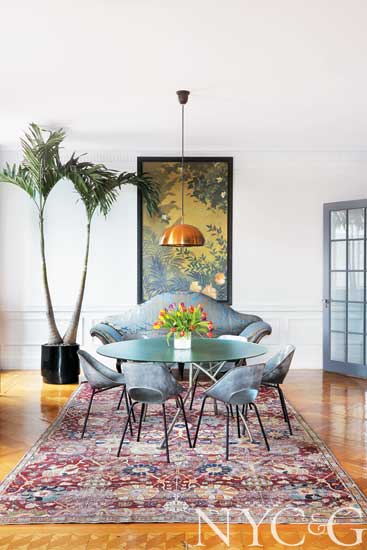 When Susannah Hunnewell and her family moved back to New York after a ten-year sojourn in Paris, she found her ideal new home at the historic Langham on Central Park West. Built between 1905 and 1907, the 13-story landmark was designed in the French Second Empire style and, like most residential buildings along the park, it has had its share of famous tenants, including Marilyn Monroe, Robert De Niro, Mia Farrow, and Mick Jagger. But for Hunnewell what mattered most were the views, the light, and enough bedrooms for her kids.

Once she had settled on the place, she called on her favorite interior designer, Fawn Galli, for help in transforming the “classic seven” into a family-friendly home. Galli, who lives in a Brooklyn townhouse with her architect husband and their two sons, had helped design Hunnewell’s Upper East Side apartment before her client’s move to Paris in 2000.

“Susannah wanted the interiors to reflect her personality,” says Galli. “She’s fun and eclectic, with an old-world streak. But she’s not self-conscious at all. She loves contemporary furniture, antiques, and fabrics with soul. And she was intent on making the place look like things had been collected over the years, rather than just trucked in by a designer.” 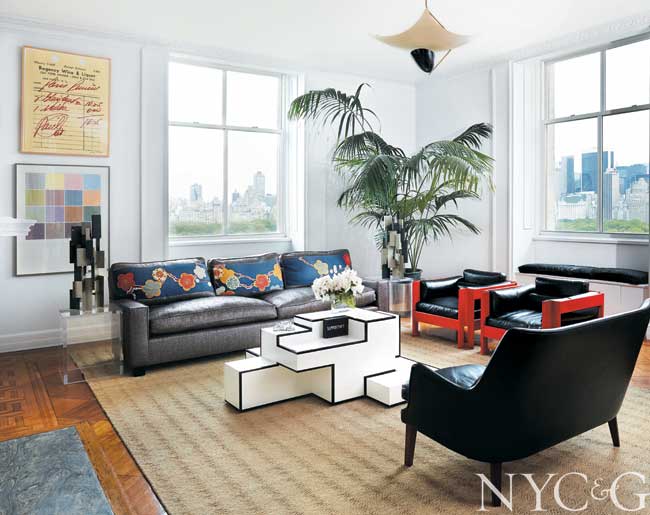 “I like pieces with character,” adds Hunnewell, “and I didn’t want the same things that everyone else had. But the danger when every piece has personality is that a room can start looking like it’s all over the place. That’s why I need Fawn.”

Galli kept the public rooms mostly neutral, and “then we went wild with color in the boys’ rooms,” she says. When Hunnewell, who is an editor at The Paris Review, and her husband, an investment banker, moved to the City of Light, they had one son. They returned to New York with three. Nico, 15, has twin beds in his room, and his brothers—Otto, 11, and Cosimo, 9—have bunk beds in theirs.

The furniture throughout the apartment has, in fact, been accumulated over the years, including pieces from the old East Side apartment that had been in storage. Others were bought in France, mostly at flea markets, which Hunnewell, who grew up in Paris, frequently haunted. And there are new furnishings bought in New York showrooms and auction houses too. 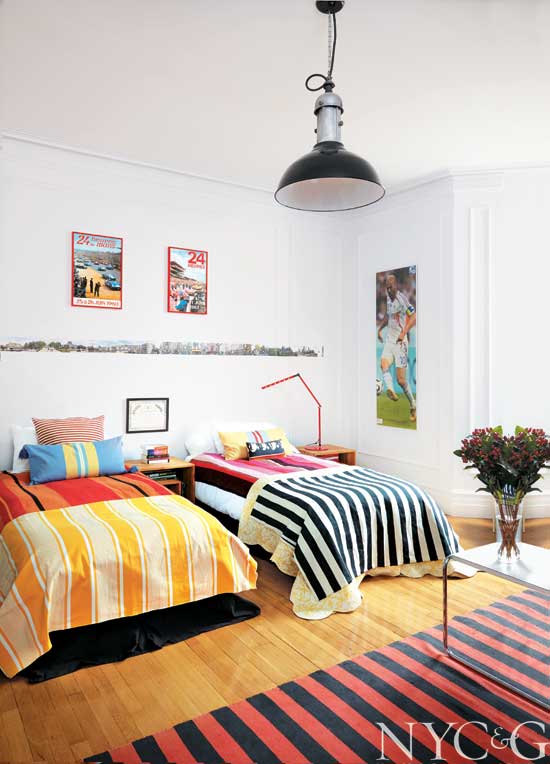 The living room alone is a United Nations of furniture and accessories. Galli gave Hunnewell’s old sofa a new lease on life with cushion covers made with swaths of antique obi silk. There are two mid-20th-century Italian club chairs, a Danish modern settee, and a contemporary rug from Colombia. The multilevel coffee table is by Brooklyn-based sculptor Courtney Smith.

The dining room is a celebration of Hunnewell’s love of les puces, the Parisian flea markets. That’s where she found her 18th-century Venetian sofa, her vintage Philippe Starck table, and copper light fixture. The aluminum chairs, designed in 1954 by Pierre Guariche, came from “a random street market.”

To tie Hunnewell’s diverse pieces together, “I tried to find things with an edge,” says Galli. Rugs throughout the apartment anchor the decor, from the dining room’s antique Persian, bought at Sotheby’s, to the shockingly bright chartreuse carpet in the paneled library and master bedroom. The living room rug, which Galli describes as “an urban take on sisal,” is in fact woven of nylon with aluminum threads running through it.

Most of the fabrics in the boys’ rooms come from France, including the brightly striped throws. “It turns out I’m a fabric hoarder,” says Hunnewell, who admits she can’t go into the Marché Saint-Pierre in Montmartre, a five-story building filled with textiles, without buying something. She shipped home boxes of brightly striped fabrics, traditional Basque hand towels, even old linen sheets, which she is currently using as curtains in the family’s Connecticut country house. 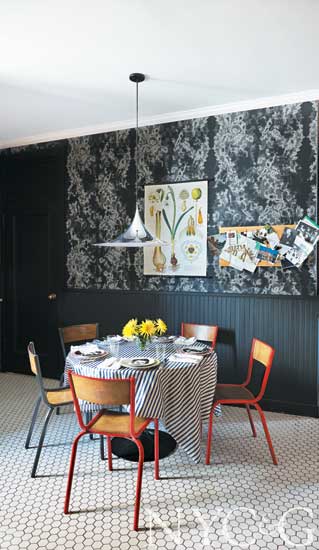 But while Hunnewell likes color, she’s also fond of black, which is now the color of the library ceiling and the powder room that Galli thought would be the perfect spot for a patterned wallpaper. “Let’s paint it black,” said her client with her usual energy and enthusiasm. The kitchen got the patterned wallpaper instead, though it, too, is black. “That wallpaper is one of my favorite things in the apartment,” says Hunnewell, who was looking for something vintage that spoke to the era of the building. “Fawn suggested a Trove wallpaper with a print of old lace,” she remembers. “I was terrified, but it’s perfect. It refers to the period, yet it’s modern.”

Galli painted all the rooms in warm shades of gray, giving the foyer the darkest hue. “We decided to keep the entry intimate,” she says, “and to keep the drama for the other rooms. That way, the living and dining rooms look much brighter and
bigger by comparison.”

“Fawn is all about drama,” Hunnewell says, “and that’s what I adore about her. She brought me further than I would have dared to go myself. I love having all these things around us that represent where we used to live. I love
having them as a part of our new life.”