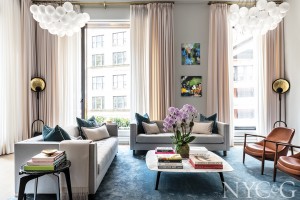 One of John Gomes’s duties as a top broker at Douglas Elliman Real Estate is connecting his developer clients with interior designers. But just when he thought he knew every decorator in town, one of his clients introduced him to a designer he hadn’t ever met: Australian native Paris Forino, who moved to New York in 2003 and founded her firm in 2012 (and was named an NYC&G Rising Star in 2016). “My jaw dropped when I first saw her work,” Gomes recalls. “It was a look I hadn’t seen before—and I’ve done 65 residential development projects in my career, so I’ve seen it all. It’s the perfect modern mix, with historical references.”

Forino has since become Gomes’s go-to for both large-scale jobs and even his own homes, including the Tribeca maisonette featured on these pages. “I hadn’t even been looking for a new place,” recounts Gomes, who was marketing the pad, along with other units, in a former manufacturing building being converted by BKSK Architects and Thomas Juul-Hansen. “I was trying so hard to sell this particular apartment that I ended up buying it myself! The space was still pretty raw at the time, so people were having trouble visualizing what it could be.”

Fortuitously, Forino saw what Gomes did and wasted no time devising a scheme for the 3,000-square-foot three-bedroom corner unit, which she describes as “clean, fresh, elegant, and refined, with statement pieces and pops of pattern and jewel tones.” Only a few minor structural and cosmetic changes were necessary, including bumping up the ceiling height to 15 feet in certain areas and erecting a wall between the front door and the great room, in order to create a proper entry complete with a fireplace and a wall of bookshelves. 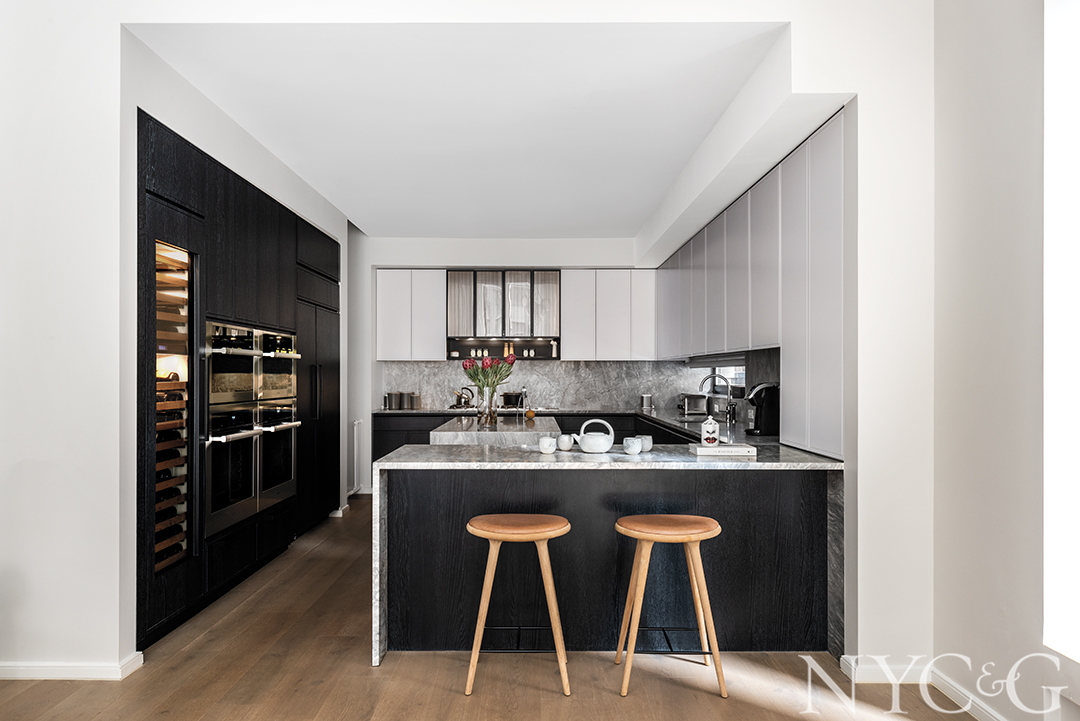 Forino was mostly concerned with finding the right blend of high-quality furnishings and textiles to suit Gomes’s discerning taste. “He’s a total design head,” says Forino, “which is why it’s a pleasure to work with him. He has an excellent eye.” It might not come as a shock, then, that Gomes, the father of two-year-old twins, green-lighted hand-knotted silk and mohair rugs, white draperies that “kiss the floor,” and cashmere-upholstered walls. “John isn’t about practicality,” adds the designer, who initially took a skeptical approach to the idea of white silk carpeting in the nursery. “He didn’t want to compromise on style just to make things kid-friendly.”

Throughout the apartment, Forino paired sumptuous textures with wallpapers from Fornasetti and Pierre Frey, dramatic lighting (no fewer than four cloudlike fixtures from Apparatus illuminate the substantial great room), and streamlined furniture from contemporary showrooms such as Dmitriy & Co, Property, and Suite NY. Gracing the walls are bold art pieces by renowned talents including Alex Katz and Damien Hirst. “It’s a great joy to learn about art,” says Gomes, “and with Paris’s encouragement, I stepped it up.”

Things get even dreamier in the master bedroom, where Fornasetti’s Nuvolette wallpaper provides a serene backdrop for a luxurious cashmere-upholstered bed. “I could stare at those clouds forever,” Gomes says of the pattern. (In fact, he meditates facing the wall twice daily.) “My bedroom is one of the most magical spaces I’ve ever been in. My life is hectic, so I needed a place to go where I could decompress. I needed a safe haven.”