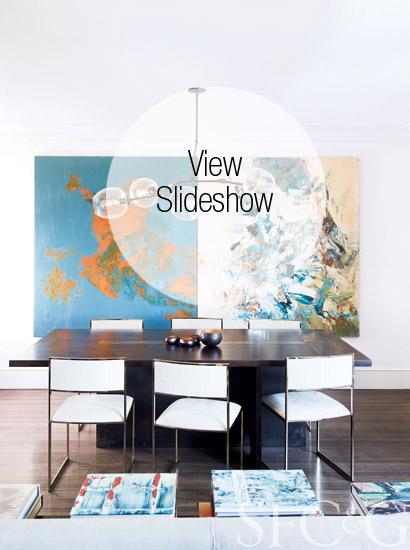 One week before San Francisco’s Bay Lights project went live, gallery owner Lisa Dolby Chadwick and her partner, Ian Schmidt, hosted a fundraiser in their home to benefit the hugely popular Bay Bridge art installation. In attendance was Leo Villareal, creator of the work composed of 25,000 LED lights, who thrilled the guests when he switched on the artwork via his computer. “Everyone gasped,” recalls Dolby Chadwick, whose Russian Hill perch provided the perfect vantage point. “We were all gathered in what we call ‘the view room’ for the magic moment.”

Even without a sneak preview of a seminal artwork, the top floor of the couple’s nine split-level home, with its panoramic views of the Transamerica Pyramid, the Presidio and the Golden Gate Bridge, is an enchanted place to be. But in 2008, the decision to purchase the property—at that time a peeling pink 1913 stucco structure with a warren of rooms Dolby Chadwick likens to the Winchester Mystery House—required real creative vision.

Her first call was to interior designer and best friend Kem Theilig, founder of In:Site Design Build Associates. Theilig designed the gallerist’s first art space 18 years ago, as well as her current gallery at 210 Post, so designing her house was a natural extension of their relationship. “I know her and her artists, and love her eye,” says Theilig, whose mission was to create a setting for the exceptional art.

But before they could think about hanging a single work from the extensive collection, the floor plan needed to be completely revamped, furnishings purchased and art-ready walls created, all in a scant seven months. “We re-imagined the entire structure by opening up every wall possible to give the house room to breathe and bask in the gorgeous San Francisco light,” says Theilig, whose list of renovations included moving the kitchen up two levels where it replaced two bedrooms and a hallway, crafting a master bedroom out of the old library, and removing walls wherever possible to open the house to bridge-to-bridge views.

As in most homes, the kitchen is the central gathering spot. But according to the homeowner, when she entertains, it’s hard for people to stay put. “This house just keeps unfolding and it draws people up and through it,” she says. Guests inevitably gravitate to the view room, where she favors setting up dinner parties with pillows on the floor and the city lights twinkling around them.

But the soul of the home is the art, a collection 23 years in the making that began with the purchase of a $900 Christopher Brown print that nearly broke the bank. “I could barely pay my rent, but I just had to have it,” recalls Dolby Chadwick. The collection now includes works by such contemporary art luminaries as Terry St. John, Ann Gale and Stephen De Staebler (she co-organized De Staebler’s career retrospective exhibition for the de Young Museum in 2012). Hung with her expert eye, certain pieces, like the 120-inch-long John DiPaolo displayed in the dining room, command an entire wall, while other smaller works are assembled salon-style in the top-floor lounge. A nude by Alex Kanevsky graces the top of the stairs; the gallerist notes the piece embodies the combination of beauty and sadness that typically draws her in. “Collecting isn’t about decoration,” she says. “Rather, it’s like a mirror reflecting what moves you.”

Holding true to her philosophy of encouraging clients to buy what they love, her own collection is incredibly personal, and she can recall the circumstance of each purchase. “Every single piece has a story and reminds me of a certain time in my life,” she says. “As I walk through the house, each one takes me to a different place.”

A version of this article appeared in the October/November 2014 issue of San Francisco & Gardens with the headline: Art House.