The latest status symbol to take advantage of the East End's ocean, sound, and bays? The mega yacht. Discover these floating Hamptons palaces and see which top designers are moving into town. 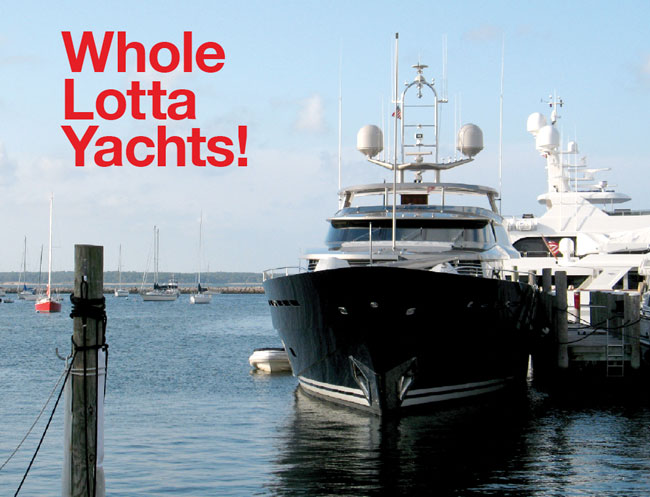 
Some of the most valuable Hamptons real estate has nothing to do with land. The latest status symbol to take advantage of the East End’s ocean, sound, and bays? The mega yacht. These floating palaces have their own bells and whistles in addition to their nautical bells and whistles. It’s common to see three or four deck levels, including a beach club lounge at sea level, which is akin to an infinity-edge pool. It’s also about the toys—from Jet Skis to diving equipment to world-class fishing equipment—and room for your own car, helicopter, and mini submarine.

However, due to U.S. Coast Guard regulations, no matter how big the boat, you cannot legally have more than 12 overnight guests. For that reason, the golden number of staterooms is six, with additional room for 10 crew members. Mega-yacht decorators are gaining the same fame as their land-bound counterparts. Superstar yacht designers, like Redman Whiteley Dixon, create dream boats such as the newly launched 257-foot Hampshire II, which has a 12-seat cinema, dining room with a real fireplace, a wine cellar with underwater viewing, a basketball court, and diving boards on all decks. 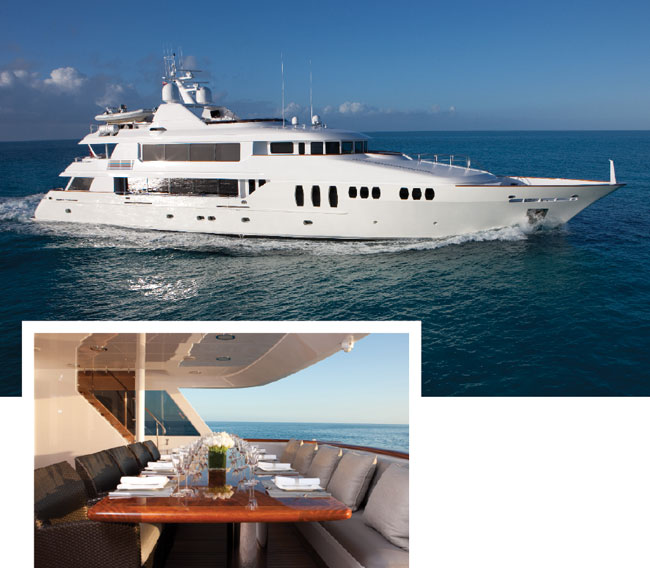 “The obvious benefit of living on a yacht is that you can enjoy it here in the Hamptons or zip to Nantucket,” says Danielle Barton of Bruce Tait & Associates in Sag Harbor, which handles sales and charters of luxury yachts. It also allows you to travel without people knowing who you are or where you’re going. Steven Spielberg reportedly chartered a 130-foot yacht in Sag Harbor when he was negotiating about DreamWorks and didn’t want anyone to know his movements or meeting schedule.

Just as you can rent out your Meadow Lane beach house, you can charter out your luxury yacht. Many yacht owners simply send their floating palaces south for the winter to find a port in Palm Beach or the Caribbean. Yacht brokers, unlike most real estate agents, don’t just deal locally but globally, so your chartering agent arranges for your yacht to be rented out in all the resort markets. Bruce Tait represents the 150-foot Carpe Diem II, which charters at $175,000 per week with five lavish cabins and a top-deck Jacuzzi for eight.

The most expensive real-estate transaction in the Hamptons cost Ron Baron $103 million, but that was chump change compared to the reported $1 billion price tag of Russian gazillionaire Roman Abramovich’s 557-foot luxury motor yacht Eclipse, which comes complete with bullet-proof glass and an anti-paparazzi laser shield.

Feeling the lure of the open sea? You could forgo your oceanfront home and buy Slojo, a 156-foot Delta Marine motor yacht that’s outfitted to go around the world, for $27.5 million through Bruce Tait & Associates. The yacht comes with a sky lounge, inlaid walnut bar, sharkskin-topped game table, his-and-hers master bathroom with double walk-in shower, gourmet kitchen, spa pool, and outdoor gym. It’s even designed to be environmentally friendly and makes all of its on-board drinking water. 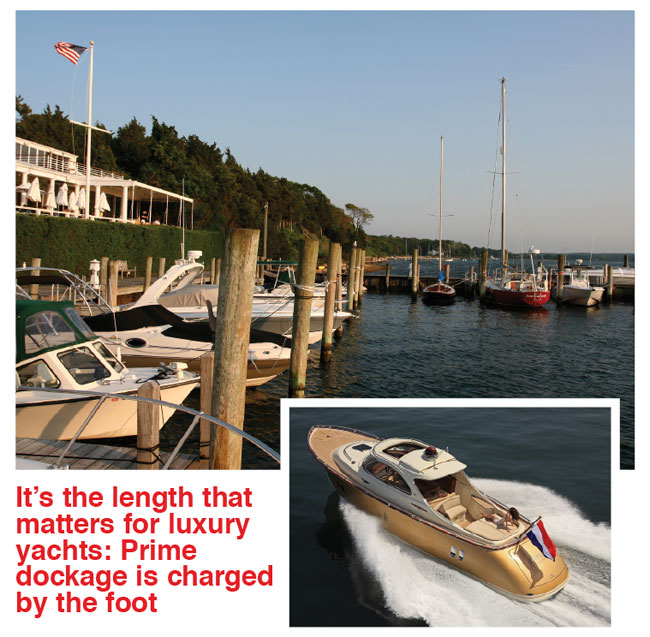 Budget closer to a million rather than a billion? Consider a new Zeelander for a mere $1.4 million. The 44-foot, 14-ton motor yacht is designed for a smooth ride in stormy seas, with special sound and vibration engineering. The design includes sumptuous leathers, exotic granites, stainless steel, and a hydraulic swim platform. Richard Callaghan of MarineMax Yacht Group brokers the boat out of East Hampton Point and Fort Lauderdale.

While land-bound homes are measured in square footage, it’s the length that matters for luxury yachts, not only in terms of their staterooms, but because prime dockage is charged by the foot. Dockage fees average $6 a foot per day if the boat is transient. On a 200-foot yacht, a summer dock rental could run upwards of $1,200 a day.

But you have to act fast: Prime seasonal dockage sells out quickly—at East Hampton Point Resort ($200 a foot for the season), for instance, they can go as early as January 15. But with that luxury docking, you get to enjoy the resort’s tennis, pool, restaurant, gym, boaters lounge, ship store, and beach shuttle. General Manager Michael Capoferri sees boaters from Palm Beach, Greenwich, Newport, and St. Barth: “It’s a totally different lifestyle and approach to summer where cars are rarely involved,” he says. Speaking of East Hampton Point Resort, you can go ahead and buy the whole place, if you want: It’s listed for $30 million, reduced from an initial $50 million ask, with Brown Harris Stevens.

The Montauk Yacht Club Resort & Marina, built by famed Miami Beach developer Carl Fisher in 1928, has catered to the upper crust for more than 80 years. (Original members included Astors, Morgans, Whitneys, and Vanderbilts.) To attract the grand pleasure yachts of the day, Fisher dug a deep channel between freshwater Lake Montauk into Gardiners Bay, creating what was then the world’s largest private harbor. Some of the larger mega yachts make this their summer home to take advantage of the 35-acre resort and its restaurants, bars, spa, salon, fitness center, private beach, tennis, and three swimming pools, along with the 232-slip full-service marina, which can berth vessels up to 275 feet. It can also accommodate floating condominiums, smaller boats for seasonal residents who rent out their houses for the summer and stay at the resort at a reduced seasonal dockage fee. 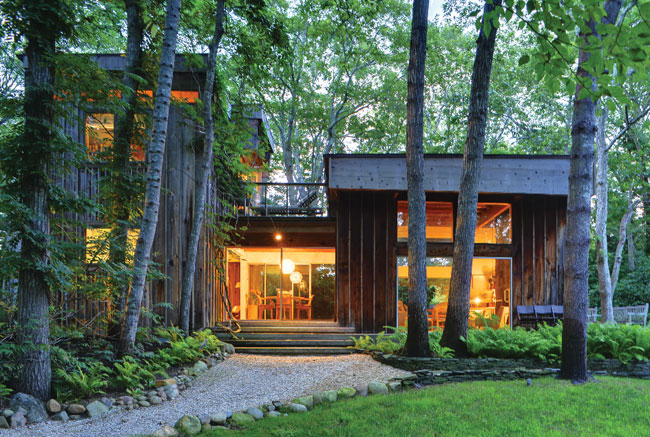 
Fashion houses
Bold-faced names in the design world know the best accessory you can have is a house in the Hamptons. Whether you’re looking to recharge creative batteries, socialize with clients, or invest couture cash, an East End second home is always fashion forward.

With the purchase of a new construction in Bridgehampton for $7.95 million, Tamara Mellon of Jimmy Choo joins other top fashion designers here: Donna Karan in East Hampton, Isaac Mizrahi in Bridgehampton, Elie Tahari in Sagaponack, Nicole Miller and Lisa Perry in North Haven, and Cynthia Rowley in Montauk. Tory Burch recently finished her major reno on the 1929 brick Georgian she bought for $16 million in 2010, while Calvin Klein’s Meadow Lane modern is still under construction.

Lawyer to the fashion stars Doug Hand has his Harry Bates–designed mid-century modern on a private half acre in East Hampton listed with Catherine Debackere of Sotheby’s for $795,000. At his firm Hand, Baldachin, Amburgey LLP, he reps clients such as Phillip Lim, Rowley, Jonathan Adler, Rag & Bone, Rodarte, Victor Costa, Yigal Azrouël, and Monique Péan. When he went looking for a Hamptons home in 2008, he wanted something with artistic flair.

“Everything else I’d looked at was just a house,” says Hand. “To have provenance and a design aesthetic available for under a million was the perfect combination. I just love mid-century-modern design, and Harry Bates was a pioneer. That period has a specific legacy yet still looks fresh. And it’s liberating [when coming] from the city to have so much glass. This is the perfect platform for relaxation and entertaining.” Hand, who grew up surfing in California, uses the Hampton Waters Beach Enclave private beach access for paddle boarding, and its community dock is convenient when he wants his friends to pick him up via boat. 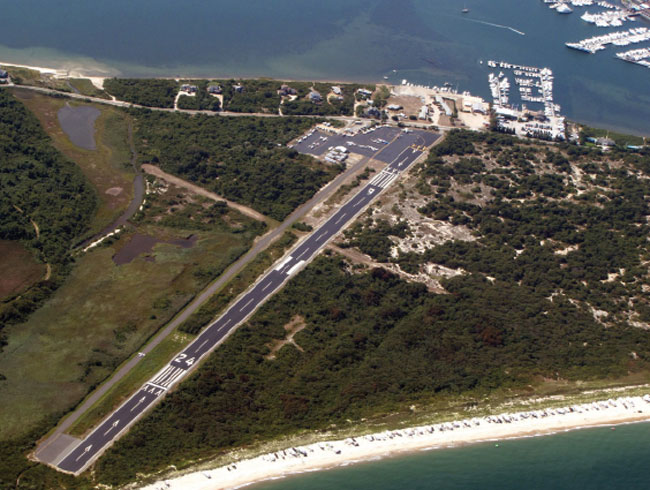 
He can pop in to see clients’ retail boutiques—like Steven Alan, Cynthia Rowley, or Yigal Azrouël—in action. “It’s nice to see them outside of the city and the attorney/client box,” notes Hand. He also sees the Hamptons as a muse for his clients, such as designer Luis Fernandez and his brand Number:Lab. “He’s incredibly influenced by lifestyle and athletics out here, from sailing to biking,” says Hand. “He created a line where performance fabric meets tailoring. I’ll often see a client’s whole season designed around a Hamptons element, such as horse country.”

A transformative eye can also turn a home-fashion “don’t” into a home-fashion “do.” The owner of a Sag Harbor home-design store took a 1980s eyesore with pink tile floors and orange Formica kitchen and turned it into a chic waterfront oasis. The 5,600-square-foot, seven-bedroom, five-bathroom house on 126 feet of waterfront on Northwest Harbor has its own beach plus an indoor heated gunite pool. The $6.4 million property was the Camp St. Regis, a children’s summer camp, for 50 years, according to listing agent Lori Barbaria of Prudential Douglas Elliman.

Is the ultimate fashion statement having your own private runway with a water view? We’re not talking catwalks. Now that the Montauk Airport and its 37 subdividable acres are up for grabs, would Montaukers like Ralph Lauren or Mickey Drexler like their own helipad? It’s listed for $18 million with Paul Brennan and Ronald White of Prudential Douglas Elliman. 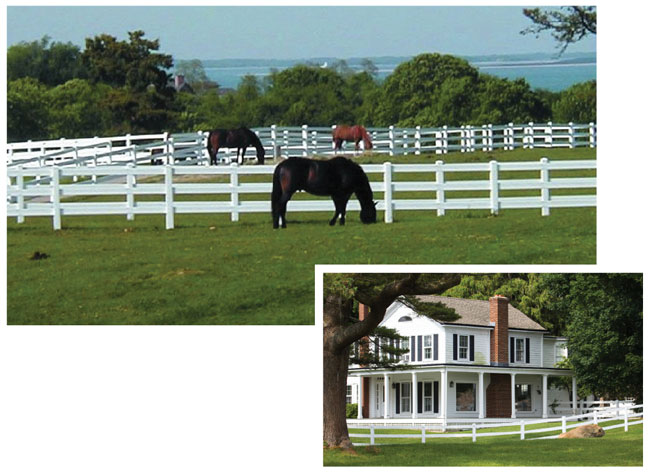 What started as an afternoon pony ride has grown into, literally, buying the farm. Madonna bought Kelly Klein’s farm in Bridgehampton for her steeds, and Matt Lauer recently applied for approval to create an equestrian compound with barn space for 36 horses on his 40-acre parcel in Water Mill.

One of the last large horse farms with a view of the ocean has sold for $25 million. The Topping farm in Wainscott, which had been in the family since 1846, was listed at $30 million. The 14 acres on Wainscott Pond include two residences, rolling pastures, and a 21-stall barn. (The original compound encompassed four lots totaling 18.4 acres, listed at $57 million; two 1.9-acre building lots sold for $4.5 million each, and houses are being built on them.) Fresh off the sale of the Topping farm, Dana Trotter of Sotheby’s International Realty now has her next exclusive, on Three Ponds Farm in Bridgehampton, listed at $60 million (reduced from its original $75 million ask). The 60-acre property features a 20,000-square-foot main residence, 18-hole Rees Jones–designed golf course, grass tennis, outbuildings, pool with pavilion, and gardens galore.

For those looking for a state-of-the-art waterfront horse farm, Gary DePersia and Penelope Moore of Corcoran have the listing for the 36-acre Paard Hill estate on Shelter Island, with views of Gardiners Bay and Coecles Harbor, for $7.95 million. It includes open rings and pastures, a heated indoor arena, modern 23-stall barn, riding trails, office, outbuildings, and 1880s farmhouse.