From the Desk of Scott Fellows 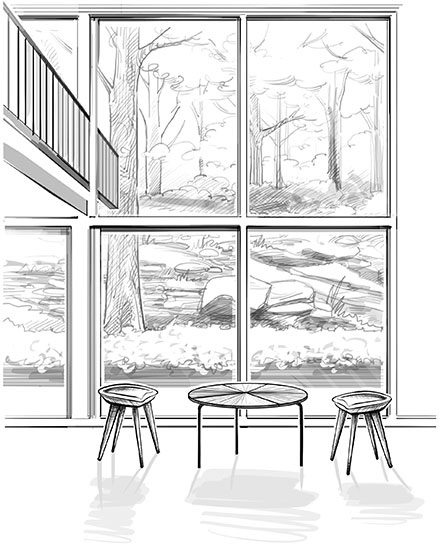 We never planned to be New Englanders. We were New Yorkers through and through. I couldn’t wait to move to the City after growing up in a small town in western New York State. And Craig Bassam, my partner, made his way to New York from his native Australia. We had the quintessential New York life—including an apartment with a wraparound terrace in West Chelsea.

Then one April Saturday in the late ’90s, we decided to take a drive to New Canaan to explore its modern architecture. It was a gorgeous spring day, and the trees were just beginning to bud. We stopped in town for a wonderful lunch and chatted with the locals about the best streets to see some of the moderns. We were pointed to Ponus Ridge and the Philip Johnson Glass House and told about the secret side street where you could catch a glimpse. At the time, Johnson was still in residence. We were also instructed to drive down Chichester, which featured multiple examples of modern architecture by the likes of John Black Lee and Hugh Smallen.

Enamored, we stopped into a real estate office where an agent tepidly suggested that moderns were so unloved that they were unsellable. But he did allow us to flip through the office’s listing book, which featured a few photos of a dilapidated modern from 1956 that happened to be located on Ponus Ridge! At first, we could only take a peek from the outside, but we were both captivated and spent the rest of the afternoon examining every detail. On the drive back to the City, we kept discussing how sad it was that such a great piece of architecture was left discarded and unloved. Somebody should save it, we thought, not seriously thinking that someone could be us. On Monday, we called up the agent and made an offer, knowing that the Chelsea apartment would have to be sold first.

And we never looked back. We came to Connecticut for the innovative architecture and the nature—a place that would satisfy our own creative and aesthetic needs. In fact it was that first house, the Willis Mills House, that inspired us to create BassamFellows, our own brand. We wanted contemporary furniture that would look right in the house—pieces that would hold their own against the powerful nature outside the double-height glass walls. Furniture that would be as rigorous, elegant and precise as the modern architecture. We focused on natural materials and finishes and made everything using highly skilled craftsmen. We called our lifestyle philosophy Craftsman Modern.

New Canaan’s world-class architecture, design and art continues to inspire us. From the acclaimed Japanese architect Kengo Kuma’s first architectural project in the U.S. (a recent addition to a residence on Chichester) to Pritzker-prize winning architects SAANA’s new church and community center currently under construction, to the Philip Johnson Glass House’s renewed focus on contemporary art and its role encouraging conversations with artists, architects and other creative minds. And most of all, we are inspired by our own house—a Philip Johnson–designed house directly opposite the Glass House. On Ponus Ridge, of course.