Gardens For A Beautiful America

A cache of vintage painted glass slides, based on the work of early-20th-century photographer Frances Benjamin Johnston, are collected in historian Sam Watters’s new book, Gardens for a Beautiful America, 1895–1935 (Acanthus). They provide the key to hist 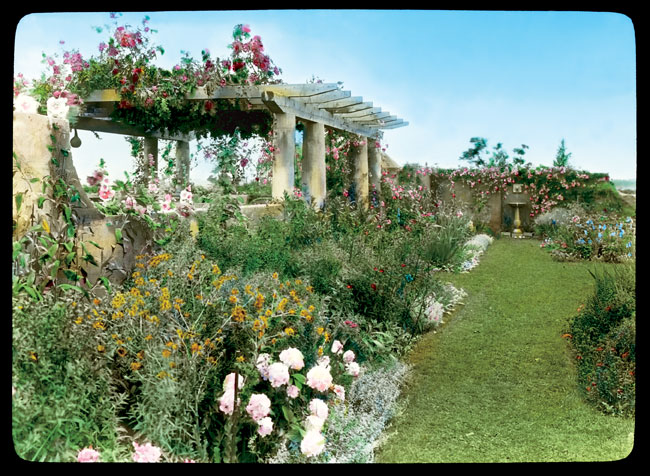 Lush plantings were a signature of garden designer Anna Gilman Hill, a founding member of the East Hampton Garden Club. Hill and her husband, Robert Carmer Hill, bought Grey Gardens in 1913, long before it became the infamous Beale residence chronicled in the 1975 documentary film by the Maysles brothers. In 1914, the trademark gray stucco–walled garden was built after a storm destroyed the original garden. Frances Benjamin Johnston photographed Grey Gardens in stages, between 1914 and 1917. As befits the name of the house, the borders were planted with many gray-leaved annuals and perennials. The rose pergola’s gray cedar trellis, seen here, supported climbing roses and shaded a seating area. 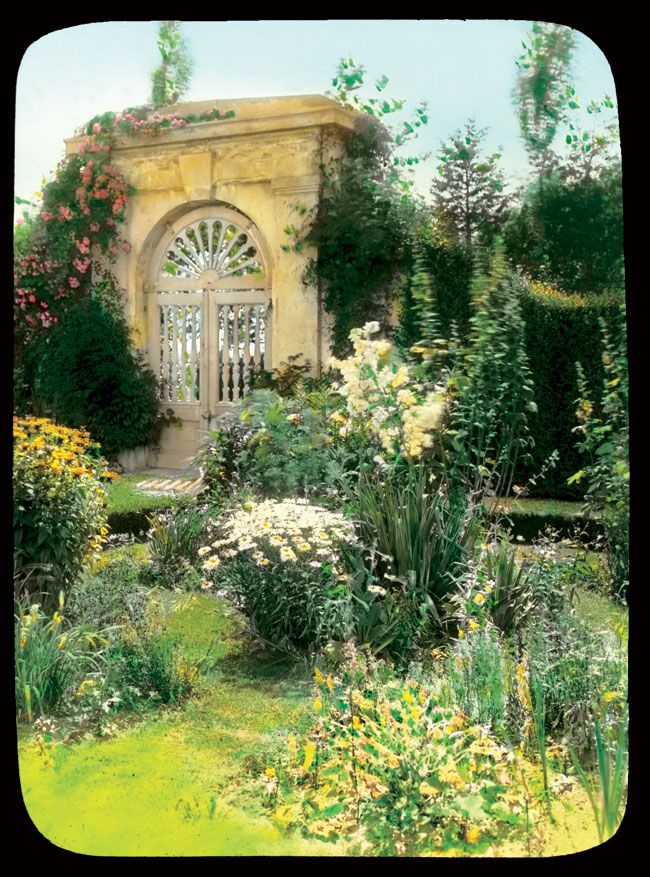 A 1914 photograph depicts the garden gate at Millefiori, the Coopers Neck Lane estate of Albert Barnes Boardman, a wealthy corporate lawyer. His wife, Georgina, led the charge to have Johnston document the gardens of the East End. Starting with Millefiori, Johnston photographed the area’s great estates and presented them in a series of highly acclaimed lectures across the country. This gate, reminiscent of a triumphal arch, was just one historic component of the circa-1910 house, a faithful copy of the Villa Medici designed by Hill & Stout. (Historicist designs such as this one were typical of the period.) The house was demolished in the 1960s, although its gates are still extant. 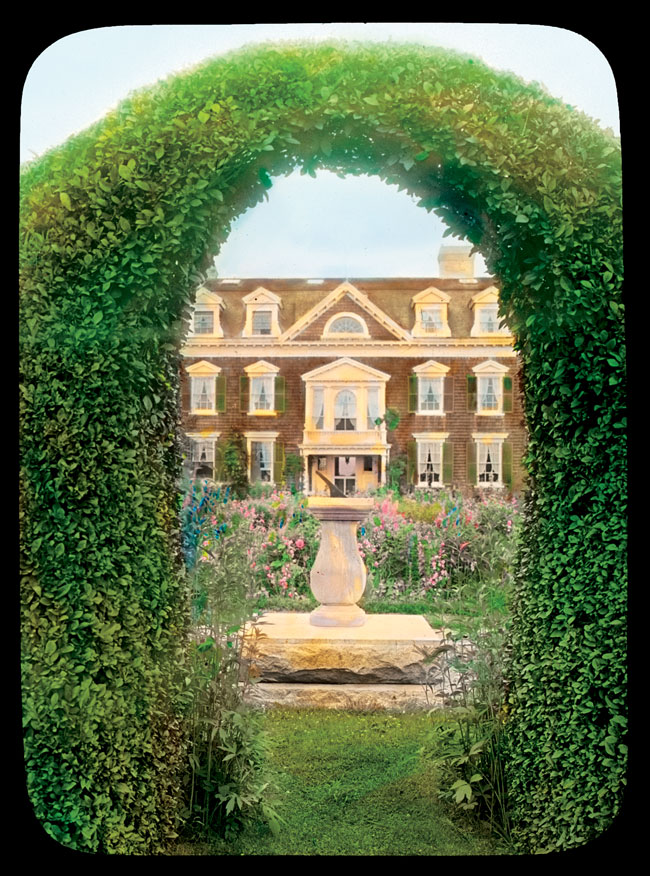 A privet hedge frames Claverack, a Dutch Revival estate originally built for Thomas Henry Barber and his wife, Harriet Townsend, a descendant of the van Rensselaer family—one of New York’s original Dutch families. Originally planned as a 20-acre estate (10 of them planted with potatoes), Claverack was designed in 1892 by Robert Henderson Robertson. The landscape was the only Frederick Law Olmsted project photographed by Johnston, whose circa-1915 view from one of the gardens to the house on Halsey Neck Lane exemplifies her creative vision. Not only is the house revealed in all its grandeur, but the natural archway also highlights an imposing sundial and stone base. 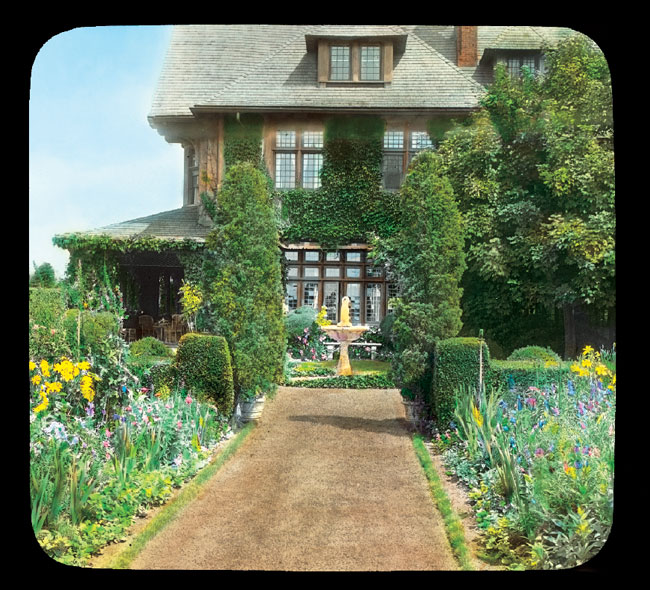 This Gin Lane garden, adjacent to the Bathing Corporation of Southampton, was featured in Louise Shelton’s seminal book Beautiful Gardens in America (the title of Watters’s book is a play on this). Johnston’s photograph of the east terrace features lush English gardens and clipped hedges that complement the half-timbered Tudor-style house. Originally the residence of Dr. Peter Brown Wyckoff, Wooldon Manor was demolished in 1941 (its last owner was Edmund F. Lynch of Merrill Lynch). A later poolhouse and a brick wall are all that remain. 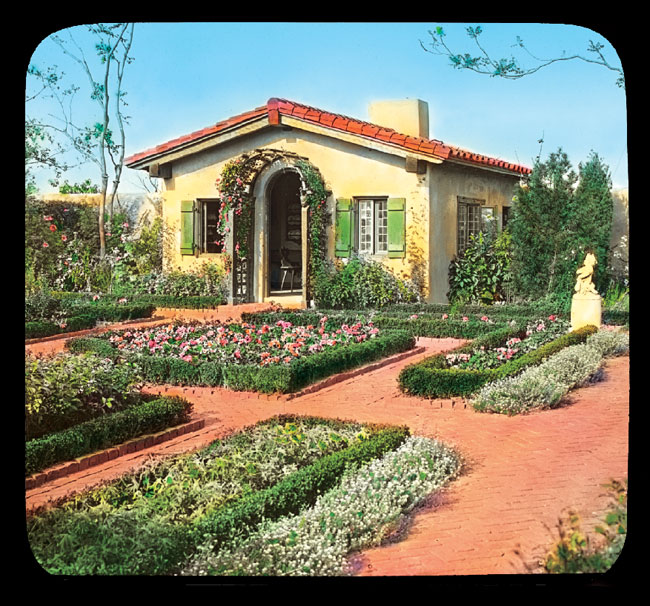 Although this boxwood-edged garden looks like a formal design, it was actually the children’s garden and playhouse at Black Point, the Southampton property owned by Colonel Henry Huttleston Rogers Jr., a Standard Oil heir. His daughter, Millicent Rogers, the socialite and legendary fashion icon, played in the brick-paved garden when she was a young child. Architects Walker and Gillette designed the circa-1914 main house and accessory buildings in the Italian Revival style. Black Point has since been demolished. 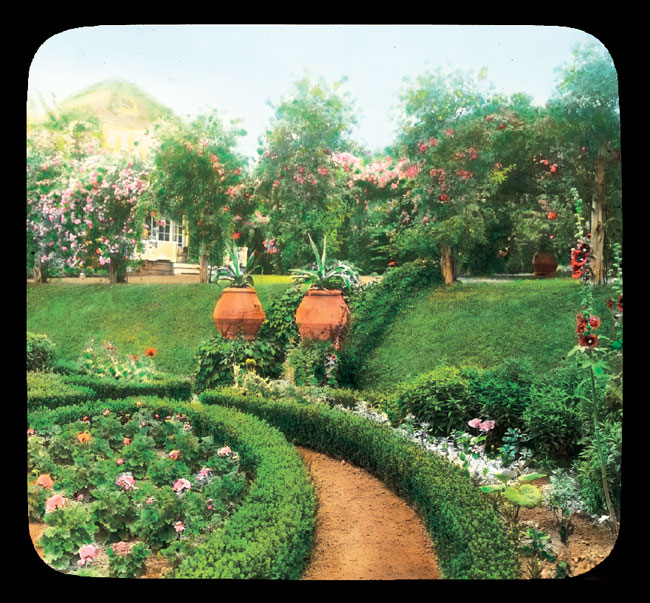 Photographed by Johnston in 1915, this sunken garden was a standout feature of the landscape built for artist Annie Mae Hedgeman at her home, The Steppingstones. Hedgeman’s mother, also an artist, was a founder of the Art Colony and helped bring William Merritt Chase to Southampton. The circular garden was surrounded by an arcade of climbing roses and featured such exotica as agaves planted in oversize terra-cotta olive jars, along with more typical geraniums, hollyhocks, and other annuals planted in a boxwood-lined parterre. 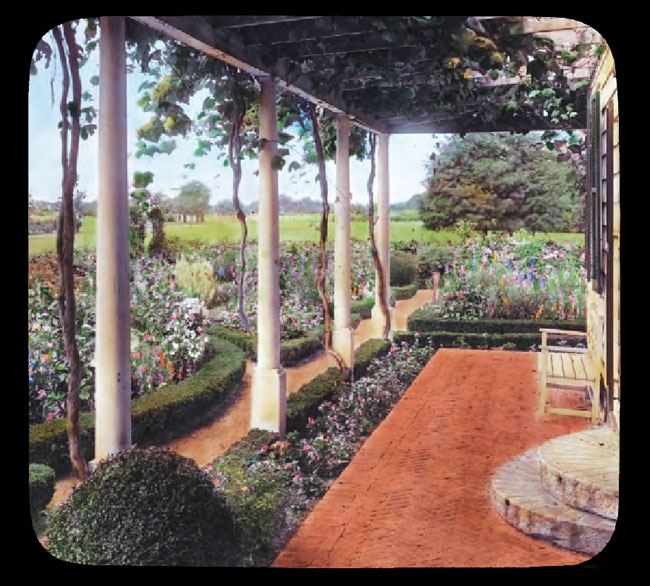 The Appletrees, the Southampton estate of Henry Eugene Coe, featured grand vistas, such as this 1914 view from the porch looking toward the gardens and fields. Coe enlarged the 19th-century farmhouse many times over in the Colonial Revival style.
In this photograph, Johnston places all the important elements of the property in context, simultaneously providing a suggestion of the house’s architecture, a view of the flower-packed garden, and the larger landscape beyond. 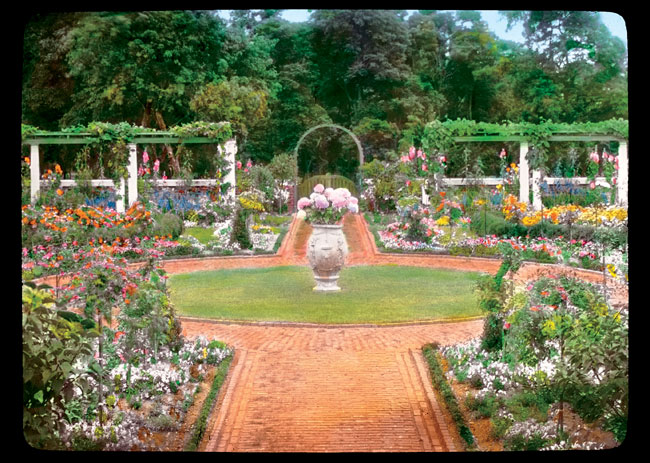 In 1915, Johnston captured the riot of color in the flower garden at Ballyshear, just two years after the 200-acre estate was designed by F. Burrall Hoffman Jr., the man responsible for the magnificent Villa Vizcaya in Coral Gables, Florida. Rose Standish Nichols and Annette Hoyt Flanders, among the first female landscape architects in America, were hired to design the grounds. The vine-covered pergola that encircles the garden was meant to provide not only structure, but also shade for viewing the garden in midday. Charles Blair McDonald, a prominent golf course designer whose credits include the National Golf Links, was the first occupant of Ballyshear, now a 35-acre property currently owned by New York City Mayor Michael Bloomberg.