Georgia on My Mind

Draw the curtain back on this beautiful ancient city and former member of the Soviet Union. See what Republic of Georgia has to offer to its travelers. 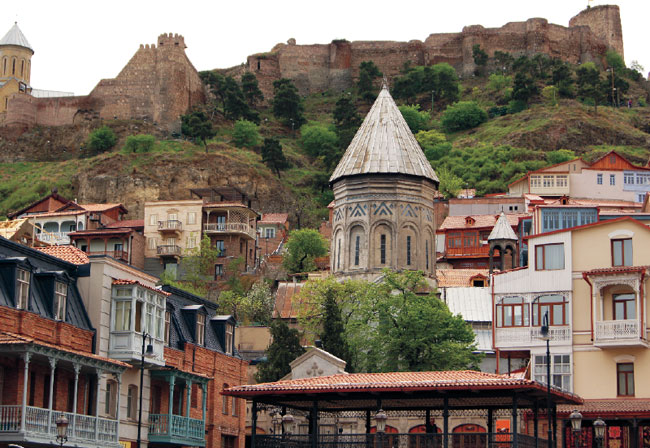 Cityscape Hillside homes flank the tower of an historic church in Old Tbilisi.

The ancient city’s indigenous buildings are found across the Bridge of Peace in Old Tbilisi, where three-story masonry houses with overhanging wooden balconies crowd the hillside, historic Gregorian basilicas crowned with pepper-pot roofs hold solemn chanted masses, and cobbled streets lead toward Rustaveli Avenue lined with modern monumental structures, including the former Parliament and a branch of the national museum. Parts of the old town have been converted into trendy shops and bars, such as the KGB cafe with its tongue-in-cheek sign, “Still watching you.”

But architectural riches are just a small part of this land, where mountains march down to the sea past valleys of vineyards and farms leading guidebooks to call it “one of the most beautiful countries on earth.” Nestled in the Caucasus mountain range, the remote medieval village of Ushguli, part of a UNESCO Heritage site, remains snow-covered virtually year round. Gudauri ski resort offers December–April skiing with hotel rooms priced at $25–$30 per day.

To the west, mountains frame the rocky beach of Batumi, a fashionable Black Sea resort town that has renovated its fanciful pastel buildings and added some ultramodern hotels. Lined with palm trees, a park along the beachfront incorporates a tennis club, a giant Ferris wheel and Alphabet Tower, bicycle rentals, fountains and a plot of land with a sign declaring it to be the future site of a Donald Trump hotel.

With claims to be the birthplace of wine, the increasingly sophisticated Kakheti wine region lures visitors to tours and tastings. Many family-run wineries incorporate little museums and overnight accommodations.

With a pro-Western government and minimal crime rate, plus inexpensive facilities (it’s hard to spend more than $150–$200 per night for a room in a first-class hotel or to spend more than $20 on a full dinner with wine), it literally pays to keep Georgia on your mind.

1. Soaking and getting a scrub massage in one of Tbilisi’s cave-like ancient, beehive-domed, hot-spring sulfur baths.
2. At Tbilisi’s Fine Arts Museum (museum.ge), the exquisite cross set with rubies and emeralds that is the only surviving personal relic of Queen Tamar of Georgia’s 12th-century Golden Age.
3. The manor house of poet Alexander Chavchavadze, with its filigree porch, park-like setting, collapsed chapel and the famous Tsinandali winery next door. 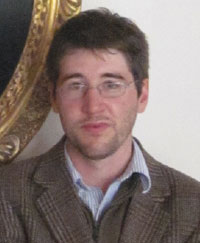 An expat from Washington State, Ryan Eyre teaches English at the Georgian Police Academy and is an editor at Tbilisi’s English language daily newspaper, The Messenger.

How did you happen to choose Georgia? I’ve traveled a lot around Europe, and a few years ago, I started reading about it and was fascinated—the history, the landscape—something about it grabbed me.

How were you received when you arrived here in 2011? Until the ’90s, there weren’t many people visiting Georgia, but now Westerners are very welcome. When they hear you’re American, they’re friendly; they want to talk.

What lingering traces of the Soviet era do you see here? Well, Stalin was born in Georgia, and the country still has a relationship with its “most famous son.” In Gori, there’s a huge Stalin Museum, with the mud and wood hut where he grew up and his bulletproof railway carriage. It’s a bizarre anachronism.

Which parts of the country have you been able to visit? Batumi is a popular seaside resort destination in this part of the world. Up in the high Caucasus, the scenery is stunning, and I go up to the ski areas—there are tremendous trails, and you can ski all day for under $20.

How is the food? There are delicious staples: eggplant dishes stuffed with walnuts; flaky cheese-stuffed “khachapuri” pastries. Shish kebab is popular and spicy “khinkali” dumplings. Bagrationi sparkling wines or a Chateau Mukhrani are inexpensive and perfectly good. Visitors should try Georgian mineral water: Borjomi and Nabeghlavi.

What are the drawbacks for travelers? People don’t queue up, they don’t respect lines. And pedestrians need to take care crossing streets: Drivers can be reckless and aggressive.

How do you lure friends to visit? You don’t need a visa to come here. The crime rate is low. I don’t feel threatened or unsafe. There are a wide variety of landscapes, from the seashore to subtropical to the mountains.
And it’s not overly developed and trammeled.