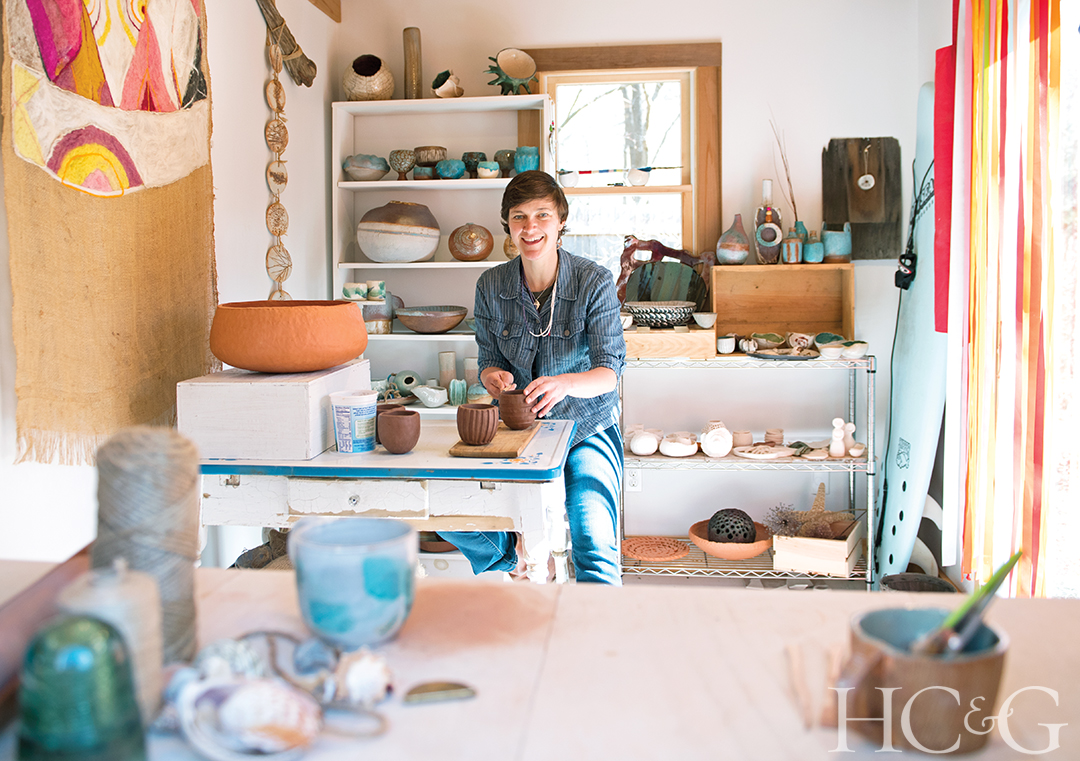 Combs, pencil tips, twine-wrapped wooden paddles, and seaweed are just a few of the items that Shelter Island–based ceramist Lora Lomuscio uses to produce the rough, intentionally imperfect patterns on her hand-crafted bowls, vases, and objets d’art. “The textures lend intrigue,” says Lomuscio, who also uses her fingers to make unusual imprints in the clay. “I like the surfaces to be a bit of a mystery.” 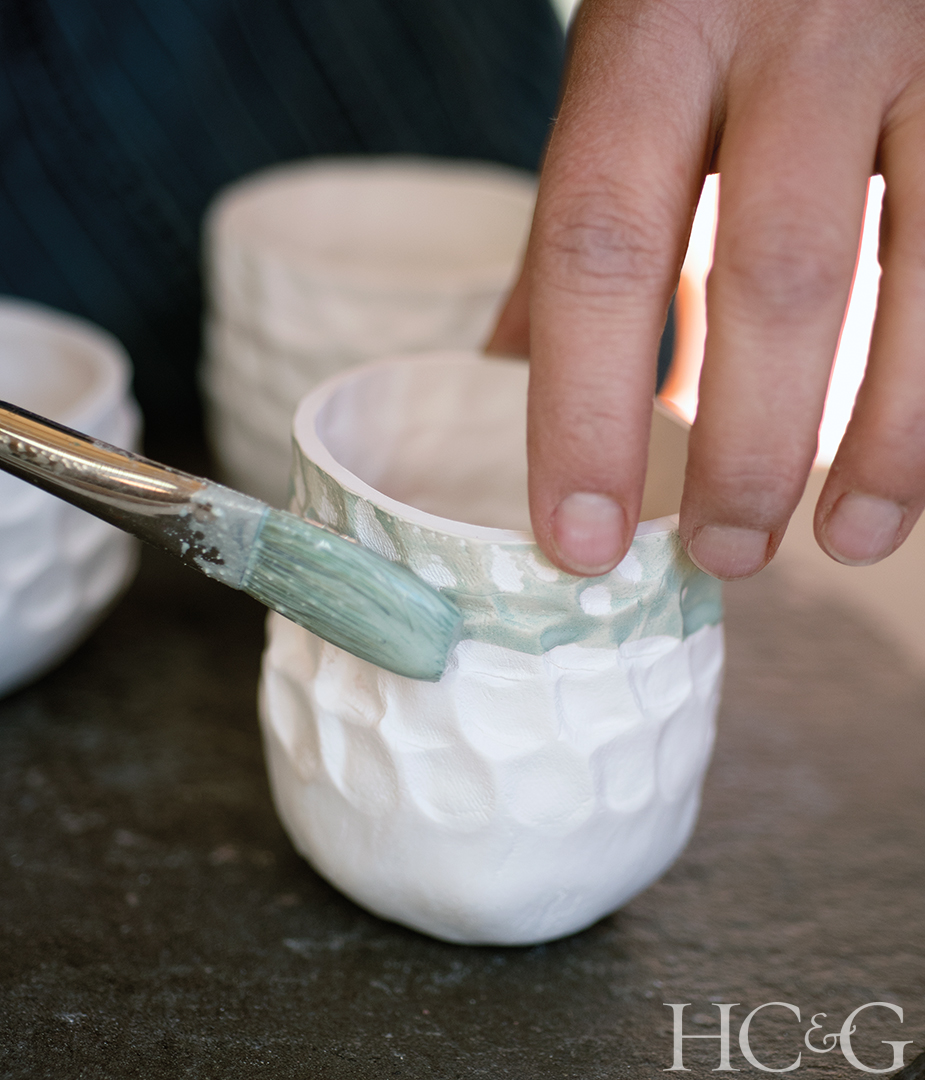 Lomuscio first became fascinated with ceramics in high school, but decided against pursuing studio art and earned a degree in art history at Vassar College instead. Upon graduating, she landed a job at a lighting showroom, which inspired her to get a master’s degree in industrial design from Pratt Institute. In 2006, after working for a decade as an architectural lighting designer, the New York native moved her family from Brooklyn to Shelter Island, where she had been vacationing since childhood. Eventually, she started taking pottery classes at Stony Brook University and joined the Clay Art Guild of the Hamptons in Water Mill. “Ceramics is just so me,” says Lomuscio, who has been selling her pieces, which she creates in a 125-square-foot studio on the grounds of her home, since 2015. “When I came back to the craft after not doing it since high school, I knew it was where I wanted to be.” 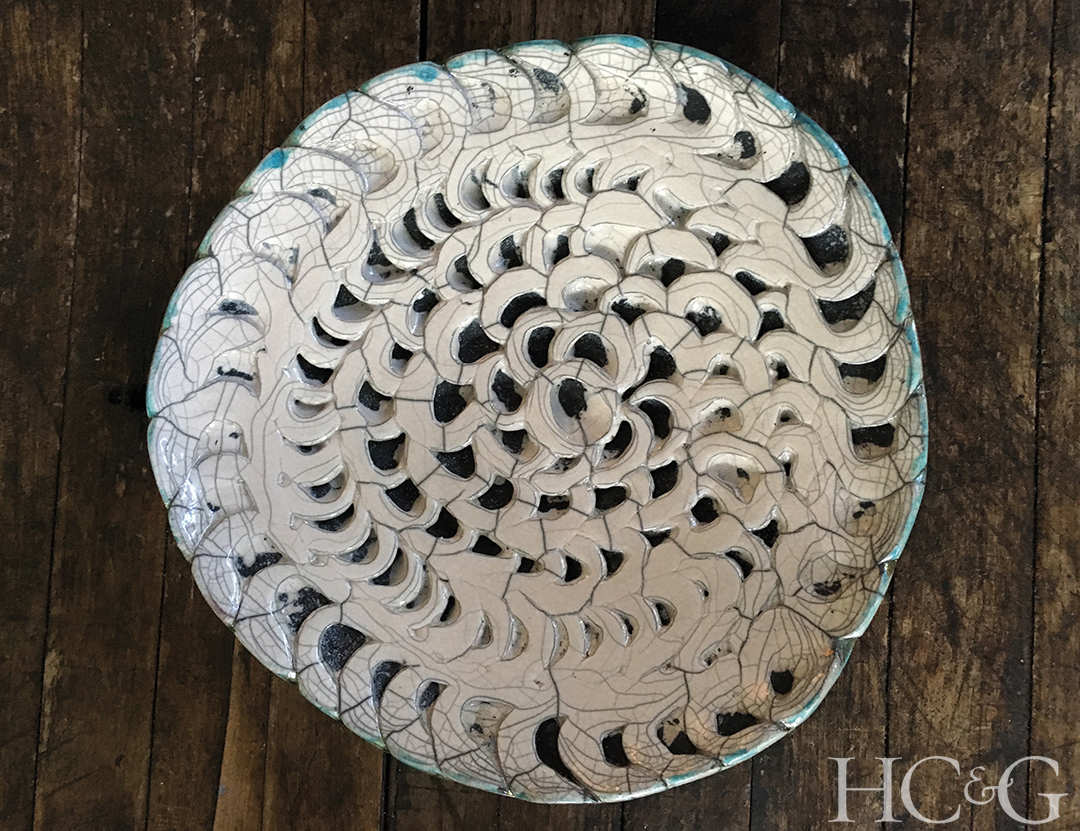 For one of Lomuscio’s more detailed designs—a large bowl that features dozens of wave-shaped clay protrusions—she begins by rolling out a slab of clay, laying it over a semicircular plaster mold, and then cutting it to size. Next, she applies small balls of extra clay to the surface, which she smears with her thumb in an overlapping manner, then gently shapes with a paddle to incorporate an “extra layer of texture.” Once a bowl dries, Lomuscio fires it offsite at the Clay Art Guild, and then coats it with a white crackle glaze, leaving some untouched spots on the exterior. A second firing, called raku, follows. During this special process, she removes the bowl from an outdoor kiln mid-fire and puts it straight into a bag of wood shavings and sawdust, causing it to ignite. Lomuscio then covers the flames with a metal bucket for 20 minutes, trapping the carbon and turning any unglazed areas black. The result: a striking contrast between black and white. “I like leaving my mark on each piece,” she says of her hands-on approach, “so that wherever it goes, there’s a human connection.”

A version of this article appeared in the June 2017 issue of HC&G (Hamptons Cottages & Gardens) with the headline: Scratching the Surface.