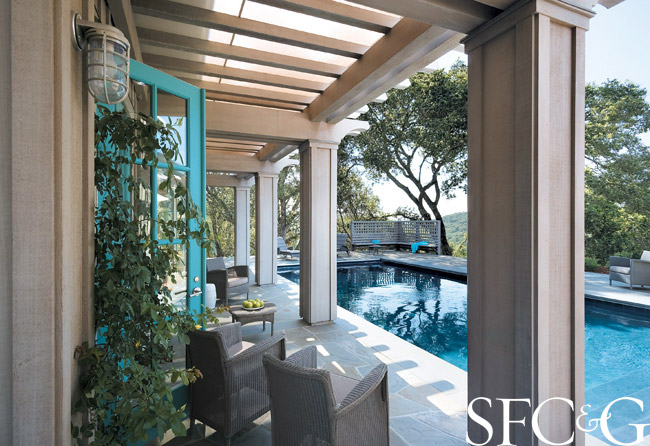 Sonoma County is distinct in character from Napa, its better-known neighbor: The hilly, intimate landscape, with beautiful winding roads, is for me one of the most sublime settings in the American landscape. Our clients, a couple for whom we have designed both a primary residence in San Francisco and a pied-à-terre in New York, had a house built for them in the 1970s on a twenty-acre site—a spectacular location on a ridge of land that drops off into valleys on three sides, with a view of Sonoma Mountain to the south. When a neighboring property became available, the couple asked if I’d visit and give them my thoughts on its potential.

The building site, on the high point of the adjacent land, roughly a quarter-mile from their house, offered 270-degree views across Sonoma Valley toward Napa to the east and Sugarloaf Mountain to the north. It offered a counterpoint to their existing residence and, together with the pool house, would create an unusual variety of topographical experiences—and an equal variety of views. 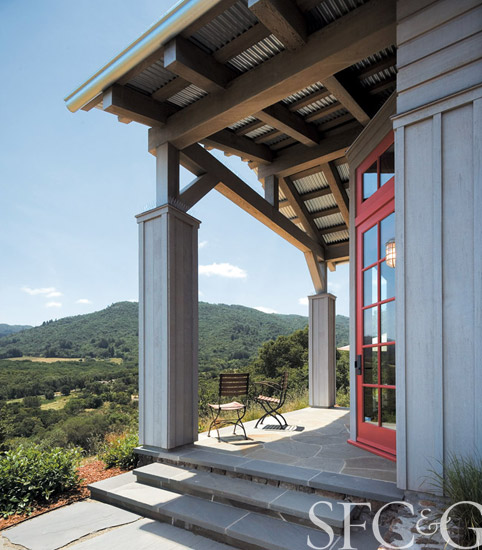 On the hilltop, the couple envisioned a writer’s retreat and a place for al-fresco entertaining, which they named the Ahwahnee after the legendary National Park Service lodge in Yosemite, a favorite of theirs. For inspiration, we drew on the work of California architects Bernard Maybeck and William Wurster, and the vernacular barn and shed buildings found throughout the region. The principal models, however, were a Frank Lloyd Wright project, and the gardener’s cottage by Karl Friedrich Schinkel in Potsdam featuring two symmetrically related pavilions separated by a terrace. We designed a U-shaped composition with an open-air dining terrace framed by pergolas, an enclosed structure—named the Poet’s Room—with an almost identical footprint and an expanse of green lawn serving as an “oasis” between them.

Crucial to the design’s success is the element of surprise. Approaching from the motor court, one sees what appears to be two farm buildings accessed via a pair of large sliding barn doors— a blind wall offering no hint of what is to come. 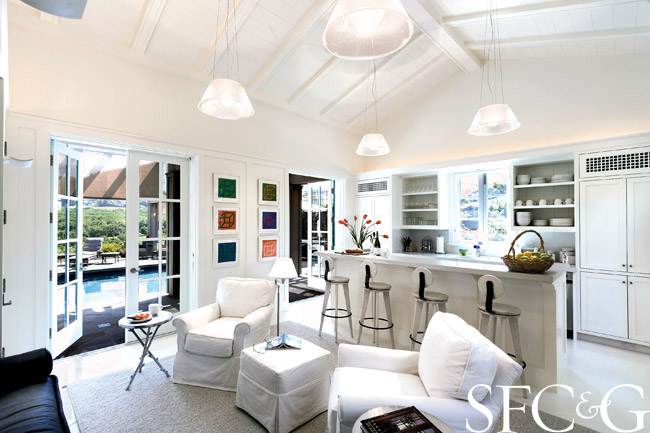 Opening the doors reveals a view across the green carpet of lawn to a vista of mountains and valleys beyond, framed by the al-fresco dining area to the right, and the Poet’s Room at left. The flagstone-paved dining area features over-scaled pergola members supported by four “board-and-batten order” piers; the Poet’s Room—created in collaboration with interior designer Agnes Bourne—is dominated by a 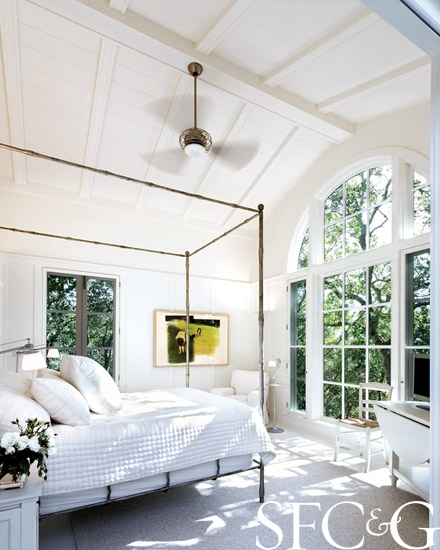 The pool cottage offers a contrastingly intimate, enclosed experience. While the architectural language is similar to the Ahwahnee’s, the relationship between the interior and exterior spaces is quite different, with the structure adjoining and opening onto the pool area, and the pergola, deployed in a modified L-shape, uniting the two zones. Similarly, the small one-bedroom cottage shares the simple, carefully wrought details of its hilltop companion, but, instead of the rich reds and natural wood tones of the Ahwahnee, the interior is almost pure white as a quiet backdrop for the pool. The sense of privacy, presence of water, and interplay between sunshine and shadow give the pool cottage its own special character.

This project afforded an unusual opportunity: to use familiar compositional elements and deploy them in different combinations, at multiple scales, and with varying degrees of emphasis, across five distinct structures: board-and-batten, corrugated metal, articulated pillars and trellises, as well as specific colors and materials, all working together to bring continuity to a multiplicity of experiences. This continuity, moreover, extends to all of the work we have designed for this client. As they move from place to place, everything remains comfortable and familiar—the circumstances may change, but the two are always at home.

A version of this article appeared in the May 2014 issue of San Francisco Cottages & Gardens with the headline: Poet's Retreat.