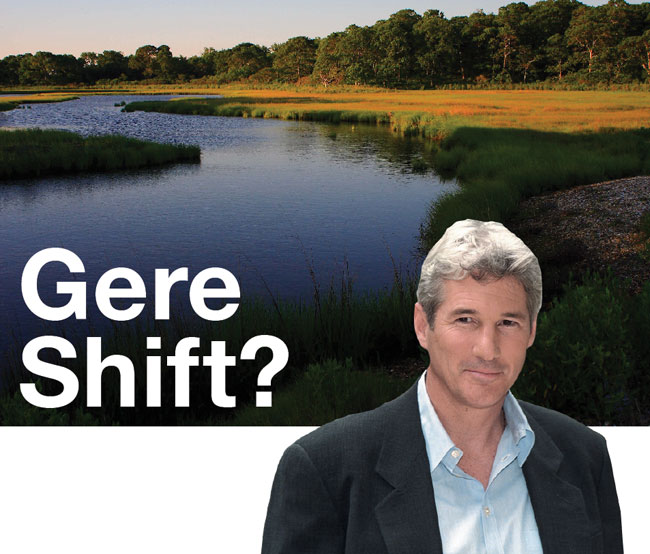 Looking For Mr. Gere Richard Gere’s Actors’ Colony estate in North Haven is said to be on the market for $65 million.


The Actors’ Colony in North Haven might be losing one of its namesakes. Richard Gere’s waterfront property, Strongheart, is widely reported to be on the market for $65 million. The six-acre estate includes 300 feet on Sag Harbor Bay overlooking the Mashomack Preserve on Shelter Island. Recently renovated and expanded, its three-story manor house comes with two additional guesthouses, a pool, gardens, outdoor fireplace pavilion, pond, a teahouse with permits for a dock, and an abundance of magical meditation spots. Gere currently lives in Bedford in Westchester County, where he and his wife, Carey Lowell, own the Bedford Post inn.

The Actors’ Colony has been a retreat for thespians since the early 1900s, long before there was a highway to the Hamptons (let alone a south of the highway). The owner of the Algonquin Hotel, Frank Case, entertained the likes of Douglas Fairbanks, Jr., and Mary Pickford here; famous creative residents since then have included everyone from Irving Berlin to Jimmy Buffett, who have been drawn to the area for its waterfront vistas and privacy.

Strongheart, which dates from 1902, was built by Robert Edeson, who was a star of stage and screen and appeared in Cecil B. DeMille’s The Ten Commandments. He is said to have named Strongheart after the title of one of his favorite Broadway plays. In 1909 The New York Times reported, “At the fashionable North Haven colony, summer life is already astir. Mr. and Mrs. Robert Edeson are at their summer home in the Actors’ Colony. They have improved their estate with an artificial lake and a floating garden.”

How times have changed. Prospective boldface-named buyers will likely be attracted not only to the private gated drive and protective lush landscaping, but also to the ability to arrive via seaplane.


FASHIONABLY GREAT
September is fashion season, when the major collections for spring 2014 are shown in New York, Milan, London, and Paris. Not surprisingly, many of the fashion and style world’s top talents have made their mark on the Hamptons. Now you can get a taste for the chic life yourself with these current market listings.

WOOLDON MANOR
Wooldon Manor, an iconic oceanfront estate on Gin Lane in Southampton, is listed for $48 million with John McHugh of Sotheby’s International Realty. It boasts a pedigreed past, with previous owners including Jessie Woolworth Donahue of the Woolworth dynasty and Edmund Lynch, founding partner of Merrill Lynch. (The property’s name comes from combining the last names of Jessie Woolworth and her husband, James Donahue.) Built by Dr. Peter Wycoff in 1900, it was sold to the Donahues in 1928, who renovated the house and expanded it into one of Southampton’s most opulent estates. 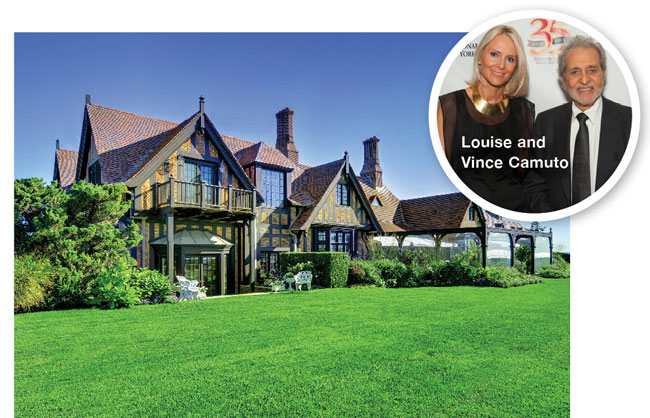 The home’s current owners are Vince and Louise Camuto, global fashion leaders who have put their stylish imprint on the estate. The co-founder of Nine West and creator of an eponymous fashion line, Vince Camuto is expanding into the luxury lifestyle market. (His brand reportedly took in $2.5 billion at retail in 2010.) He and his wife spared no expense to lend a modern touch to Wooldon Manor while retaining its grandeur. The 5.25-acre estate (with additional acreage available) includes the main house, a pool and pool house, formal gardens, a romantic greenhouse, and a tennis court with sweeping views of Lake Agawam and the Atlantic Ocean. Vaulted ceilings, limestone floors, expansive hearths, and wide terraces leading to the ocean underscore the Tudor-style home’s regal air. 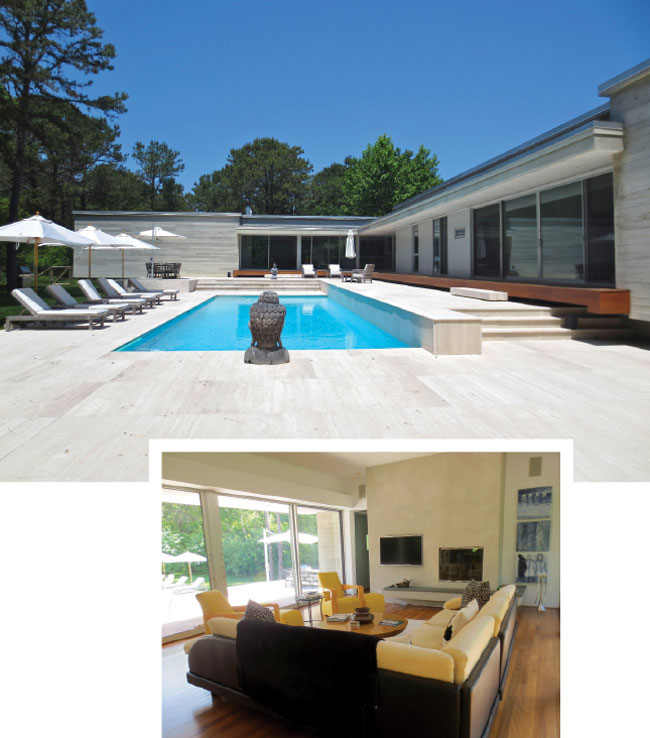 Mod Squad Designed down to the furnishings by Gisue and Mojgan Hariri in 2004, this house in Sagaponack North is listed for $6.5 million with Douglas Elliman’s Lori Barbaria, 631-537-5900.


SISTER ACT
Like a stylist who puts together the perfect outfit, the design team of sisters Gisue and Mojgan Hariri created a modern dream home in Sagaponack North, hand-picking all the furnishings in order to complement the structure, completed in 2004. The 4,600-square-foot house is now on the market for $6.5 million, listed with Lori Barbaria of Douglas Elliman.

The first house built as part of the Houses of Sagaponac development project, it includes six bedrooms and six-and-a-half baths on 2.8 acres and was inspired by a Giacometti sculpture entitled Figure in a Box Between Two Boxes Which Are Houses. Hariri & Hariri, which works with corporations, developers, fashion labels, and cultural and institutional as well as high-profile private clients, is “an international award-winning design team who created a museum-quality home,” says Barbaria. “The only house they’ve done on Long Island, this project is very special, sleek, and stylish, designed for indoor and outdoor entertaining. The furniture is included in the sale of the house because it was hand-picked for the space, giving the home a rare couture quality and pedigree. Everything fits beautifully. You can just move right in.”

FRENCH CONNECTION
Not all couture properties come with a price tag to match. Known for his line of glamorous cocktail dresses and evening wear, fashion designer Roland Nivelais has dressed everyone from prominent politicians to actresses such as Sigourney Weaver. The French-born Nivelais, whose salon and showroom is located in Manhattan, bought a charming cottage in Bridgehampton as a weekend retreat in 2000. He transformed the three-bedroom, three-bath shingled cottage from country casual to European chic, redoing the kitchen and bathrooms with ornate marble and installing French doors, which open to the lushly planted grounds. The property, which was featured in the 2012 holiday issue of HC&G, is listed for $1.595 million with Elaine Stimmel, Jonathan Milioti, and Felicitas Kohl of Corcoran. 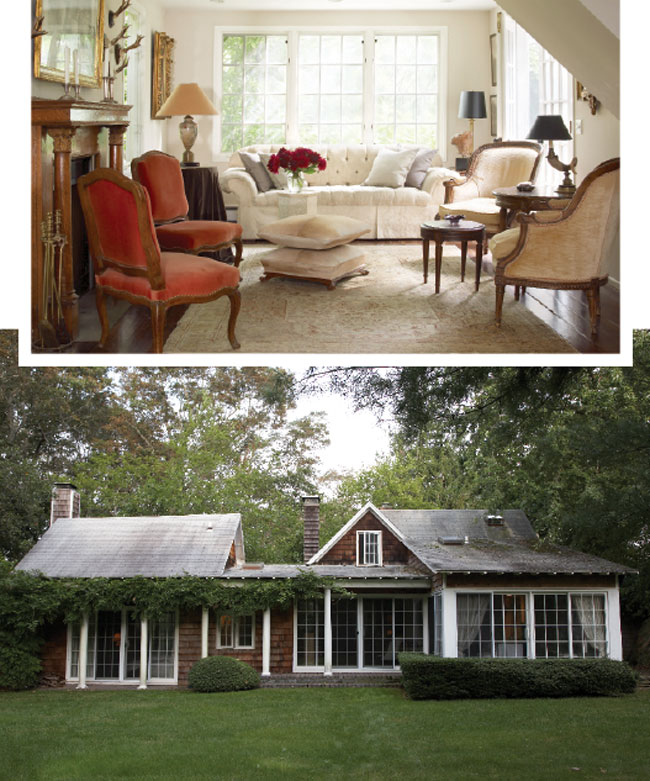 
“There’s an aesthetic connection between my clothes and my home that’s important to me,” says Nivelais. “I don’t even swim that often, but I love the 74-foot-long lap pool, which looks like a pond, especially when illuminated at night. The house is close to the village but private, at the end of a winding road that gives it a mysterious feeling, like you’re somewhere else.” Nivelais says the large master bedroom, with its high ceilings and fireplace, is especially seductive, as are the property’s 100-year-old trees, which add to the European ambiance. “I don’t believe in casual anything,” he declares. “In the mornings, I wear a robe. I don’t wear a jogging outfit.”


REAL ESTATE STILL ON THE RISE
According to real estate appraisal and consulting firm Miller Samuel Inc.’s Hamptons Sales Report, created for Douglas Elliman, the second quarter of 2013 was strong for area real estate, with average sales prices rising 39 percent from the first quarter, or $1.218 million to $1.696 million. In the Hamptons luxury market, which considers the top 10 percent of sales, average prices rose 48 percent from the first quarter of 2013, or $4.753 million to $7.071 million.

Douglas Elliman’s Paul Brennan states, “People were taking a breather in the first quarter of 2013 after the strong sales in fourth quarter 2012 due to the fiscal cliff crisis. A majority of the current sales are under $1 million and going strong, and at the high end, if we get a few more big sales within the next couple months, then the market will be clicking on all cylinders. We could have a very good fall. Also, at some point builders have to make a decision. They can’t hold on to properties forever. I think we’ll see a lot of action coming up.”

Brennan sees the market as cyclical. “In my 33 years of experience,” he says, “I’ve noticed that when I get a big sale going I think I’m going to have the only one, and then I find out there are five other big sales happening at the same time.” Along with Wall Streeters, European interest in Hamptons properties hasn’t waned, Brennan notes. “A lot of shopkeepers and high-end antiques dealers are seeing a lot of Europeans spending more money, and real estate may follow suit.”


“At the high end, if we get a few more big sales within the next couple months, then the market will be clicking on all cylinders”

Correct pricing can be key. Sales are currently holding at around a 10 percent reduction from asking price, which Brennan says “is healthy from a pricing standpoint. People are willing to bite within 10 percent, and a lot of potential buyers are also looking for something that’s done—I call them off-the-shelf houses.” Consider the $58.5 million estate in Water Mill that he’s currently repping. The property includes a 20,000-square-foot home, pool, Jacuzzi, tennis, gym, theater, sauna, and dock. “It’s spectacular. Everything is done meticulously, and it’s on four acres of waterfront on Mecox Bay.”


Yankee, Go Home
Jeffrey Rosen, creative director of Yankee Barn Homes, is developing his own brand of Hamptons homes by marketing affordable, pre-designed post-and-beam structures made of kiln-dried Douglas fir and featuring adaptable interior spaces. “I come from a residential and interior design background and started as a spec builder in the Hamptons ten years ago,” says Rosen. “I like the notion of creating houses that are new and technologically advanced, but look like older houses. The Yankee Barn image is iconic, recalling New England and farming.”


A Yankee Barn home typically features a traditional shell with a contemporary open floor plan. “I met the folks at Yankee Barn’s headquarters in New Hampshire and fell in love with their product,” continues Rosen. “I built my first Yankee Barn home in East Hampton three years ago, and it sold over the asking price in two weeks.” Rosen subsequently built three more in the past year and a half—two sold within two months and the other rented for the summer—and he’s currently building another and breaking ground for a new one in East Hampton Village next month. Prices for the properties generally range between $3 and $4 million.

“Clients can work off one of the plans we have or start from square one,” Rosen says. “We can design and draw a house in two to three weeks, including engineering and stamping, and can fast-track a build. If there aren’t any permit issues, we can go from design to delivery of the physical house within two to three months, so it moves very quickly. Our process is unique, because the houses are phenomenally tight in terms of sound and air, and therefore much more cost effective. They have the appeal of hand-made construction while being technologically up to date, green, and speedy.” Rosen must be on to something. If there’s anything that’s more desirable in the Hamptons, it’s instant gratification.