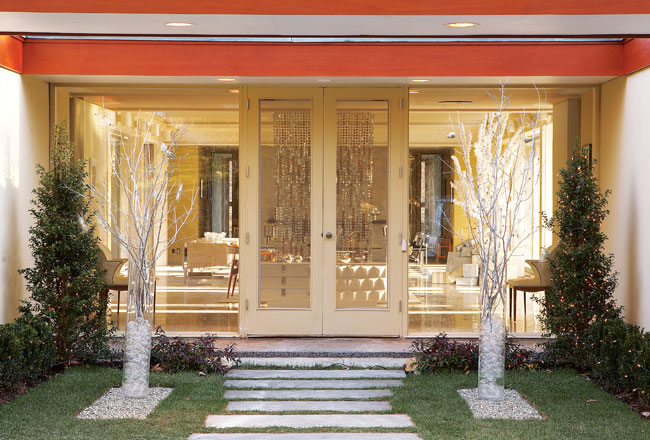 Like a gift tucked under the tree (in this case, dozens of trees), a glass-wrapped box sits nestled off a classic New Canaan lane, slowly revealing itself at the end of a long, sloping driveway. Welcome to the Bridge House, a 1957 modernist masterpiece designed by John M. Johansen, a member of the “Harvard Five” group of architects who settled in New Canaan in the Forties. Johansen built the Bridge House as an “H,” with a main room that arches over the Rippowam River and four anchored pavilions, whose specific purpose is signified by the icons etched on its exterior walls. There’s an hourglasses on the kitchen wing, eggs for the children/guest wing, stars on the master suite, and for that magical central living room stretched across the banks of the river? Champagne bubbles, of course.

Last year, behind a Paco Rabanne screen of plastic laminate discs hanging by the entry, a holiday scene unfurled that was at once retro and modern, sexy and stark—and smoothly shaken, not stirred. “Imagine if James Bond threw a New Year’s Eve Party,” said Jason DePierre, the designer who created the house’s holiday decor for the annual Homes for the Holidays House Tour. DePierre, an architect by training whose portfolio includes slick Coach boutiques in Tokyo and Colonials in Greenwich, channeled “the complete opposite of your traditional family affair” in homage to the Bridge House’s very adult, very cosmopolitan, very “007” feel. 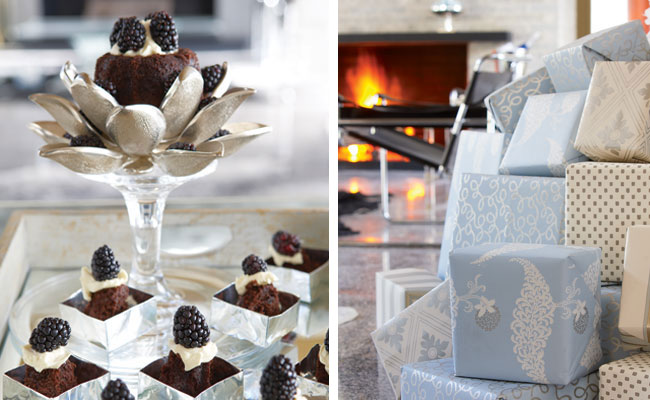 The home’s present owner is decorative and fine arts dealer and collector Michael Fedele, who is otherwise in residence on Manhattan’s Upper East Side in a pre-war abode light-years away from his mid-century modern country retreat. Originally searching for a more classic home, Fedele was seduced by the property and purchased it in 2009 from the original owners. He plunged into a respectful restoration that is breathing new life into the home, where early 20th-century furniture will live under the celebrated gold-leaf vaulted ceiling of the main room, with its glass walls that slide entirely open. This intersection between structure and setting inspired DePierre, when he was matched with the Bridge House. “I thought: I just want to throw a party here,” he recalled.

Glamour was the guest of honor at that party, which took place in the main room, all evidence of construction hidden in the pavilions. The idea, said DePierre, was to immerse visitors into a mid-century party-in-progress. Volunteers in printed vintage housecoats attended to cakes and Champagne, as a spirited retro mix (think Eartha Kitt, Ray Charles and Mel Tormé) filled the air. Not wanting to compete with the house’s clean lines, DePierre limited his vision to glistening, “colorless” white and silver, from the white birch branches standing sentinel at the house’s entry to the silver, clear and white balloons filling the pool. For the Christmas tree, inspired by the simplicity and modernity of a cherry blossom, DePierre dressed the budless branches of a live dogwood with white lights and a garland of white silk flowers. 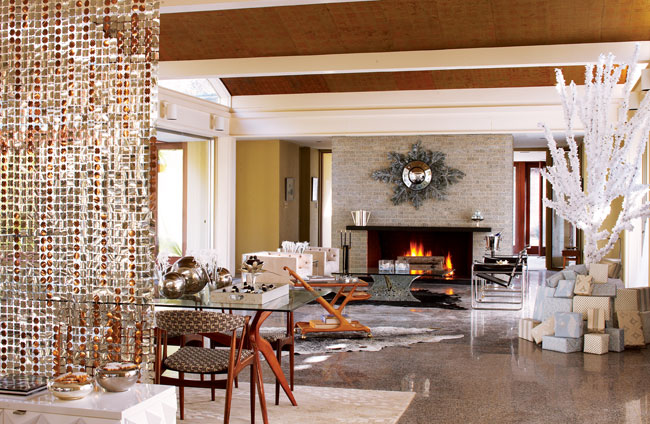 “Be restrained but don’t be afraid,” said DePierre, who admitted to some nervousness about his custom fir and mirror wreath above the fireplace, a nod to starburst mirrors of the 1960s and ultimately the room’s pièce de résistance. Restraint allowed DePierre “to keep the feeling ‘festive’ without overwhelming the house.” Sparseness is effective, he explained, when each item is beautiful in its simplicity; not every piece needs to be a showstopper. “You need to have your star and your supporting characters,” he said.