Home Tour: A Contemporary Take on a Traditional Beach House 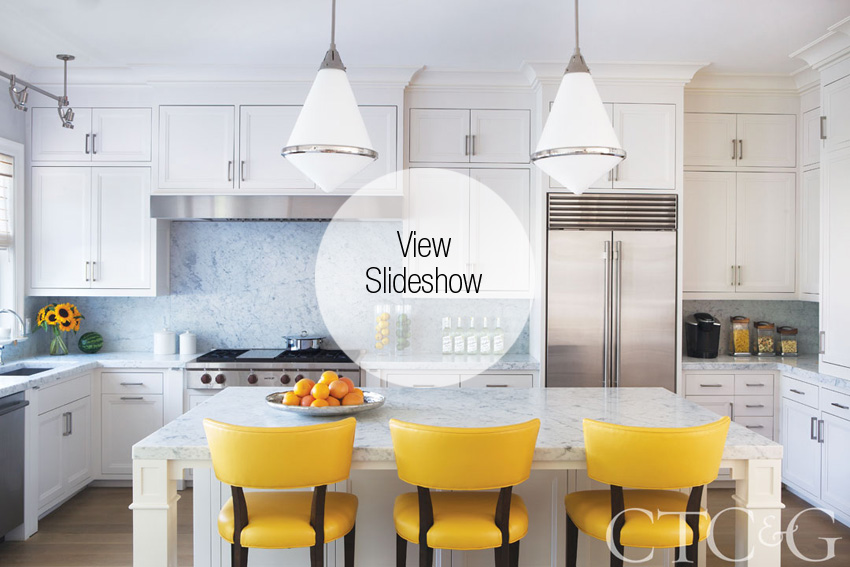 Four years ago, when one Westport couple decided to spend the rest of their lives together, they were faced with a small stumbling block: Namely the blue 1950s-era vinyl-sided cape that the husband had bought in the mid 1980s. “I took one look at the house and said, ‘I can’t live here’,” the wife recalls. “But he didn’t want to leave the area.” And who could blame him? From its hilltop perch in the Compo Beach section of Westport, it had a sensational view of Long Island Sound. After looking around for a more suitable home and coming up short, they decided to take the plunge, demolish the house, and start from scratch.

Working with Westport architect Anthony Tartaglia, they envisioned a contemporary take on a traditional beach house: clean, modern lines, an open, flexible floor plan, and plenty of windows to maximize the water view. Originally, the wife planned to handle the interiors on her own. But as the project was nearing completion, she realized she needed some help. A serendipitous conversation with a trainer at her gym, led her to the Fairfield-based team of Ray Forehand and Christina Lake. “It was purely random luck,” she notes. “They were such a joy to work with.”

Forehand redesigned the kitchen and did all the millwork, while Lake came up with a game plan for the interiors. “The husband has traditional tastes, and the wife is more contemporary,” says Lake. “We had to marry the two together and make it more transitional.” The only caveat? “I didn’t want any seashells or to the beach signs,” the wife says. “The house is more sophisticated than that.”

The shingle-style Colonial, which was part of the Near & Far Aid House Tour in 2015, comprises four levels: a basement/garage area, the main floor living spaces, a second-floor master bedroom suite and guest room, and a third-floor office and balcony. The neutral color palette takes its cue from the living room’s stacked tile fireplace, a coastal-toned medley of ambers, sands, camels, soft grays and ivories. “It dictated the entire house,” explains Lake. Downstairs, the walls are painted Benjamin Moore’s Pale Oak; white oak floors are finished in a Rubio Monocoat that took 30 samples to get exactly right. Both the dining room and living room feature custom-designed rift-sawn oak built-ins. “I wanted the walls to be really dramatic,” says Lake. “Especially the dining room, as it’s the first thing you see.” A pair of channel-stitched area rugs ties the two rooms together.

Furnishings throughout are comfortable and durable: a chenille-covered sectional, suede throw pillows, linen-covered dining chairs, and, in the all-white kitchen, yellow leather bar stools. “The stools marry into the living room with a real jolt of saturated color,” says Lake. In the family room, the tones are much warmer: a vinyl basketweave wall covering, tan drapes with orange piping, custom walnut cabinetry. Upstairs the mood shifts slightly: In the master bedroom, a monochromatic use of sea-glass green—from the carpet to the custom bedding—contributes to the serene, spa-like space.

The biggest challenge for the designers was convincing the couple to stay the course and stick to the plan. “The living room has geometric print sheers,” says the wife. “I never had done geometric, now they are one of my favorite things.” As is the custom square walnut dining table that extends to seat 12. “That was a huge leap of faith,” she continue. “I had a French country dining table that I loved and wanted to use.”

“I kept reminding her that she was the one directing this project,” says Lake. “ She wanted contemporary, but she kept reeling it back.”

“It’s true,” says the wife “I got nervous. It’s hard not to want to fall back into the familiar. But in the end, I’m so glad I trusted her. Now when I go down into the basement and see all the things we stored from my old house, the colors hurt my eyes.”

A version of this article appeared in the October 2016 issue of CTC&G (Connecticut Cottages & Gardens) with the headline: Fresh Start.