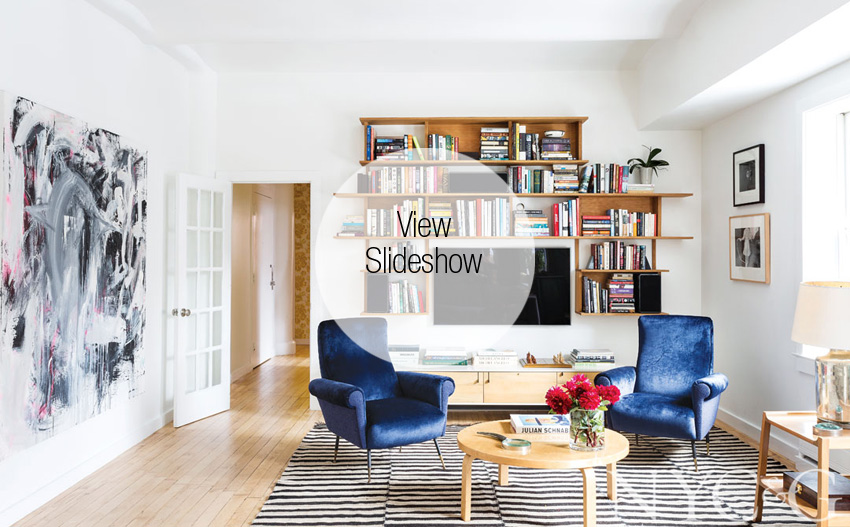 The adage “Home is where the heart is” might be a bit of a cliché, but for Keven Duffy, it couldn’t ring truer. “I describe my home as a fresh, happy, and joyful place,” she says. “It reflects how I feel about my family.”

Duffy, a psychotherapist, had finished grad school in the spring of 2014, having given her life a refresh after a previous career as a film executive. Simultaneously, she had also endeavored to make good on a change for her two girls, promising that when they reached a certain age, they would have their own rooms in the family’s Tribeca apartment. Duffy’s plan: Turn her existing home office into a new bedroom, and relocate her office space midway through the 2,000-square-foot loft. But as a busy mom, she didn’t have a lot of time and didn’t want the job to become complicated.

Fortuitously, fate brought her together with a designer who could help her. Duffy is involved in Scenarios, a nonprofit organization that helps young people develop their voice through storytelling and film, and found herself seated at the same table as decorator Mary Young at a benefit dinner one night. The two women got to chatting, struck up an instant friendship, and agreed to meet at Duffy’s apartment. “Mary came in with so many good ideas—and I listened,” Duffy recalls.

What started with the redesign of one room turned into an entire overhaul, completed in just a couple of months. “If we were going to do one part of the apartment, it made sense to tackle the rest,” says Young, who works primarily in New York, Los Angeles, and her native Dallas. “I’m glad we did—it made a big difference.” The bedroom in the back of the loft came first: Here, Young installed a full-size bed against a backdrop of whimsical Orla Kiely wallpaper. A bunk bed was retained for the middle bedroom, given that the space was too small for anything larger; a Pierre Frey squirrel-print wallpaper in soft pink gives the tiny environs a playful air.
Young’s wallpaper wizardry extends to the primary hallway, which boasts a bright yellow Christopher Farr Cloth print. “We keep a silly household, and the wallpaper reflects that,” says Duffy. “I walk past it every day, and it puts a smile on my face.” The vibrant prints and sunny palette make the apartment seem “very light,” adds Young. “You don’t feel like you’re in New York.”

Duffy also collects contemporary art, so it was important to maintain a sense of balance, with subtler backdrops employed to display work such as black-and-white photographs by Dennis Hopper. “Keven has really good taste, so working with her was a pleasure,” says Young, who often repurposed or repositioned Duffy’s existing pieces, including a living room sofa that she re-covered in a sturdy blue Perennials fabric and moved to a nook in the master bedroom. “Mary works with what you have, and creates space where there wasn’t any before,” enthuses Duffy. “She made my bedroom a haven. It was always comfortable, but now it’s so much more.”

Young’s affinity for pieces with value and purpose underscores her ability to marry both traditional and modern points of view. “My approach is European eclectic with a lighter side,” says the designer, who launched her firm, Young and Frances (her last and middle names), six years ago in Los Angeles, after consulting with other decorators such as Peter Dunham and Kathryn M. Ireland. “I like a room that’s not too put together, one where I can add an older piece to make it more elegant. The mix is what appeals to me more than anything.”

Accordingly, Duffy’s older furniture interacts seamlessly with functional, smart new additions, such as the hanging wicker chair that delineates the border between the dining area and the kitchen. “We went through dozens of choices, and Mary finally discovered exactly the right one,” Duffy says. “She absolutely will not give up until she finds what you want. When I walk into my apartment now, all I can think is, I love my home. And I know my daughters love it too. I hope people who visit feel the same way.”

A version of this article appeared in the March 2016 issue of NYC&G (New York Cottages & Gardens) with the headline: Young at Heart.