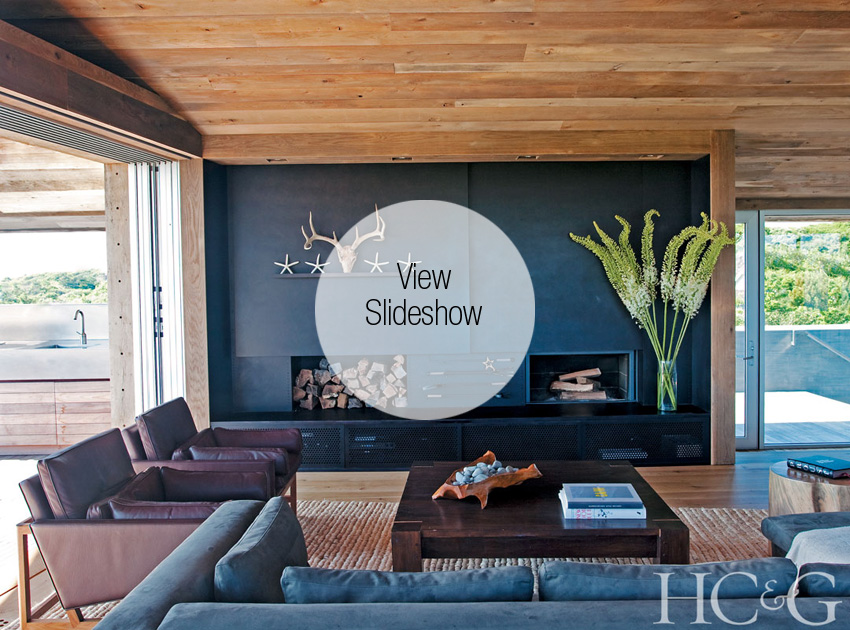 Having grown up in Montauk, Paul Masi knew it as a unique, surprising place, sometimes moody in its extremely local weather, and a rare community where the cast of intermingling characters includes high-profile celebrities and local fishermen. Rick and Alicia Zarou Scanlon, on the other hand, aren’t natives, but had been visiting Montauk for years, smitten by the laid-back lifestyle and sheer beauty of the terrain. “It was our favorite place on earth,” says Alicia, who spent childhood summers here. So when the couple decided to build a vacation home, their collaboration with Masi, a principal and co-owner of Bates Masi + Architects, couldn’t have been a better fit.

One small snag: The American couple and their two daughters, now 9 and 11, are based in Singapore. “We moved to Asia for a year,” Alicia says, “and have stayed for 16.” The Scanlons had long admired Masi’s work, typically a combination of dynamic geometries and traditional materials, and Masi recounts that “when Rick and Alicia came to me, I was beginning to explore the relationship between modern and the local vernacular.” Fortunately, that’s precisely the direction the Scanlons were looking to go in with their dream home, located on a rolling 1.6-acre site on a former horse ranch. “It’s a very special piece of property,” Alicia says, “with amazing views and almost nothing to the east of us but state parkland.”

Siting the structure, which was built by Paul and Paulette Davis, a local husband-and-wife team, meant taking advantage of the hilltop views. “We spent a lot of time on scaffolds,” recalls Masi, “deciding what view we would frame from each of the rooms.” The final result, built almost entirely of wood and bluestone, with metal accents, is a compellingly asymmetrical construction. The house is comprised of an unmatched pair of two-story structures connected by a bridge. A series of staircases encourages moving around and through the house and finding your own comfort zone, of which there are many. In plan the building is not grounded on a rectangle; only one corner of the footprint is a right angle.

For the overall design scheme, “We definitely wanted something really modern,” says Alicia, “but rustic, using lots of wood. And I’ve always wanted a shingle roof.” It was also important that the new home be able to accommodate lots of relatives for extended stays, be open to the outdoors, and have plenty of room for art. An artists’ rep, Alicia has amassed a client roster including such talents as photographer and fellow Montauk resident Raphael Mazzucco, whose work is prominently displayed throughout the house.

To furnish the rooms, Alicia chose neutral, natural materials, which echo those used in the architecture, and bold, modern forms. In the great room, she paired a charcoal-gray microsuede sectional sofa from De La Espada with brown leather BassamFellows chairs and an Indonesian teak coffee table. The dining area is home to a pair of square copper tables from Desiron, steel and leather chairs by Mark Albrecht and Ingo Maurer pendant lights. Elsewhere in the house modern classics rub shoulders with Asian antiques and contemporary photography.

For Masi, giving a home a context always involves incorporating the personality of the inhabitants. “I wanted the house to be like the Scanlons,” he says. “They’re very unassuming and modest when you first meet them, but the more time you spend with them, the more interesting and fascinating they become. And the house really comes alive when there are people in it. It’s a great house for entertaining because people congregate here and there in small groups that are constantly shifting. People even sit out on the stairs.”

Good conversation aside, it’s likely they also just can’t resist the stunning views— the careful management of which is one of Masi’s singular achievements. “There are certain places,” says Alicia, “where I can sit down and see Lake Montauk, Long Island Sound and the Atlantic Ocean all at the same time. It’s really magical.”

A version of this article appeared in the August 15 2011 issue of HC&G (Hamptons Cottages & Gardens) with the headline: Modern Montauk.