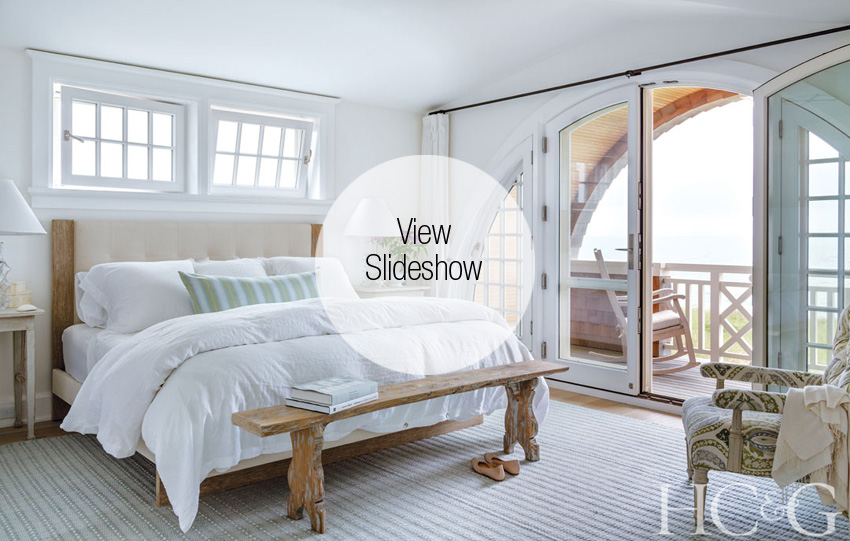 The tides have contributed deeply to a new oceanfront home in Amagansett, depositing especially shapely shells, whalebones, driftwood, and sand dunes, all inspirational fodder for decorator Brad Ford. “Throughout the house, I wanted to make references to nature and the beach,” the New York–based Ford says of his work on the project, which includes an actual beached whalebone, employed as a piece of sculpture in the living room. Subtler but equally powerful nods to nature exist everywhere—in neutral hues that mirror those of the East End shoreline, mid-20th-century-modern chairs with sinuous arms that mimic curvaceous shells, and distressed surfaces evocative of driftwood.

It took about five years to secure the necessary permits to build the home—an expansive shingle-style dwelling designed by Shope Reno Wharton—and Ford’s clients, a husband and wife with three children, were ready to move fast when it came to the interiors. The wife, in particular, “was really well prepared,” recalls the decorator. “She had clipped lots of images of pieces she liked and wanted for the rooms, which is always a good starting point. It indicates a client with a sense of direction and a distinctive point of view. She has excellent taste and was determined that the house would reflect an evolved sensibility, rather than something forced or ‘too decorated.’”

Client and designer were in immediate accord about the muted color scheme. “A neutral palette allows you to alter things in a space more easily,” says Ford. “It’s smarter and more efficient to work with a background that can accommodate vibrant art, furnishing styles that range from vintage to contemporary, a multitude of accessories, and, in this case, three active children.”

Unlike many second-home owners in the Hamptons, the family lives in the house full-time in the summer. “They open the windows and doors and keep them open all season,” Ford says. “Their focus from the start was on having a home that would be low-maintenance, comfortable, and welcoming.” Ford and the wife often shopped together, and he was grateful for her decisiveness. “She’s a patient shopper who is able to make fast decisions, while I tend to think about buying something and make sure it’s right for a room. But our teamwork paid off. She always says how happy she is that her house doesn’t look like anyone else’s.”

In the living room, for instance, a geometrically precise Pietra Cardosa fireplace surround, designed by Ford, serves as an appropriate backdrop for the vigorously tonal painting that hangs above it. Vintage French armchairs are positioned at a cocktail table that Ford likens to a piece of washed-up wood (albeit a beautiful one). And a hunk of petrified wood, its stone-like bark seemingly carved, serves as an end table.

While Ford likes to establish what he refers to as a “warm soul” in rooms, he also likes to startle, installing a severely angled Carl Auböck bamboo lamp in the family room and an oversize pendant in the dining area. The latter apparatus “is nautical-like,” he says. “I love its generous scale, and the way it stands out in the small bay-windowed space.” A lyrical painting by Elliott Puckette nods to the hues and movements of the ocean beyond.

The master suite is a carefully articulated blend of masculine and feminine. “It’s important to create a nice balance in a master bedroom, so that both genders feel equal,” says Ford, who designed the custom king bed and kept window treatments minimal, all the better to take advantage of the ocean views. An armchair, he adds, “has a shape that seems feminine, but I covered it in a paisley that not only reminds me of the flow of ocean water, but also a man’s tie.” Rather than swim against the current, it seems, Ford smartly caught a good wave and rode it all the way in.

A version of this article appeared in the June 2016 issue of HC&G (Hamptons Cottages & Gardens) with the headline: Jewel in the Dunes.