For Springs painter Barbara Thomas, home is where the art is. 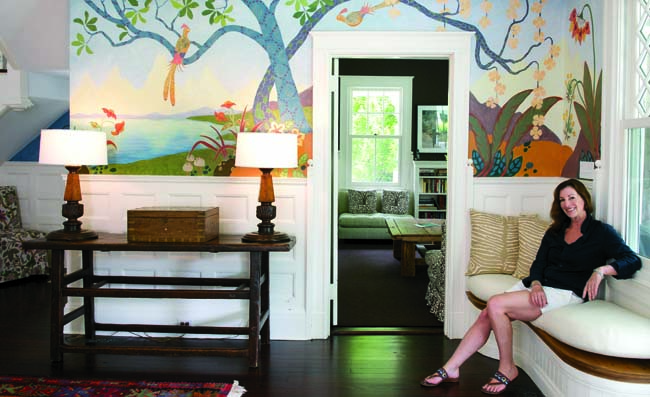 When Barbara Thomas was growing up, father definitely knew best. While many parents eschew the idea of their children pursuing careers in the creative arts, “In my family, they thought being a doctor or a lawyer was ridiculous,” she says. Her father, a commercial illustrator, believed art was the best vocation and encouraged his children to follow suit.

After taking classes at the Art Students League and studying commercial art at Pratt Institute, Thomas worked at a number of advertising agencies in New York, but always painted in her spare time. A move to Bridgehampton in 1986 allowed her to devote all her energies to painting, mostly commissioned work of home and garden portraiture and landscapes. Today her paintings hang on the walls of homes from Cape Cod to Switzerland. “It’s fun to figure out how to get oil paints and solvents on airplanes,” jokes Thomas, who always makes at least one site visit before diving in on a project.

Over the years Thomas has painted everything from dance floors to murals. (“I’ll do anything for money, as long as it has to do with art,” she says.) Clients come to her with varying degrees of specificity on what they want; in one instance, a Southampton homeowner asked for a mural similar to one she had seen in a movie that was filmed in a Newport mansion. Thomas, who for the past two years has worked from her home and studio in the Springs, first made a 12-by-12-inch sketch for the roughly 350 square feet of wall space, then photocopied the sketch and drew a grid over it. Next, a larger grid was drawn on the walls of the home, giving her a sort of map to follow while painting the mural.

Although she spends most of her time rendering clients’ homes and landscapes, Thomas teaches a popular summertime series of garden painting classes through the Parrish Art Museum. Her work can also be seen next month in a group show of landscape paintings at the Grenning Gallery in Sag Harbor (grenninggallery.com). Of living and working in the Hamptons, she says, “The topography is absolutely spectacular. And the Springs has a particularly beautiful, magical light that’s really extraordinary. It’s truly an artists’ destination.”