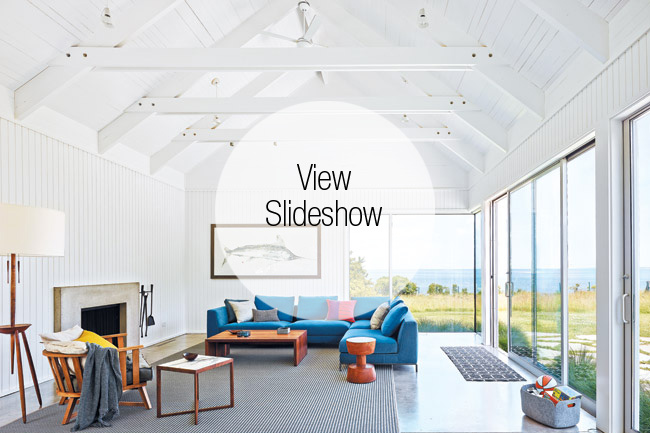 Houses by the water take Robert Young back to his childhood. A native of Boston, the architect grew up near the coast, where sailing was customary, as was owning a boat—particularly in his family, since his father was a boat dealer and built intricate model ships for fun. “The craftsmanship that goes into a boat is a balance between form and function,” Young says. “It’s similar to what I do when I design a house.”

So when a family recently commissioned him to build their new home on Gardiners Bay in Amagansett, Young dove right in. The biggest criteria: no muss and no fuss. The clients wanted a family-friendly home, one in which they wouldn’t have to worry about letting their three very active boys run free. Most of all, they desired a spare space with capacious rooms and smooth floors that could withstand multiple trips to and from the beach.

That meant plenty of wood for the walls and concrete for the floors. “Wood wears well over time, and it’s beachy,” Young says. “It gives the place a cottage-like feel, and can always be touched up, even if it gets dented. As for the poured concrete floors, they’re virtually indestructible.” Polished smooth for indoor use, the concrete also “makes for a very clean palette.”

Given the house’s position—it sits on a 100-foot-high bluff overlooking the bay, with a precariously steep set of stairs leading down to the beach—Young paid special attention to the site plan in order to take advantage of the views. Two shingled volumes that “look like stretched Monopoly houses” meet at a sharp angle, connected by an entryway and embracing the pool and vistas of the water. The homeowners asked Young to put the bulk of his energies into the open living room, dining area, and kitchen, where they knew they’d be spending the majority of their time. In this space and nearly all the other common rooms, Young created a relationship between the indoors and outdoors, installing massive floor-to-ceiling windows. Most of the bedrooms are at the back of the house, with the exception of the master, which also faces the bay. “I wanted my clients to wake up to that view,” the architect says.

When it came to the interiors, the homeowners took an initial stab at the decor, but nothing felt quite right. So they called on designer Suzanne Shaker to give the space just the right air of laid-back luxury. “They didn’t want anything too precious,” Shaker says. “I’m not that formal, and neither are they. A beach house should be a beach house, not an overdone home that you can’t live in. When I first saw the place, I thought, This is the essence of summer living. It’s spacious and takes full advantage of the beautiful East End light.”

Shaker’s initial style cues came from Young’s architecture. The vaulted, barn-like rooms called for a certain simplicity, with natural cotton and linen fabrics and humble artwork throughout. “The materials are very tactile, and the soothing colors go with the environment,” she says. “Along with the tongue-in-groove boards and white wainscoted walls, they bring a cooling, calming sense to everything.”

Turns out the unassuming beach house belies the careful attention and deep thinking that went into it. “I always consider the clients and their goals and try to focus on the details—after all, it’s the subtlety that can make or break a project,” Young says. Indeed, concurs Shaker: “It’s all about the details if you’re really going to get it right.”

A version of this article appeared in the August 15 2015 issue of Hamptons Cottages & Gardens with the headline: Beauty on the Bay.