In Brooklyn, printmaker Lotta Jansdotter indulges in the quirks of nature

Based in a bright and airy studio in the Gowanus section of Brooklyn, Lotta Jansdotter's Scandinavian print empire includes hundreds of different products such as stationery, dresses, ceramics, and now Glimma, a new fabric line with Windham.

Not many people would list “professional   doodler” on their résumé, but Lotta Jansdotter embraces the role. Based in a bright and airy studio in the Gowanus section of Brooklyn, Jansdotter’s Scandinavian print empire includes hundreds of different products such as stationery, dresses, ceramics, and now Glimma, a new fabric line with Windham. Her largely nature-inspired prints are also featured on a line of tabletop accessories made exclusively for Fish’s Eddy, the New York kitchenware company. Later this year, her designs will be showcased on Lenox china, putting a whimsical spin on traditional table settings.

Originally from a small island in the middle of the Baltic Sea, Jansdotter emigrated to the States in her early twenties to attend art school in San Francisco. Seven years ago, she moved to Gowanus, a gritty, industrial area that has become popular with artists and writers. To inject a bit of her Swedish heritage and personality into each piece, Jansdotter keeps a binder of her work that serves as a personal design library. Some pieces are a decade old and date back to the launch of her brand, while others are newly added by the week. “Sometimes I’ll pick a design I created years ago but never got the chance to use,” she says. “I look at it like I’m telling my life story on everything I create.” 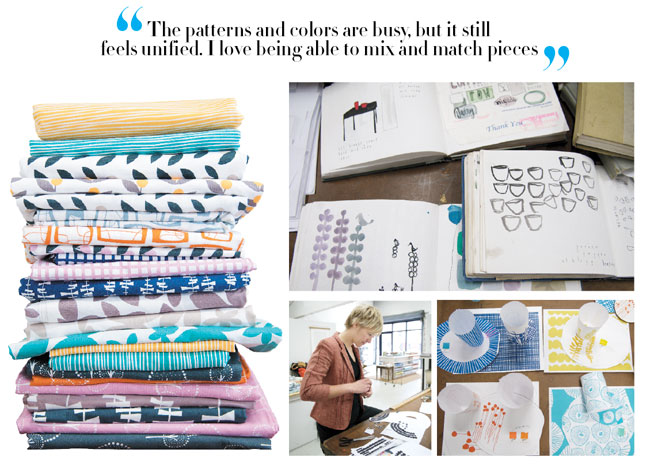 When she designed her line for Fish’s Eddy, Jansdotter began by cutting and pasting pieces of paper to mimic three-dimensional cups, saucers, bowls, and plates. (If she can’t envision how a pattern will wrap around a glass or lie on a piece of fabric, she won’t use it.) That, she says, is the most technical part of the job. Once she’s satisfied with this preliminary work, she starts thinking about color—her favorite part of the process.

“I generally like to work in one palette,” she says, referring to her collaboration with Fish’s Eddy, which includes mugs, juice glasses, small plates, and other accessories. “The patterns and colors are busy, but it still feels unified. I love being able to mix and match pieces.” Although her output is considerable, she admits that her process remains somewhat intuitive. “Everything I do is spontaneous. It’s very hands-on and basic, and if a design comes out wonky or imperfect, I leave it as is. Those pieces always turn out to be my favorites, anyway.”