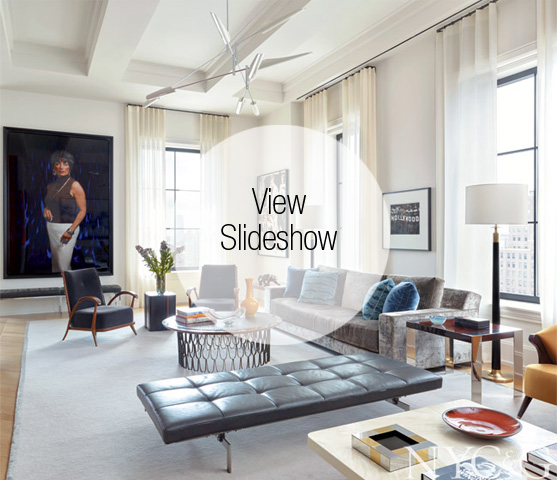 When I initially met my client,” decorator David Scott recalls,"he had a loose-leaf file of all his art and furniture. I was deeply impressed and happy to be working for someone who was so organized. The art itself was edgier than I am used to working with, which was another level of excitement for me. It was an opportunity to learn.”

Scott’s client, an executive for a Fortune 500 company, also had quite a few ideas for the design of his two-bedroom, 2,400-square-foot apartment. Located in Chelsea’s Walker Tower, which was built in 1929 and converted from commercial space to 50 multimillion-dollar lofts in 2013, the apartment not only has considerable art, but also breathtaking views both south and west.

“Whenever you work with someone for the first time,” continues Scott, who opened his eponymous business in 1990 while still a student at the New York School of Interior Design, “the first stage is building trust. After your client starts to trust you, the real collaboration begins. Because part of your job as a designer is not only to carry out what your clients know they want, or think they want, but also to show them other possibilities that they frequently like much better.”

As for this art-loving bachelor, “He didn’t want elaborate window treatments, and he wanted an all-white apartment,” Scott adds. “A lot of collectors do because they think it’s best for the art.” But Scott played things up a bit, mixing white with light neutrals that contrast sharply with the apartment’s dark peripheral spaces.

While the living room is a warm almost-white (specifically, Benjamin Moore’s Grandma’s China), it’s approached via a sizable entry and hallway covered in charcoal-gray silk against black door frames and moldings. “Texture is one of the most important elements of design,” says Scott, who used wallpaper, fabric, and hemp on various walls, plush carpets underfoot, and fabrics like mohair and cashmere. Unifying shots of blue spice up the place further. “Part of the reason is that I just respond to blue as a color,” Scott admits, “but it’s also a significant hue in a lot of the artwork. We weren’t trying to match the art to the sofa, but just acknowledge it, in the same way that you have to acknowledge the architecture when you design a room.”

Scott began his master plan around the art. “When someone has a collection this big and this good, you start with the art, and consider where the major pieces will hang.” Some of the works, all contemporary, were bought for the new digs. “The Wolfgang Tillmans photograph in the master bedroom is a new purchase,” Scott points out, “and so is the big Edward Burtynsky in the dining room.”

Scott layered the furnishings by enhancing his client’s cache of mid-20th-century pieces with upholstered Holly Hunt sofas in the living room and additional vintage classics. The dining room alone includes a Saarinen table, Vladimir Kagan dining chairs, and a Jules Leleu sideboard. There are some less-expected treasures, too, like the rare Philip and Kelvin LaVerne cocktail table in the guest room. He left the Walker Tower developer’s herringbone oak floors intact, complementing them almost exclusively with custom area rugs from Carini Lang.

“When you’re working with such an excellent collection, it’s definitely about the art, but it’s not all about the art,” Scott muses. “It’s also someone’s home. The 1970 Philippe Jean lamp on the credenza in the master bedroom, for example, is there because I like the way the angles of the glass echo the shapes of the mountains in Ed Ruscha’s Full Flavor. Ultimately, I don’t think my client meant to live at this level of luxury, but Walker Tower is a major Art Deco landmark, and even the art seemed to demand maximum respect. So I led him in that direction. As it turns out, I think he’s happy I did.”

A version of this article appeared in the September 2015 issue of New York Cottages & Gardens with the headline: Art Smart.