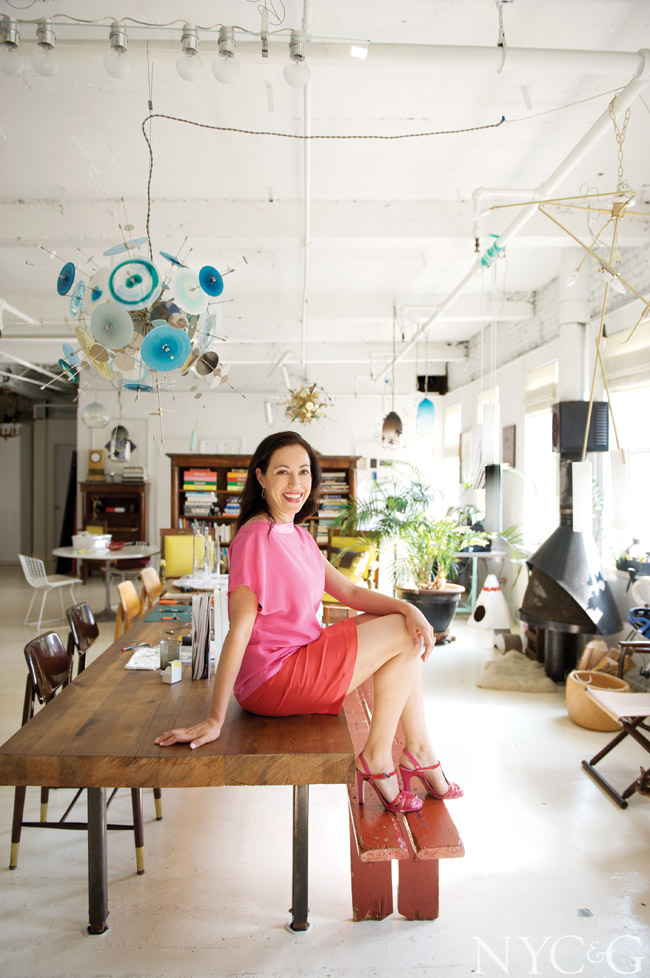 As all creative types know, inspiration can strike almost anywhere. The latest thing to catch lighting designer Andreea Avram Rusu’s eye? The graffiti that adorns New York buildings, which she has captured in photographs over the past several years. “It has richness and energy,” she says. “You see some of these walls around the city, and it’s like, Pow!” Graffiti’s bold colors and dazzling graphics have deeply influenced Avram Rusu’s newest collection, Continuum, her fifth since she established her firm, Avram Rusu Studio, a decade ago.

A native of Romania, Avram Rusu immigrated with her family to the United States and received a degree in architecture from the University of Texas. A post-college job with an architectural firm led to a stint in Paris, where the City of Light’s sculptural beauty helped shape her aesthetic. “I learned how design should and can be interesting from all points of view,” she recalls. Avram Rusu later returned to the States to continue pursuing architecture, this time in New York, and began toting home her company’s scrap wood and fashioning it into lamps in her spare time. “I was very interested in light as a medium, and how it can transform an object.” The firm was so impressed with her fixtures, it began using them in photo shoots, which in turn garnered attention from clients who began requesting her pieces for themselves. A new business was born.

In her Williamsburg live/work studio, Avram Rusu constructs each fixture by hand, her creations—all at different stages of completion—hanging from the ceiling’s pipes. Local artisans and machinists fabricate many of the component parts, such as the glass accents and metal armatures, but “I closely oversee the construction of each piece,” explains Avram Rusu, who also designs furniture and vases. “If you don’t know how everything is made in a fixture, you’ll never know how you can improve it.”

The Continuum pieces, available at retailers such as Bespoke in the D&D Building, are an agglomeration of bent metal tubes, willowy hand-blown glass shades, and a variety of screws that secure sections together. Once Avram Rusu has all the pieces before her, she constructs the fixtures, customizing the size and arranging the twists and turns of each tube. She then secures the shades, which conceal lightbulbs beneath. “I didn’t realize how much of Continuum was influenced by graffiti until I looked back at my photographs,” explains Avram Rusu. “Visuals can be incredibly impactful—without your even realizing it.”

A version of this article appeared in the October 2014 issue of New York & Gardens with the headline: Bright Ideas.